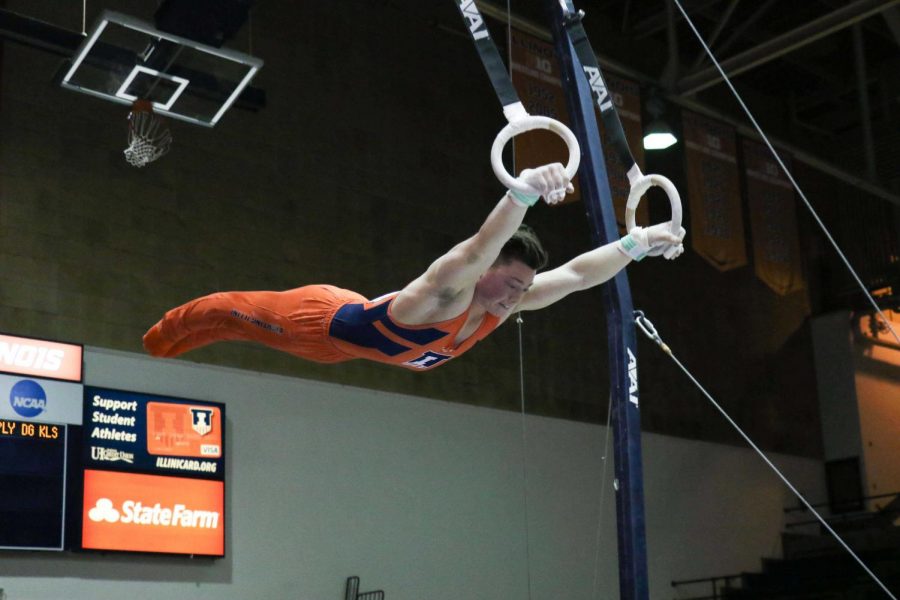 Illinois’ Alex Diab works the still rings at the meet against Minnesota in Huff Hall on Feb. 26, 2017. His score tied the season high.

The Illinois men’s gymnastics team finished out its regular season by losing to No. 9 Ohio State 406.6–404. The Illini have struggled down the stretch, losing their last three meets, and their last win came nearly a month ago on the team’s senior night.

The Illini were leading through five rotations 343.35–340.8, but the final rotation —  parallel bars — plummeted the Illini’s chances and the Buckeyes pulled off the win. Even though the Illini fell short, head coach Justin Spring didn’t seem worried about the team, even about their performance on their final rotation.

The Illini were once again led by senior Alex Diab. He came out strong with his floor routine, but his day was highlighted by his performance on rings, horizontal bar, and the vault. Diab came out with another rings title and he had the second highest score on both the horizontal bar and the vault, both over 14 points. Another standout for the Illini was Michael Paradise.

The Junior continues to show why he is one the best in the nation on the pommel horse. In spite of Paradise competing in just one event, he continued to have a big impact on the Illini’s success. Against Ohio State, Paradise scored a 14.7 on the pommel horse and came out with the event title again. Jacobson struggled on the parallel bars, but he helped the team on both horizontal bars and the floor with scores of 13.8 and 14.15, respectively. Jacobson also came out with the event title on the floor.

This meet marks the end of the regular season for the Illini, but now they will look forward to the Big Ten Championships April 4-6. Last year the Illini were Big Ten champions, and are optimistic about their shot at a repeat. This event means a great deal to the athletes, according to Diab, especially after last year’s success.

“My favorite moment was winning Big Ten’s last year as a team. That was the most fun competition I have ever been in,” Diab said.

The Illini will go to Iowa City on April 5 to compete in the Big Ten Championships before competing in the NCAA Qualifiers on April 19 at the State Farm Center.