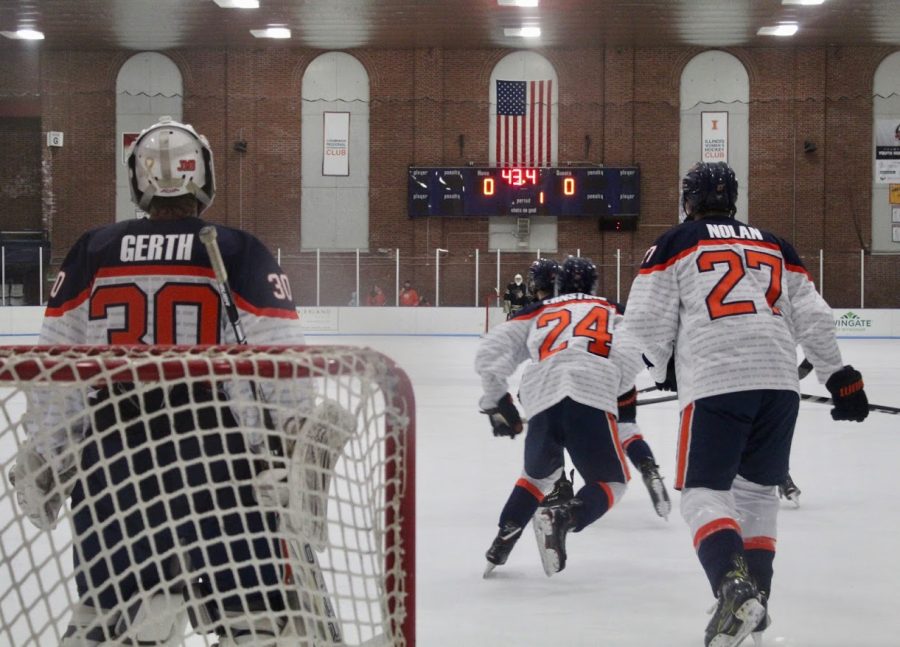 The Illinois vs. Lindenwood game at the Ice Arena on Friday, Jan. 18. Illinois lost 2-1.

It’s 7 p.m. Saturday night at the Illinois Ice Arena, and for the first night in a long time, it’s relatively empty.

After all, the Illinois hockey team’s season concluded after a loss to Minot State in Dallas just a week ago. For a brief moment, the ice on the rink shines like crystal, and the deafening silence creates an atmosphere akin to a large, empty fridge that has closed its doors to the general public just over four and a half hours ago.

But it doesn’t stay that way for long.

Within an hour, a small crowd of attendees slowly fills up overhead seats. Shortly, two hockey teams take the arena, met with a thunderous cheer from the small crowd.

Most of the players’ hockey pants don’t match. There are a plethora of colors out on the ice, from navy to red, off-colored yellow and some green can be seen as well. As the warmup clock finally winds down, Jim Cornelison, the singer of the National Anthem for Blackhawks home games, takes center stage.

“Jim’s an awesome guy. For the longest time, I’ve wanted to be on the ice while he did the anthem because I knew it would be an incredible experience,” said event organizer Matt Morrow. “I just messaged him on Facebook, he got back to me about his prices and we just went from there.”

Standing parallel are the two teams that will be playing, mostly wearing blue and white variants of the same uniform. Members of Sigma Phi Epsilon and Phi Delta Theta represented the white team while the blue team was represented by Acacia and Delta Tau Delta. The uniform has a logo in the middle of it, which is an orange-colored Alma Mater with the words “Gottheil Cup” scrawled across.

“The cup is a charity game hosted by four fraternities here on campus,” Morrow said. “It benefits the Josh Gottheil Memorial Research Fund. It’s the fifth year that we’ve been doing it, and each year, we’ve been able to expand the event as a whole.”

Each period is only 13 minutes as opposed to the standard 20-minute periods in a normal hockey match. After six minutes of no scoring, the blue team rattles off two points less than a minute apart from each other between the eight- and seven-minute marks. The shots are answered by a goal from the white team just a minute later to make the score 2-1. The rest of the period is scoreless and highlighted by opposing sides of the audience chanting back and forth.

“We just do this one game every spring,” Morrow said. “We may expand the game to be more like a tournament if we can generate enough buzz around the event going forward, but as of right now, nothing of that nature is in the works.”

The game is marked with several one-on-one setups between goalie and attacker. It’s like a shootout, but a majority of the attempts come up just short. As the second period starts, one of the blue players freezes the opposing goalie and scores with less than a minute to go. Then, in a sequence like the halfway point in the first, the blue team scores again, with one crafty maneuver, causing the white goalie to give up an opening on the left side resulting in the failed save. A brief, heated exchange electrifies the ravenous crowd, who chant back and forth even louder.

Early in the third, another hard collision leads to another goal, thanks to a more prolonged and heated exchange involving nearly every player on the ice. After some passionate back and forth, play resumes. The rest of face-off remained uneventful outside of one final goal by the blue team, allowing the team to win the cup by a score of 7-2.

“The size of the crowd was as big as it’s been over the past few years, so I think we raised our goal,” Morrow said. “Both sides had a lot of fun, and every year it seems like a different team wins, so the whole experience was cool.”