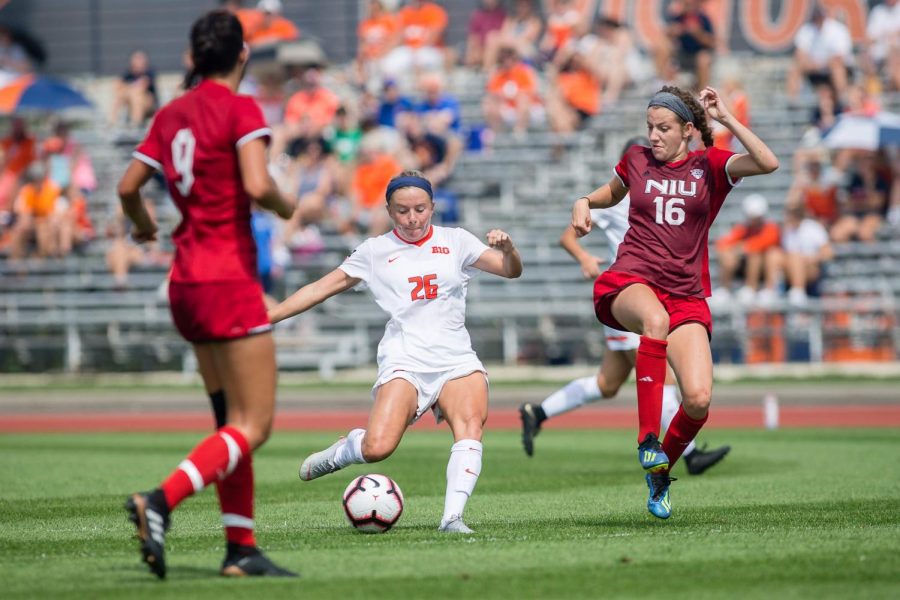 Illinois midfielder Katie Murray passes the ball during the game against Northern Illinois at the Illinois Soccer Stadium on Aug. 26. The Illini won 8-0.

When Illinois set up its spring soccer games, it probably wasn’t imagining kicking off in sub-40 degree temperatures with high winds and freezing rain pounding away at the Illinois Soccer Stadium.

Nevertheless, when Illinois kicked off against Illinois State Saturday, the conditions were less than ideal.

The game was pushed back two hours from its original start time to try and avoid the inclement weather, but the sloppy conditions not only continued, but made it difficult for either team to get its footing in the match, which ended in a 1-1 draw.

The Illinois soccer team is set to play four matches this spring, and Saturday’s matchup with Illinois State marked the first. The spring games are just friendlies with slightly different rules tailored to help coaches experiment with their teams.

The games will be much more relaxed than regular season games, as the teams will play three 30-minute periods and stray away from the typical 45-minute halves while also allowing more substitutions. This lets the head coach Janet Rayfield move her players all around the pitch, trying new combinations, positions and formations.

During the season, the team had a lot of success playing in the 3-5-2 formation, but broke out a few four-at-the-back formations to give teams a different look. With senior defender Patricia George and top-scoring senior Katie Murray being part of the five-player graduating class, the Illini coaching staff will likely need to change their tactics heading into next season.

The defense in particular is a point of interest for the Illini this spring, as it will have to find replacements for George and fellow senior Morgan Maroney, who both started all 20 matches for the Illini last season. Rayfield will have to find new partners for Alicia Barker and All-Big Ten Freshman Ashley Cathro next season, and the spring games will give the coaching staff a chance to further assess the talent they have in-house.

One thing the Illini can still count on, though, is the scoring prowess of their midfield. Nineteen of the 34 goals the Illini scored came from midfielders, and despite losing Murray, the Illini will return starters junior Arianna Veland and sophomore Hope Breslin, as well as freshman Peyton Willie, one of the first women off the bench for Rayfield. The trio combined for nine goals and seven assists last season, and with Murray no longer in the picture, Willie will have a chance to step into an even bigger role next season.

Even though the Illini are bringing back some of their top scorers, losing Murray’s eight goals and four assists is still a big blow to the Illini’s attack. The Illini may have to rely more on their forwards to carry the brunt of the scoring load in the future, and Rayfield has the players to do it.

The Illini had a strong front two pairing of junior Kelly Maday and freshman Makenna Silber, who put the ball in the back of the net nine times between the two of them. Silber’s contributions as a freshman earned her an All-Big Ten Freshman team nod, and Illini fans should be excited to see if she can dial it up even further in her second season. Maday proved to be important not only in terms of her scoring but her link-up play last season, assisting almost as many goals as she scored over the course of the season. With Maday bringing three years of experience to join Silber with a full year of growth, the Illini look potent going forward.

Rayfield and the Illini coaching staff have four games over four weekends to tinker with the lineups and test out different combinations of players. After taking on the Illinois State University Redbirds at home, Illinois will take a road trip with stops at Missouri and Louisville before returning home on April 19 to host the Purdue Boilermakers.