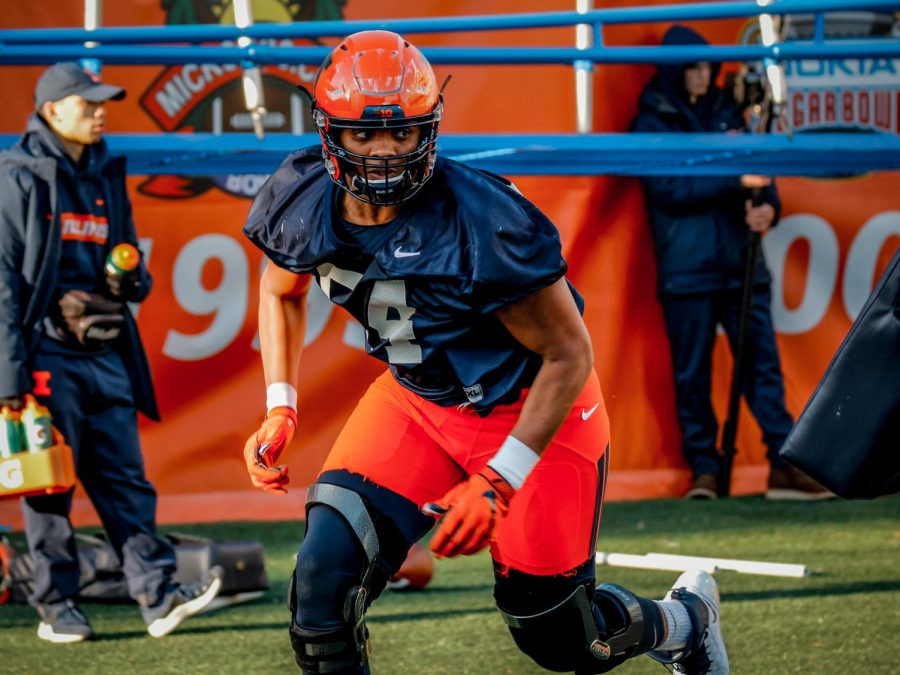 Kendall Smith came to Illinois from Bolingbrook High School as a receiver.

Two years later, after being moved to safety in 2018, Smith is back where he started. The 6-foot-1-inch, 200-pound athlete is a welcome addition to an Illinois receiving corps that’s admittedly thin and lacks proven Big Ten talent.

Smith aims to change that narrative this fall.

“As far as being a receiver, I would say I’ve got pretty good hands,” Smith said. “I’ve just got to work on being more consistent with them. I think I bring physicality to the receiver corps. I bring competitiveness, I’m just going to bring everything I’ve got. I think we just need another guy out there that can just make some catches, make some big plays.”

With the new redshirt rule, Pearl was able to maintain his year of eligibility while playing in two games, registering a tackle at Nebraska and 0.5 tackles-for-loss at defensive tackle.

Now, the coaching staff has moved Pearl to the other side of the ball, where he’ll play tackle. The switch isn’t a surprise for Pearl, who Illinois recruited primarily to play tackle anyway. With a lack of depth in defensive line coach Austin Clark’s group last fall and Pearl’s desire to play on defense, Illinois let him try his luck there.

But now, after undergoing an entire offseason regimen, getting acquainted with returning strength and conditioning coach Lou Hernandez and adding roughly 50 pounds to hit 290, Pearl sees the logic in the move.

“It really didn’t catch me as that much of a surprise,” Pearl said. “Originally I came in with the option to play tackle. I’m alright with (the switch) happening because I know that it’s probably better for me in the future,  and I know that the team probably needs me to be at that position more than they need me at defensive end.”

The position changes for both players come at a time when head coach Lovie Smith is emphasizing improved depth on the roster, something Illinois has notably lacked during his first three years in charge.

Lovie hasn’t hesitated to admit his roster has lacked the needed depth to compete in the Big Ten, and recent position switches are signs of where the staff feels it can afford to experiment.

Illinois has options along the defensive line, with several proven contributors and a host of incoming and returning young talent. Similarly, the Illini are coming of age in the secondary.

But at receiver and on the offensive line, the situations are starkly different.

Illinois has few options after junior Ricky Smalling made a compelling case at wideout, and Lovie, along with offensive coordinator Rod Smith, feel Kendall can contribute at the position because of his experience and athleticism.

Similarly, the staff likes how Pearl has progressed with his conditioning regimen; As he fills out, he can be molded into a capable offensive tackle in a group of offensive lineman that lacks much depth beyond the first group.

“You look at all the good programs, they have depth,” Lovie said. “Injuries happen. You don’t wonder (if they will), injuries are going to happen. That’s why at just about every position, you are going to go two-deep at a minimum through the course of a season.”

Each player has his work cut out for him, with a lot of learning to be done and progress to be made before potentially seeing meaningful playing time this fall.

But the motivation to do so is certainly there.

“I’ve got a new O-coordinator, so I want to show (Rod Smith) my skillset personally,” Kendall said. “I want him to see what I can do. Then I just want to get better. I want to show my improvement from my freshman year until now. I want to show that I’ve gotten better and make a good first impression.”

Despite coming to Illinois ranked as the No. 100 wide receiver in the country by Rivals (No. 138 by 247Sports), Kendall has largely struggled to make an impact in either of his first two seasons at Illinois.

He played in all 12 games as a freshman, almost entirely on special teams, making one tackle. Kendall also played in fewer games in 2018, but he was able to make a few plays. He forced a fumble against Western Illinois and had 10 tackles on the year, including three at Maryland in late October.

The early assessment on Rod’s fast-paced offensive philosophy is a positive one from the Bolingbrook, Illinois, product.

“It’s definitely a transition,” Kendall said. “The first offense I had my freshman year wasn’t nearly as fast; it was a huddle-up. Now it’s all run based off signals, but I think it’s good for us.”

He feels his year on the opposite side of the ball will benefit him now, as he’s developed an understanding of the objectives, mindset and tactics of defensive backs.

The biggest thing Kendall can carry over from his time at safety is the physicality necessary to win battles in coverage.

“You’ve got to bring a little more physicality, but offensively I think you should bring just as much to match that,” Kendall said. “The most physical player is the one who is going to be the one who wins the rep every time. I think being on defense was good for me. It gave me a more defensive mentality, a more physical mentality, so I’ll be able to bring that and match that with any defensive back I go up against.”

For Pearl, the focus is a bit less on making an immediate impact, but he wants to make one nonetheless. He knows he’s got a tougher path to playing time, with time not on his side and with several more proven options ahead of him at tackle and along the line.

Pearl isn’t caught up in the short-term, but he certainly wants to do what he can this season to help the Illini.

While he expects it will take time for the Danville, Illinois, native to settle in and adapt to stopping Big Ten defenders from getting into the backfield, Lovie offered a promising assessment of Pearl.

A year into being an Illini, Pearl has progressed significantly in Lovie’s eyes, though there is a long way to go.

“The plan all along was (when) we recruited Julian, we saw and knew he would be a big man,” Lovie said. “He showed a lot of athletic ability in high school. He was a good basketball player. He has grown. I don’t know if he told you how big he is, but he’s offensive tackle size. I’ll just say that. With that same athletic ability, he’s got a chance, but he’s a green player, a young player. He has a chance to be a pretty good football player, but he has a long ways to go. He’s in his right spot. We recruited him to play offensive tackle for us.”

For each player, making their mark at Illinois hasn’t been straightforward, but the work they need to put in to do that is clear now. Kendall summed up his process, saying he was happy for the opportunities he’s had, particularly playing on special teams.

But now, it’s time to really step it up.

“It’s been good,” Kendall said. “There’s nothing wrong with playing special teams, I appreciate being able to do that because a lot of times at the next level, that’s how you make a team in the first place. So I’m glad to have that on my resume my first two years. I’m not too upset about (not playing much). Now I’m ready to take on a real role on the team. I feel like now is my time to do that.”