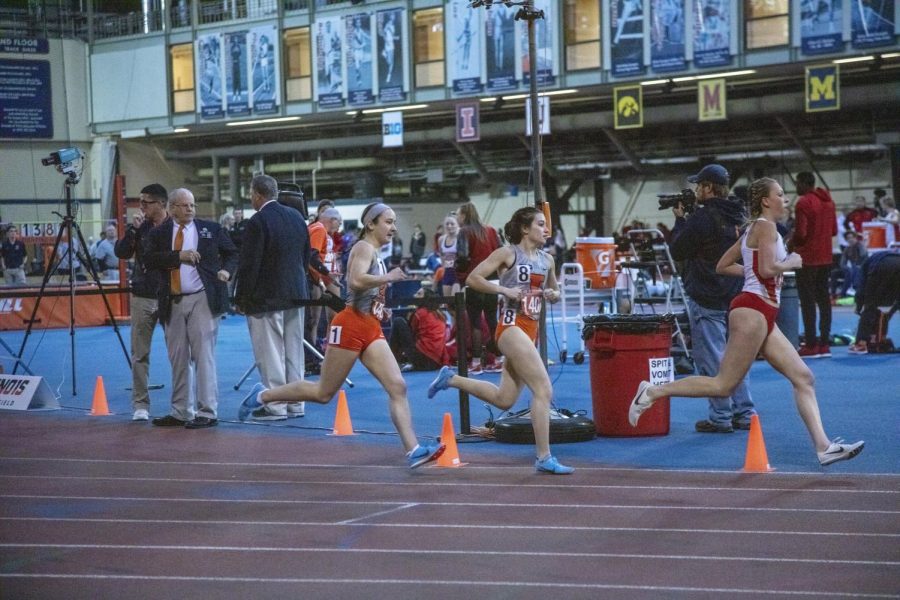 Madison Marasco (1) and Rebecca Craddock (8) run in the 1-mile event on Jan. 26 at the Armory. Head coach Michael Turk was inducted into the Illinois Athletics Hall of Fame in April.

The Illini track and field teams continued their strong outdoor start across the country Friday in Stanford, California, and Saturday at the University of Mississippi in Oxford, Mississippi.

The women’s and men’s 4×100-meter relay teams finished in first at Mississippi with times of 45.14 seconds and 39.82 seconds, respectively.

Junior high jumper Noah Adams won the event with a jump of 2.11 meters. Adams finished fourth at Southern Illinois on March 23 with a jump of 2.02 meters. Going into this weekend, Adams was ranked and tied for at No. 70 with that jump. This week, Adams worked on his high jump form, which helped him improve.

“We’ve been working a lot on my approach going up to the bar,” Adams said. “Getting that spot-on is pretty important, obviously, because if you don’t get that right, you’re gonna have issues.”

A handful of distance runners competed in California due to the better distance competition, with sophomore Allison McGrath and senior Billy Magnesen competing in the 10K at the Mike Fanelli Track Classic in Hayward, California. Sophomore Mikaela Lucki and redshirt senior Denis O’Callaghan competed in the 1,500-meter run at Stanford.

McGrath finished the 10K in 35 minutes, 46.99 seconds, which is the ninth-fastest time in program history. She finished 16th in the event overall in her first time running the race in her collegiate career. With a time of 30 minutes, 48.15 seconds, Magnesen finished in 53rd. At Stanford, sophomore Mikaela Lucki finished second in her heat with a personal best of 4 minutes, 26.56 seconds, and O’Callaghan finished third in his heat with a time of 3 minutes, 50.52 seconds.

Lucki said the outcome of her race was different than she expected.

“Going in, my seed time in that heat wasn’t one of the fastest,” Lucki said. “I ended up leading the first two laps of the race, which I haven’t ever done.”

The rest of the team competed at Mississippi in a meet featuring strong performances from the Illini. The Illini did well in the high jump with Adams’ finish and the triple jump, where sophomore triple jumper Thomas Saggau finished in first with a jump of 14.62 meters. Senior long jumper Briana Driver finished in fourth with a jump of 6.09 meters.

Last weekend, there wasn’t a team score. While it was a good weekend for the Illini, the team focused more on the mental aspect of track, such as taking more risks in strategy, in practice this past week.

“After our first outdoor meet, we talked about tightening up some of our focus,” Turk said. “What we really did was we really tried to challenge them to be a little more risky, take risks in their competitive efforts.”