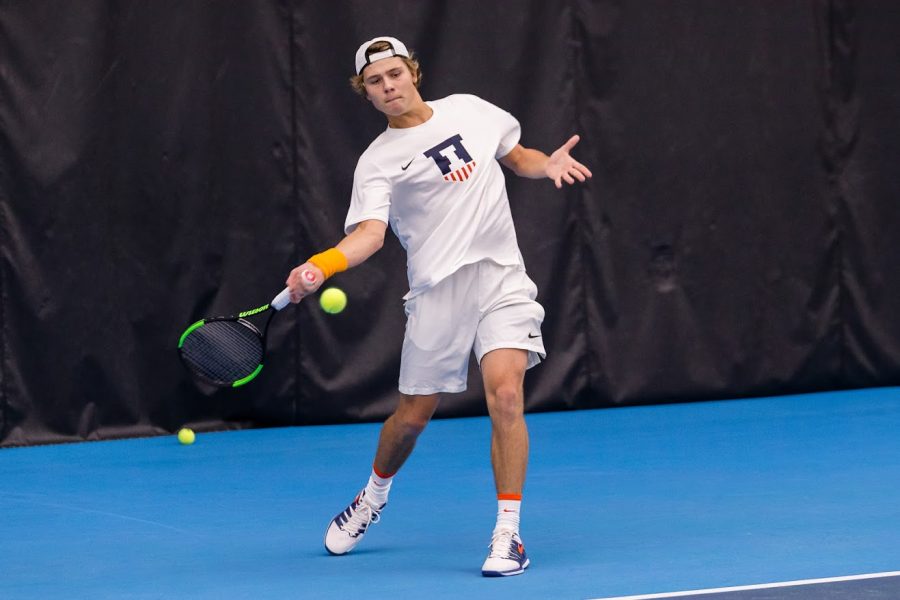 Illinois’ Aleks Kovacevic swings at the ball during the match against Duke at Atkins Tennis Center on Feb. 1, 2019. Kovacevic was one of the 73 Illinois student-athletes to be named to the spring Big Ten Academic All-Conference team.

With a 7-5, 6-2 victory against Iowa Hawkeyes’ Kareen Allaf last Sunday, junior Aleks Kovacevic won his 12th consecutive singles match. So far, the Illini remains 12-0 since the start of 2019 and has defeated six ranked opponents during that stretch. He also remains undefeated against Big Ten opponents in his collegiate career, improving to 19-0.

“The Big Ten means a lot, not just to me but the coaches and this University. So it’s really good for me to contribute to winning anyway I can, especially against a Big Ten opponent,” Kovacevic said. “I honestly don’t think too much about it. I try to bring the same mentality of wanting to win in every match I’m in. Me being undefeated in the Big Ten just feels like a bonus. Any of these personal accolades or statistics about me are great, but it’s not something I worry about.”

After the win at Atkins Tennis Center, Kovacevic improves to 23-3 on the season and is poised to set a new career high for wins in a season with 25. This season, he has emerged as one of Illinois tennis’ biggest contributors, but his breakout season is far from surprising.

The New York City native has played tennis nearly all of his life and recalls living incredibly close to, and frequently playing at, the Central Park tennis courts growing up.

“My parents would go there for fun, and over time they gave me a racket to start playing clinics there,” Kovacevic said.

Kovacevic moved to Florida when he was 15, and from there he began to take tennis more seriously. After competing in a professional qualifier, Kovacevic was pointed in the direction of head coach Brad Dancer and the University.

“I didn’t really know much about the school outside of them ranking well and their tennis program,” Kovacevic said. “So I (kind of) just reached out to (Dancer), shot him an email, came to visit and committed fully until a couple of weeks before school started. Everything seemed right, so I decided I was going to go here.”

Life as a college athlete provided a new set of challenges for the once-homeschooled Kovacevic. Before, he was accustomed to putting tennis first, with his education being supplemental to his training. But as a freshman, Kovacevic had to re-familiarize himself with a more traditional school routine, as well as balancing running, lifting and hitting practices with a new course workload, which left him little time for other activities.

“As an incoming freshman, I just wanted to play. I wasn’t the best recruit coming in. I mean, I was decent, but I wasn’t outstanding,” Kovacevic said. “So I was just lucky to be in a position where I could play in every game and gain the experience of playing in front of the fans at Atkins.”

Kovacevic is a student in Business. The combined workload of his major and tennis have taken up a bulk of his time and energy. He’s even found himself questioning whether he really wanted to pursue business because of his taxing schedule.

“It’s tough,” Kovacevic said. “But my dad is knowledgeable about finance, and I’ve always been good with numbers, so I figured that would be a major that fit me well. I like to be challenged, and it’s tough to balance both, but I’ve found my ways to do just that.”

The rest of the tennis team has done a lot to facilitate Kovacevic’s growth, both as a tennis player and as a student. Since he’s always hanging around his teammates, Kovacevic likens the bond he shares with his teammates to the bond of a group of fraternity brothers. Most of the team lives together and trains together and Kovacevic said he’s always, receiving the necessary motivation.

“My work ethic has gotten better, but I wouldn’t say that’s my strong suit. If you ask other coaches, I don’t know if they’d say that I’m the hardest worker on the team,” Kovacevic said. “But I’ve been doing a lot better in that aspect since I’ve been here because I have the right guys in my corner pushing me. Now I know what college tennis is all about, and I’m comfortable in the position I’m in. As I’ve gotten accustomed to my workload, I’ve become content with where I’m at right now.”

As the tennis season winds down to its final stretch, the Illini move to 11-6 overall and 5-0 against Big Ten opponents. The team has six more Big Ten matchups before the start of the Big Ten Championships, and Kovacevic will look to improve upon his 12 match win streak and continue to keep his undefeated record. There’s still a ways to go, but Kovacevic looks poised to continue improving and pushing forward.

“Work ethic, like I said, is probably what I can work on the most to improve. My day-to-day life as a student-athlete can be tough, but I remember there’s other people out here putting in the work, too,” Kovacevic said. “If you’re sleeping, somebody’s working. I’m going to continue to take each practice and each match one day at a time and try my best to win.”