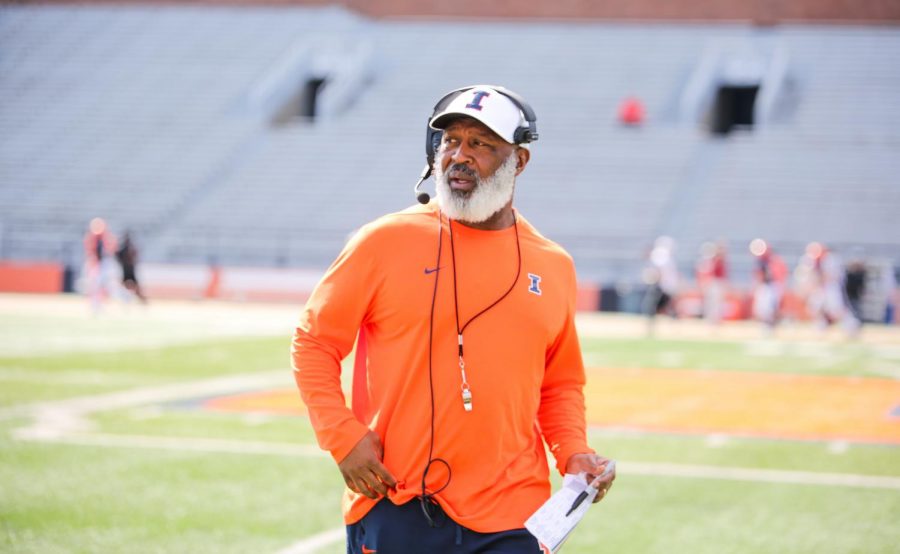 Three seasons removed from Lovie Smith’s decision not to retain Mike Bellamy on staff, Illinois football is in nearly the same position it started in when Smith arrived. Now, Smith has brought Bellamy back, but in a different role.

After working with receivers for three years at Illinois, Bellamy is working with the running backs in his second go-around. Taking control of what was a much-improved Illinois running game in 2018, Bellamy knows he’s got a lot to work with.

Powered largely by Reggie Corbin, who had a breakout junior campaign, rushing for 1,085 yards on 128 carries, which is 8.5 yards per carry, Illinois ranked No. 12 in rushing offense, with 243.0 yards per game.

Bellamy inherits a position group that has had success — unlike some other areas of the field for Illinois — and experience.

Along with Corbin, juniors Mike Epstein and Ra’Von Bonner and fifth-year senior Dre Brown return as capable backs that have done well at times in offensive coordinator Rod Smith’s offense.

And though they combined for 35 yards on just seven carries in four games, redshirt freshmen Jakari Norwood and Kenyon Sims now know the offense and have a full offseason under their belts.

After assessing the talent and skills he has available at the position through two weeks of spring ball, Bellamy feels he has a capable group that can take another step forward in 2019.

Bellamy, who coached the wide receivers for two years at the University of Toledo and was a quality control analyst at Mississippi State in 2016, knows he is a piece of a larger staff that wants to work cohesively and efficiently to improve on Lovie Smith’s 9-27 start at Illinois when the fall comes around.

He wants his messaging to be consistent with the rest of the staff and isn’t focused on trying to make major changes to how Illinois runs the football or manages its players.

The former standout Illini receiver wants to be a complement to the staff, not a foil.

“You don’t want to be a guy that comes in and say, ‘I want to do it my way, these are all the changes,’” Bellamy said. “I tell them, even from the standpoint of some of the drills we do, ‘I’m just giving you tools for your toolbox.’ In the coaching and meeting room, I just want to be another voice, a part of the puzzle.”

Alabama transfer Petitbon knows what it takes to win

Graduate transfer Richie Petitbon has learned a thing or two about what it takes to have a winning program.

Petitbon won two national titles as a reserve offensive lineman at Alabama in 2015 as a freshman and again as a redshirt sophomore in 2017, during which he played in three games.

With experience at guard and tackle, Petitbon can play virtually anywhere on the line and brings a wealth of experience to a group that lacks proven depth.

Illinois and Alabama are clearly vastly different programs, but Petitbon sees consistency in what it takes to succeed in college football.

Beyond the mental areas of the game, Petitbon’s 6-foot-4-inch frame and 315-pound weight are welcome in first-year offensive line coach Bob McClain’s group.

Illinois returns most of the core from an offensive line that gave up 2.25 sacks per game, which was T-No. 67 in the NCAA, and received considerable credit for the success of the running game.

But the Illini did lose veteran guard Nick Allegretti to graduation, and Petitbon could slide into a role as a capable option at right guard and as a veteran leader.

He has also set out to make an impact with his physicality, where he can bring the experience of facing high-end defensive linemen at Alabama and apply it while sparring with the Illini’s defensive linemen.

“For me, being a fifth-year guy, I’m 22 years old,” Petitbon said. “I’ve been in the college weight room for a long time, so I like to pride myself on being very physical. I just want to compete every play and give everything I have, try to be the most physical player I possibly can, move people off the ball and be able to protect the quarterback as well. That’s what I’m excited about.”

Another notable transfer, sophomore Luke Ford, is easing into action with Illinois this spring as well.

Ford, a Carterville, Illinois, native is returning to his home state after a freshman season at Georgia in which he played in every game, but mostly on special teams, where he had one four-yard reception.

As a four-star recruit, Ford was the No. 3 tight end, the No. 51 recruit overall and the top prospect in Illinois. Though he took his first unofficial visit to Illinois, Ford ultimately chose Georgia over Alabama, Texas A&M, Auburn and Illinois.

Ford said his decision to transfer was entirely family-based, and now that he has been at Illinois for two weeks of spring practice, he’s beginning to get acclimated.

“I’m having a good time,” Ford said. “I think I’m fitting in well, adjusting well. I have to keep working hard, learning the plays.”

Ford is expected to win the starting job as a tight end, though he will have to displace sophomore Daniel Barker and senior Bobby Walker. Barker had nine receptions for 84 yards and one touchdown, playing in all 12 games and starting three, which was the sixth-highest number of starts for a true freshman at tight end in program history.

Walker played mostly on special teams, but appeared in every game and seems to be trusted by the staff, which awarded him a scholarship for last year after he walked on as a freshman in 2015.

Ford knows time isn’t on his side, but he is confident he’ll be able to contribute to Illinois right away. The 6-foot-6-inch, 250-pound Ford feels he fits in well with the high-paced Illini offense, which could end up targeting Ford quite frequently as a pass option, depending on how well he adjusts.

He has another couple of weeks of spring ball to learn the scheme and build rapport with quarterbacks M.J. Rivers, Matt Robinson and Coran Taylor before training camp in August.

“(The staff has) been a tremendous help in working with me, spending extra time trying to get into the offense and stuff,” Ford said. “All of them have made it a homey, loving environment. It’s been an awesome transition. They also push me really hard out there on the field, try to get the best out of me every day.”