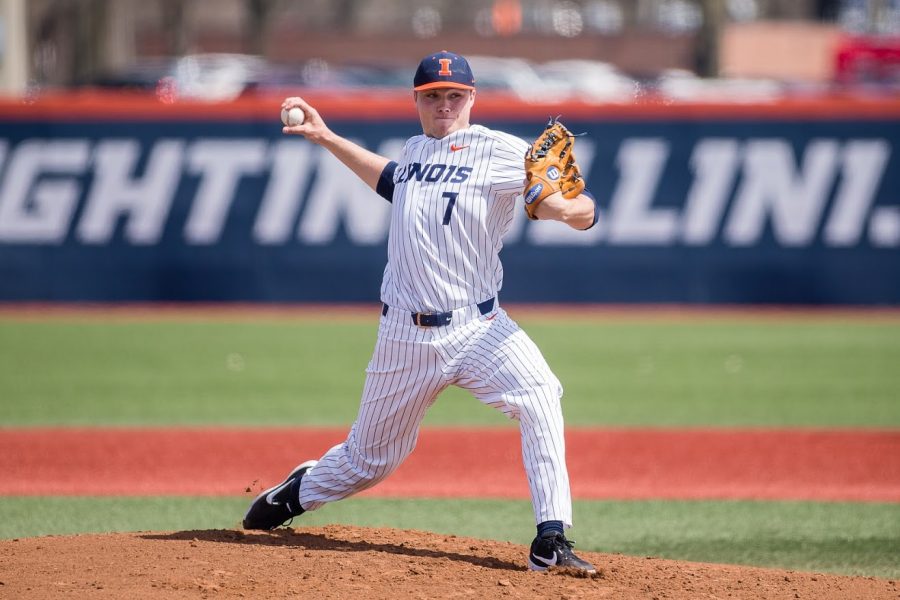 Illinois starting pitcher Ty Weber delivers the pitch during game one of the doubleheader against Maryland at Illinois Field on Saturday. The Illini won 5-1.

Puppies and moms were bountiful under the shining sun at Illinois Field this weekend, but the Illini baseball team couldn’t keep the good mood going as they lost 2 of 3 to the Terrapins.

It was a continuation of the recent Illini struggles, and the team has now lost six of their last nine games.

The first game was a heartbreaker for Illinois. Senior starter Andy Fisher pitched a strong game for the Illini. His final line of 8 1/3 innings, three hits and two runs are misleading. Fisher was pitching what some might call a “gem” going into the ninth inning. Before starting the ninth Fisher had allowed just one hit in the game, and he looked ready to lead the Illini to victory and complete the shutout.

It was the ninth inning that spelled the end for the Illini, who were leading 2-0 at that point. Fisher gave up two hits to start the frame, putting runners at second and third. A sacrifice bunt brought in the Terrapins’ first run, at which point Fisher was pulled.

“I wanted to finish it,” Fisher said. “I talked to the pitching coach I told him, ‘I got this’ and just ran out of gas.”

Junior Garrett Acton was called upon to slam the door and seal the win, but his struggles continued as his control issue reared its head again. A hit batter and a wild pitch led to two more Maryland runs, which would ultimately spell the end for the Illini. They lost 4-2.

About 24 hours later though, the first half of Saturday’s doubleheader started on a positive note for the Illini.

Junior Ty Weber bounced back from his last start of just four innings against Iowa on Saturday afternoon. The Wisconsin-native went 7 2/3, allowing just one run in his outing.

Acton bounced back from his Friday performance to close the Terrapins out in this game, pitching the final inning. He still struggled with some control, walking a batter and hitting another, but the junior was able to compose himself and end the threat.

On the other side of the plate, Weber’s dominant performance was a nice compliment to a strong day put together by his offense, which put together five runs and eight hits.

Grant Van Scoy, of the errant bat flip against Coastal Carolina, had plenty to flip about in this game after hitting a double and a triple and driving in two runs.

Freshman catcher Jacob Campbell knocked in the other three RBI, two coming on a home run in the seventh inning, which was his first of the year.

In the second game, though, the Illini couldn’t keep it rolling

Junior Cyrillo Watson started the game and ended up making it into the sixth inning, but the third inning is what sunk him. A bunt single allowed the first run to score, and then a three-run home run gave the Terrapins a 4-0 lead that snowballed the rest of the game.

A dramatic sixth inning allowed the Illini to tie it up though, thanks to a string of hits put together by Michael Massey, Cam McDonald, Zac Taylor, Jack Yalowitz, Grant Van Scoy and Jeff Korte.

However, the bullpen once again could not hold on for the Illini, as Ryan Schmitt allowed Maryland to put up another four-spot, which would lead to the eventual final score of 8-4.

Next up the Illini will head to Normal, Illinois, and take on Illinois State. The Illini previously swept the Redbirds in March and will look to get back on track with this one-game tilt.

“We have to go one pitch at a time, one game at a time,” said head coach Dan Hartleb.  “Find a way to get our job done each and every inning, and we’ll be in good shape.”