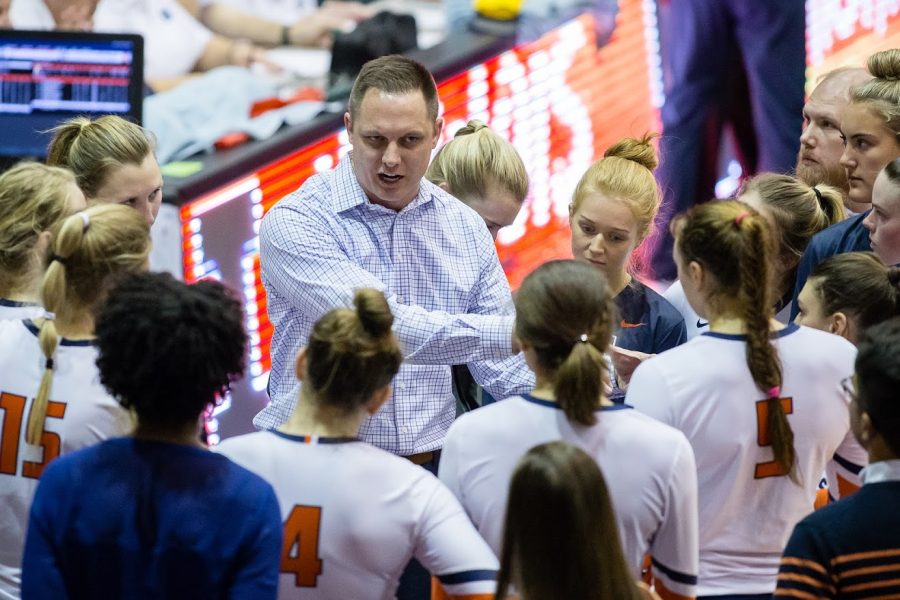 Illionois head coach Chris Tamas talks to his team during the match against Michigan at Huff Hall on Friday, Oct. 19, 2018. The Illini won 3-2.

Illinois volleyball will return to Huff Hall on Wednesday as their brief spring volleyball season draws to a close this week.

Wednesday’s matchup will feature a second spring showdown between the Illini and the Purdue Boilermakers, who faced off March 30 to start off-season play. Illinois will close out spring play in Peoria, Illinois this Friday, where it will compete against Bradley. Illinois’ home game will be its fifth of the 2019 off-season, as the team also participated in the KIVA Invitational in Louisville, Kentucky on April 6, playing against Lipscomb, Ohio State and Louisville at the all-day event.

Because spring volleyball takes place during the off-season, all games are considered exhibitions and no wins or losses are officially recorded. Generally, the spring season is used more for adjustments and skill development. This can often be crucial for teams in a position like Illinois, as the program already graduated senior setter Jordyn Poulter back in December and seniors Ali Bastianelli and Blayke Hranicka graduate in May.

Head coach Chris Tamas knows he isn’t the only coach in the NCAA who uses spring competition to rebuild and switch things up as needed, but that doesn’t stop him from encouraging competitiveness in his players — even when the final score doesn’t matter.

“I always want to win. I don’t want to say I never not like winning or whatever, but for what we’re trying to do I don’t (see any) relevancy to post any scores,” Tamas said. “It’s just kind of one of those things; it’s a lot of experimentation on our end and just seeing how people respond and how the team responds as a unit.”

Part of that experimentation includes adding in freshman Rylee Hinton and sophomore transfer Mica Allison into the mix; Hinton arrived on campus after graduating early from Champaign Central, while Allison transferred after a strong NCAA debut at Auburn.

As Illinois prepares to host Purdue this week, Hinton, Allison and the rest of the team will continue to shuffle positions — and will look to minimize any errors they might have made at the March 30 matchup.

“We played Purdue a couple weeks ago; I thought we played well. I thought we made a few too many errors where we normally wouldn’t have, but it was a nice venue,” Tamas said. “There’s a couple hundred people there in the stands and we hope to have the same, if not more, here coming Wednesday night just so we have that game-like pressure. We got to see (Purdue) once and they’re good, they’re a good Big Ten team. But so are we, so we just have to perform a little bit better and I just pretty much want to see us execute a little bit better.”