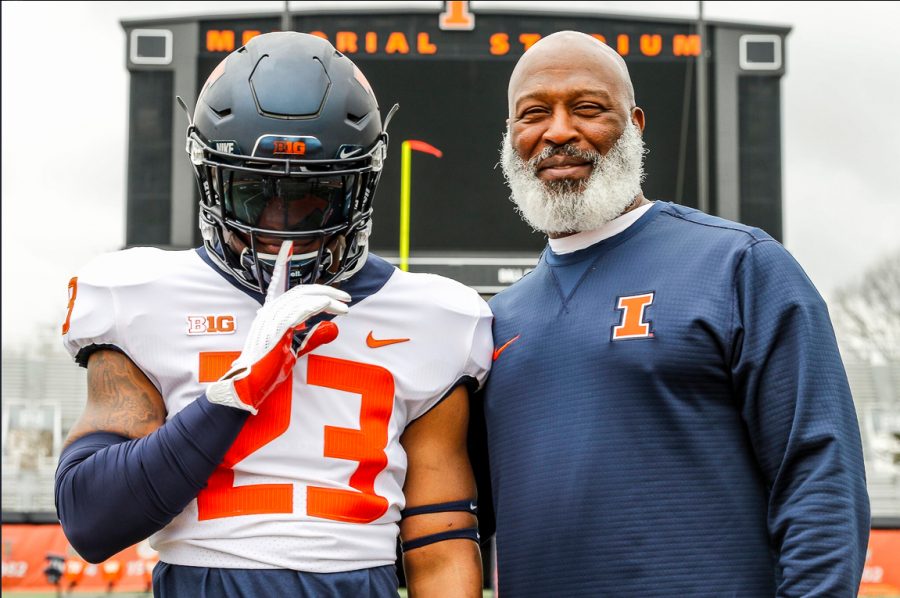 On Saturday, Illinois football had zero commits for the Class of 2020.

But that changed after the Illini took advantage of hosting a slew of elite recruits for its Junior Day, turning the visits into commitments.

By early afternoon on Monday, Illinois had racked up big-time commitments from three top-650 recruits. In about a 24-hour period, the only school in the Big Ten without a commit for 2020 had three, moving up to the No. 37-rated class nationally and up to No. 8 in the conference.

It started on Sunday afternoon when Harper, a standout offensive lineman at Simeon, shared his commitment on Twitter.

Harper, the No. 7 recruit in the state of Illinois, has a long, 6-foot-4 frame and 290-pound weight which Illinois can develop before the likes of juniors Doug Kramer, Alex Palczewski, Vederian Lowe and Jake Cerny graduate after the 2020 season.

He also adds future depth for newly minted offensive line coach Bob McClain in a position group that lacks experience beyond the expected first line. Redshirt-freshman Verdis Brown and Julian Pearl have shifted over to the offensive line during spring practice after playing on the defensive line last fall.

Harper had a slew of offers from programs Illinois regularly battles for recruits, including Iowa State, Nebraska, Indiana and Purdue, as well as Oregon, among others.

He’s rated by 247Sports as the No. 34 offensive guard in the nation and as the No. 638 recruit in the Class of 2020. While Harper posted a longer message on Twitter that thanked his family and coaches, Love kept his message simple.

He wrote “HOME” next to orange and blue heart emojis, to go along with a picture with head coach Lovie Smith.

Love, the No. 6 prospect in the state of Missouri, is a 5-foot-10, 190-pound running back who didn’t see the largest share of carries at Trinity because of stud back Alphonzo Andrews.

But he exploded in the state title game, helping to propel Trinity to a win with a career-best 201 yards rushing plus a touchdown.

He averaged 7.1 yards per carry and went for 539 yards on 76 attempts for the year. Love is now the third Trinity product to take his talents to Illinois since Patterson’s hire, joining four-star commits Isaiah Williams and Shammond Cooper.

Perhaps the Illini’s most notable achievement, though, was when four-star Marist wide receiver Jadon Thompson tweeted a short highlight video that included his commitment announcement.

Thompson is the highest-rated receiver Lovie Smith has recruited to Illinois, and is joining Harper as a top-10 in-state product (No. 5).

Rated as the No. 302 recruit and No. 55 wide receiver nationally, Thompson could come in next year and fight for playing time right away, given Illinois’ lack of depth and proven contributors at receiver.

It’s also only the second time Illinois has had two top-10 in-state recruits commit during the Smith era, a trend Illinois will look to build on as it battles on in some more high-profile recruitments.

Thompson caught 49 passes for 854 yards and nine touchdowns as a junior at Marist, where he turned heads with his athleticism and hands. At 6-foot-2 and weighing just 160 pounds, Thompson would benefit from some time to develop in the strength program at Illinois.

Currently, Illinois only proven contributor at receiver is junior Ricky Smalling, who caught 33 passes for a team-high 406 yards and five touchdowns.

Early commitments from well-regarded recruits like Thompson, Love and Harper could impact the Illini’s ability to draw other high-profile guys’ interest down the stretch.

Illinois is still in the mix for No. 1 in-state prospect A.J. Henning (No. 15 receiver nationally), No. 6 in-state prospect Denver Warren — who has offers from LSU and Michigan — and even Curie offensive lineman Kevo Wesley (No. 14 in Illinois).

Henning was with Thompson visiting Champaign over the weekend as a host of other priority Illini targets. He has offers from Alabama, Michigan, Notre Dame and Ohio State, as well as offers from more than 20 other schools.

As the recruiting process winds down, Illinois will rely on its current 2020 commits to help close down others, as it has from 2019 commits Marquez Beason and Isaiah Williams.