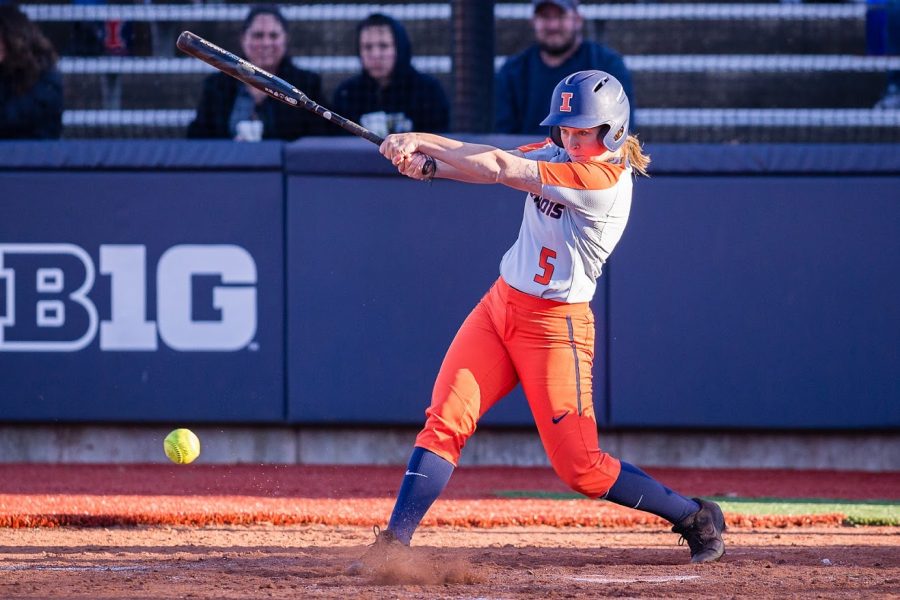 Illinois right fielder Kailee Powell (5) hits the ball during the game against Eastern Illinois at Eichelberger Field on Tuesday, March 26, 2019. The Illini won 8-7 in 8 innings.

Freshman year in college can be a hard adjustment for some students. You take harder classes, gain independence and have a roommate you barely know, if at all. You two have to share a small space and learn how to work together to create a living environment. You and your roommate are, pretty much, a two-person team.

While some teammates don’t get along or struggle to communicate, freshman softball players Kailee Powell and Avrey Steiner are the opposite. On the Illinois softball team, they have no choice but to be teammates, but they carry over that same relationship in their personal lives as roommates.

Being teammates both inside and outside of softball has helped shape the success of the freshmen duo who are often seen right beside each other on the field. After being the DP at the beginning of the season, Powell has begun to fulfill the starting first baseman position while Steiner starts at second base.

Steiner said she believes her friendship with Powell, which began in August, has benefited both of them in their softball lives as it’s always something they’re talking about, even at their dorm. Steiner said they do almost everything together, whether it’s walking to practice and workouts or mentally preparing for games.

“We come back to the dorm and still talk about stuff,” Steiner said. “We’re like, ‘Oh, you did this good today’ or ‘We should do this better tomorrow, like, set an example.’ So I think us having each other and continually talking about it and being able to live this life together has really made us more comfortable and have more fun. It’s awesome being able to play next to her and that we’re so close and come back and live together at the end of the night.”

Although it’s getting close to the end of their first season at Illinois, Steiner and Powell have continually brought the same energy and communication to practices and games.

Both Powell and Steiner have shown success and poise on the field, each player only committing three errors through this point in the season. While neither player leads the team in hits or batting percentage, the two understand their different roles on the team, whether it’s in the field or at the plate.

“Being on this team has made me realize that I have a job to do, and it may change from game to game, but I have to get that job done,” Powell said. “Going from DP to first base to outfield sometimes; whatever that job is that game, I have to do it.”

While Powell has begun to fit into her role on the team, Steiner has been adjusting and embracing being the ninth batter. Steiner said being picked as one of the nine players who gets a spot in the lineup is special.

“Whatever place I’m in, it’s definitely a role you have to take on, and I’ve really taken on that role of turning the lineup over so that our top of the lineup gets more at-bats, too, and that I’m on base to make more things happen,” Steiner said.

Since starting at Illinois in August, Steiner and Powell have both adjusted to the Big Ten level well, but the two have taken slightly different paths to get to the collegiate level.

For Steiner, the immediate love for the game of softball has shaped her life since she was about 5 years old. While she tried other sports at a young age, she knew early on softball was her thing, as she could never get enough of it.

“I would always go out and ask my dad, ‘Hey, can you hit me some fly balls? Can you set up the tee?’” Steiner said. “It was basically me, as a young kid, asking him to go out and do stuff rather than him making me go get some work in.”

Playing travel ball since she was 8 years old, the Ohio native started the recruiting process through travel ball at age 14. A visit to Illinois came later at age 16, where Steiner said she really bought into what assistant coach Laura Trout said about the development of the program under a new coaching staff.

A couple visits later and after talking with head coach Tyra Perry, Steiner began to fall in love with what she now calls her “second home.” After arriving on campus in August, Steiner focused on the “little things” in the offseason to prepare her.

“Over the fall, I was really just a sponge with everything they said to me,” Steiner said. “I just did the little things right, got bigger, faster, stronger, just play up to the level of (my) competition, and I trusted what they said and what the process they had for me over the offseason, and it worked out, so I’m really happy about it.”

While Powell also started playing softball at around 4 or 5 years old, the California-native fell in love with baseball first.

“I come from a very athletically based family,” Powell said. “My whole entire family loves baseball and we literally go and watch the Dodgers play every single time they’re home. Baseball has always been in the back of my mind, especially from a young age.”

After taking time to weigh her options and talking to Trout about a possible spot at Illinois, she said, Powell took a trip to Champaign, where she fell in love with the campus and its “movie-like” atmosphere.

From then on, Powell continued to love the program and school and has continued to mature as a player. Powell said her mentality when playing has been the most important adjustment.

“(For) me, it was basically mentality, staying strong and not thinking, ‘Well, I had one bad game, and that’s it,’” Powell said. “It was keeping a strong mindset and making sure that you’re always having that strong view on softball.”

While Steiner and Powell have grown and matured as their own players and fit into their separate roles in the softball program, the two will always be in it together. The two know after a rough game or practice they can come together to have a level-headed discussion and find a fix.

“It’s really nice to always have a person at the end of the day to go to if you had a rough day. Avrey definitely is that person for me,” Powell said. “That’s the main thing that gets us through college: just knowing we have each other’s back no matter what the situation its.”