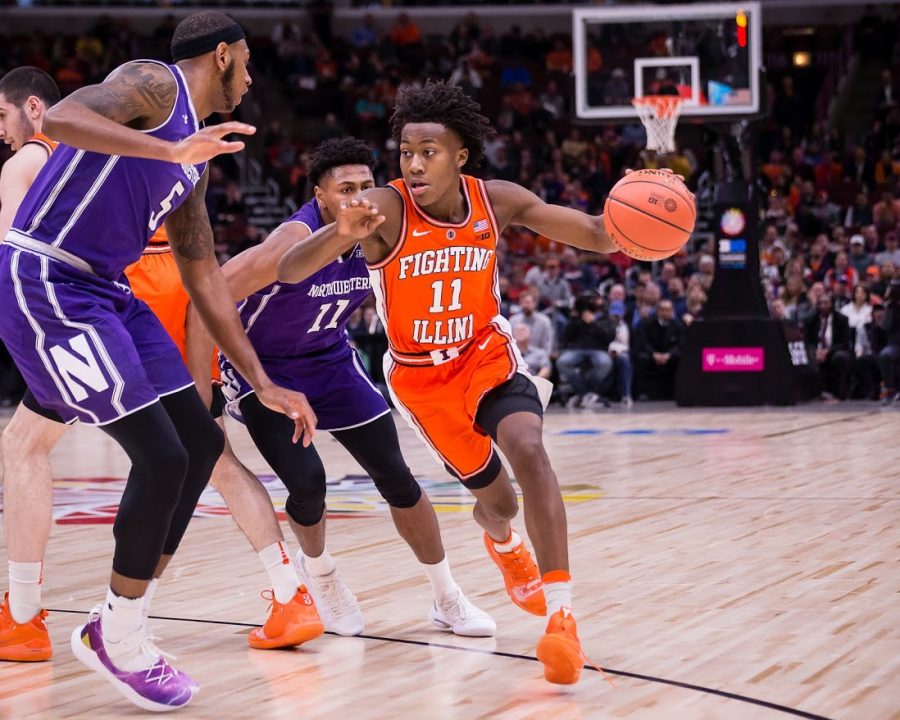 Illinois guard Ayo Dosunmu (11) dribbles around a defender during the game against Northwestern in the first round of the Big Ten Tournament at the United Center on Wednesday, March 13, 2019.

Illinois freshman Ayo Dosunmu announced on Thursday he will be returning for his sophomore campaign. Although there were overwhelming speculations he would come back and forgo the NBA draft, the decision may not have been as straight-forward as people thought.

The 2019 NBA draft pool is regarded as a weaker class overall — outside the top three prospects — and is particularly thin at point guard. After Murray State’s Ja Morant, there are no other point guards regarded as sure things, and if Dosunmu had gone through the combine and individual team workouts, he could have put his name in the mix to be the second lead guard taken.

Furthermore, if recent history is any suggestion, teams drafting in the first round are gravitating more and more toward one-and-done prospects, something that may have played on the freshman’s mind when making his decision.

However, the allure of professional basketball wasn’t strong enough to take Dosunmu away from Champaign. As he stated in a video posted to his Twitter account, there is still “unfinished business.”

Though he didn’t go through the full pre-draft process, Dosunmu is clear on what he needs to improve on after speaking to talent evaluators.

“(Scouts) just said ‘get bigger and stronger,’” Dosunmu said. “Touch my shot off a little bit better. Another year in the weight room, I really haven’t had an offseason workout because the last two seasons, in the offseason, I was rehabbing so now I’m a 100%.”

Dosunmu mentioned he will be trying to add between eight and 10 pounds of muscle this offseason when speaking to the media Saturday. The freshman is currently listed at 185 pounds but seems intent on bulking up this summer.

Adding more muscle should help Dosunmu improve both in finishing through contact at the rim and rebounding, two areas that will certainly improve his draft stock going into 2020.

Had Dosunmu come out and been drafted anywhere in the first round he would have made no less than $1.6 million in 2019-20 according to realgm.com, which is certainly not chump change. But Dosunmu feels confident he made the choice that will benefit him most in the long run.

“Of course every kid wants to fend for their family,” Dosunmu said. “But I talked to my family, and I talked to my mom and dad, and we thought that coming back was the best decision for me.”

The season ahead is likely a make-or-break year for head coach Brad Underwood. Illinois not only returns its top three leading scorers but also brings in a coveted recruiting class.

“You look at Virginia (and see) last year they lost (in) the first round then came back the next year and won (the) national championship,” Dosunmu said. “I just believe (in) this team a lot. I feel like we could accomplish so much. We have so many great pieces and (with) all the freshman coming back being sophomores we’re bigger, stronger. Me leading and you got Giorgi (and) Trent, everybody, I just feel like this is our year to accomplish a lot that hasn’t been accomplished in a long time here.”

While most would not predict Illinois to reach the same level of turn around that Virginia experienced this season, there is still plenty of reason for Illini fans to feel hopeful.

The team has many mouths to feed. Dosunmu and junior-to-be Trent Frazier have to be penciled in as the starting backcourt while Giorgi Bezhanishvili will also command a heavy workload. Beyond that, Andres Feliz, Tevian Jones, Alan Griffin, Kipper Nichols and incoming freshman Kofi Cockburn will all be hungry for playing time. There are concerns as to how Cockburn and Bezhanishvili will work together and if they will even be able to be on the court at the same time. Regardless, this team will undoubtedly have the talent, barring injuries and transfers, to make noise in the Big Ten.

Looking ahead to the 2019-20 season, many of the top teams from last year are losing key pieces.

Michigan State will be without Matt McQuaid and Kenny Goins due to graduation, while Purdue was dealt a major blow when Carsen Edwards decided to declare for the 2019 NBA draft. Michigan has also already lost Charles Matthews and is waiting on decisions from key pieces Jordan Poole and Ignas Brazdeikis. On the contrary, Maryland received a major boost when freshman Jalen Smith decided to return for his sophomore season.

The Big Ten has traditionally been a conference won by veteran teams, and unlike either of his previous two years, Underwood’s key players have at least a year of experience in his system.