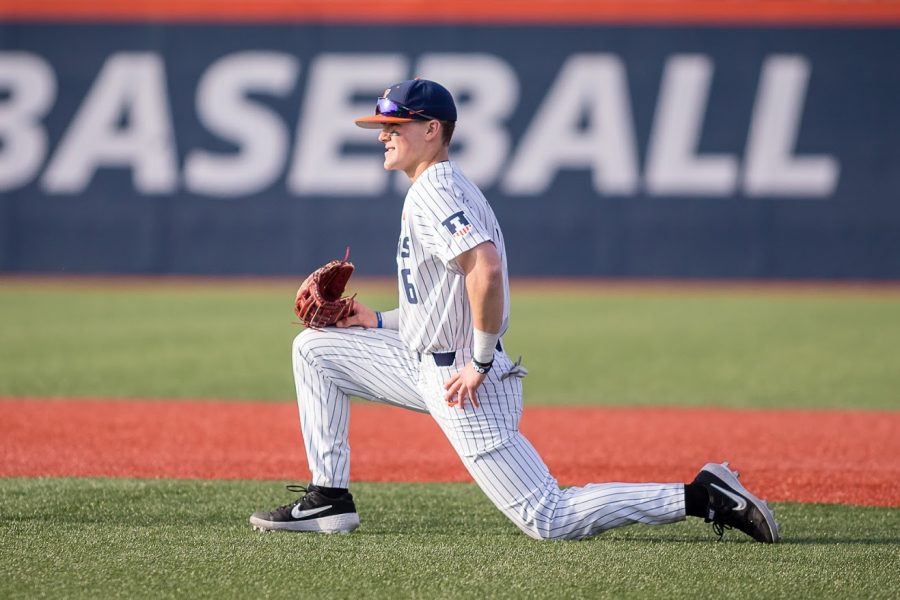 Designated hitter Michael Massey stretches during a break in game two of the doubleheader against Maryland at Illinois Field on April 6. The Illini lost 8-4.

This weekend, the Illini started to get back in the win column.

In the series against Penn State Friday through Sunday, Illinois started to put the pieces together and look like the tournament-threat it could be by the end of the spring campaign.

It was an extra-inning effort, but thanks to some late heroics, the Illini overcame the Nittany Lions in game one 2-1.

It was a low-scoring affair, as Illinois pitching got back on track after criticism from head coach Dan Hartleb last week about its inability to find the zone and hold opponents at bay.

The combined effort came from senior duo Andy Fisher and Sean Leland. Fisher started the game, going five innings and allowing just one run, and giving up just three hits while striking out eight, which is second best behind his career-high of nine.

Leland was the star of the game, though. The fifth-year senior was brought in to relieve Fisher, and he provided five innings of one-hit balls, striking out seven. Fisher and Leland’s combined 15 strikeouts is the eighth time Illini pitchers have struck out 10 or more this season.

The hero of the Illinois offense was junior Michael Massey, who hit a triple in the 10th, which was followed by a sacrifice fly from redshirt freshman Kellen Sarver to walk it off for the Illini.

Game two of the series was a different story, though. It was a high-scoring affair, but the Illini were able to pull out victorious with a score of 7-6.

In this game, it was the starting pitcher who faltered. Junior starter Ty Weber — who had been the team’s ace thus far, with six runs being his high for the season — faltered early in the game, only making it into the fifth inning with one out.

But like game one, the team seemed to respond to Hartleb’s criticism from the previous week, as it went 4 2/3 innings, allowing just one baserunner the rest of the way.

Sophomore southpaw Josh Harris, who had been saddled with the loss in the last game against Bradley, secured the win in this game, pitching one inning and striking out 2 of the 3 batters he faced.

Offensively, nearly everyone on the team contributed, as 8 of the 9 starters reached bases in the game. Notably, senior Grant Van Scoy extended his on-base streak to a career-long 20 games, and Cam McDonald extended his to nine games.

After Harris, the trio of senior Quinn Snarskis, redshirt senior Quinten Sefcik and junior Garrett Acton finished out the game for the Illini, with Acton recording his Big Ten-leading 12th save.