Illini swept for the first time in 2019 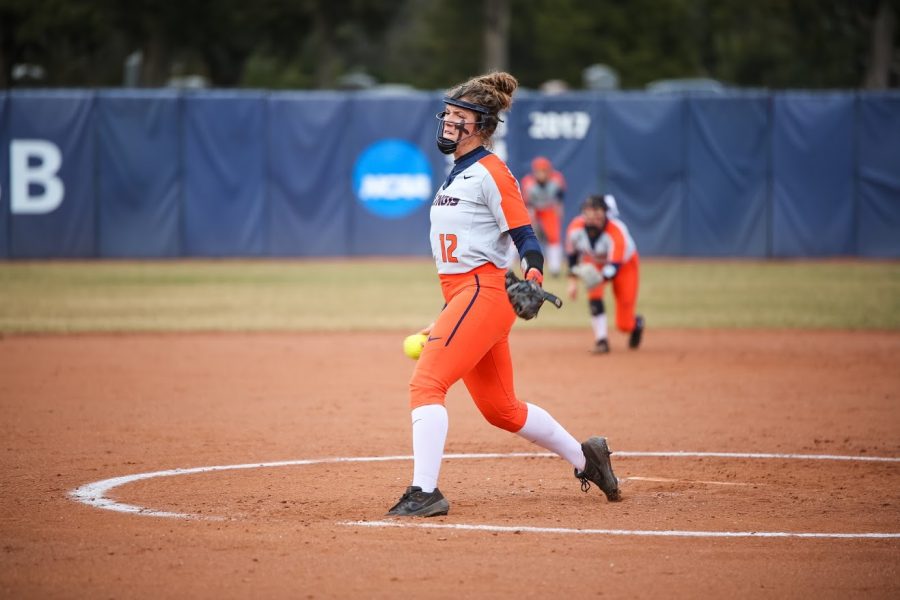 Taylor Edwards pitches at Eichelberger Field versus ISU on April 3.

After picking up a run-rule victory against Southern Illinois University, Edwardsville on Wednesday, the Illinois softball team prepared to host No. 22 Michigan in a three-game series. While the weekend was packed with promotions and alumni as the team celebrated the 20th anniversary of Illinois softball, the Illini were ultimately swept by the Wolverines.

The weekend results move the Illini’s overall record to 27-19 and 6-11 in the Big Ten. Illinois also falls to a 6-25 all-time record against the Wolverines.

“Michigan has been at it for a long time. They have a pretty strong winning tradition. We’re trying to build one,” said head coach Tyra Perry. “Obviously they have two great pitchers in the circle, and we had a struggle.”

Both Friday’s and Saturday’s game were close races decided by one run, with scores of 2-1 and 9-8, respectively. While Sunday’s game was just as close through the first couple of innings, the Wolverines eventually ran away with a 16-5 finish.

Illinois’ eight-run stint on Saturday ties the most runs scored on the Wolverines since North Carolina registered eight runs back on Feb 15. Michigan pitcher Meghan Beaubien (21-4) registered all three wins for the Wolverines and sits with a 1.85 ERA.

“We had (quality at-bats) this weekend,” Perry said. “We probably scored more runs on Michigan than most teams have. We just gave up as many as we were scoring. Our quality at-bats were intact. We did strike out quite a bit, but they have two great pitchers who strike people out.”

Friday’s contest was more of a pitching battle than an offensive competition. With a total of just nine hits between the teams, Beaubien and freshman Sydney Sickels both pitched the full seven innings.

Michigan opened the game with an RBI double and held Illinois scoreless through five innings.

Sophomore Katie Wingerter put the Illini on the board in the sixth inning, scoring off an RBI single from senior Kiana Sherlund. However, the Wolverines scored the go-ahead run in the top of the seventh on a sacrifice fly.

Saturday’s contest showed more action at the plate. Michigan struck first again with two RBI singles in the first inning to hold a 2-0 lead up until the third inning.

The Illini totaled five runs in the third inning, led by four RBI doubles. Illinois sent its entire lineup to the plate in the inning, beginning with a single from freshman Avrey Steiner and ending with a ground out from the second baseman. Sherlund, redshirt senior Carly Thomas, senior Veronica Ruelius and Wingerter accounted for the inning’s hits.

Illinois picked up another run in the fourth inning with an RBI single from sophomore Bella Loya to score redshirt senior Annie Fleming. The Illini grabbed another pair of runs in the sixth inning off an RBI single from freshman Kailee Powell and a passed ball.

While the Illini demonstrated more offensive power in the opening innings of Sunday’s matchup, the pitching staff struggled to hold the Wolverines.

Both teams opened up the game with high-powered first innings. The Wolverines scored five early runs off an RBI double and two home runs. Loya struck first for the Illini with an RBI single, scoring Fleming in the first inning. Ruelius added more damage with a three-run home run to bring the score to 5-4.

However, the Illini didn’t have much offensive success following the first inning, adding just one more run in the third inning with Thomas scoring on a passed ball.

Michigan kept digging Illinois a bigger hole, tallying a run in the third inning and three in the fourth to set up a seven-run seventh inning to secure the sweep.

“This weekend was a big challenge for us,” Edwards said. “Michigan is a good team, but a lot of situations that were set up in this game were good practice for what’s to come. A lot of those situations we wished we would’ve come out on top. (Saturday) we were one strike away, one pitch away, but again I think there will be another opportunity in the future, whether it be the Big Ten Tournament or the postseason, where we can look back to this series and remember what we could’ve done (different ly)and come out on top.”

Illinois quickly returns to action on Tuesday with a doubleheader at No. 21 Northwestern. Illinois will continue its road trip at Ohio State for a three-game series over the weekend. With just four more games following the series with the Buckeyes, the Illini are looking to keep fighting and playing their own game.

“We just need to show toughness and not worry about what happened this weekend,” Perry said. “We have one of the toughest schedules in the Big Ten, so it’s going to be a dog fight every single game we play. Even after Northwestern, we play Ohio State, who is also very high in the rankings, so we just have to play softball.”