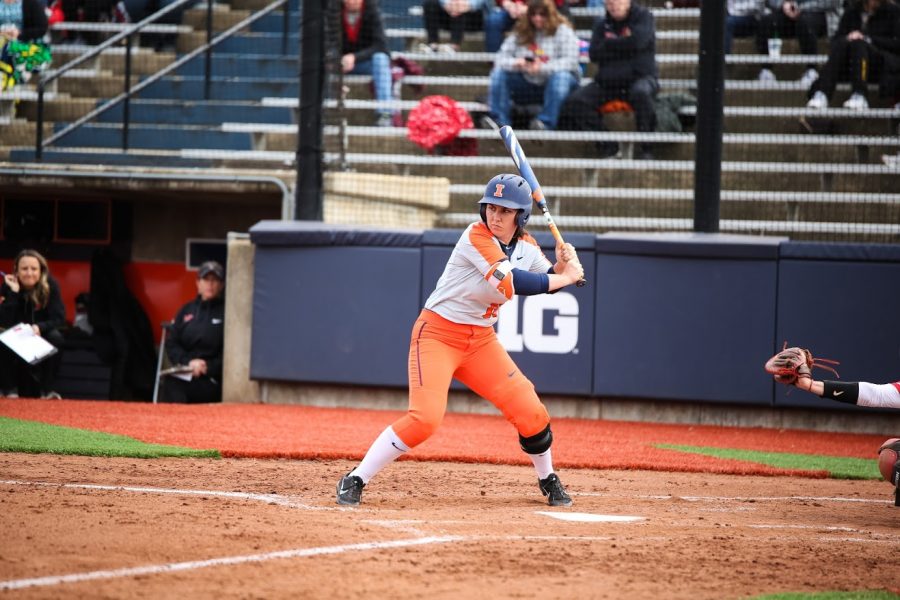 Veronica Ruelius getting ready to swing at Eichelberger Field on Apr. 3. The Illini defeated ISU, 2-1.

Illinois softball lost both games in its doubleheader to No. 21 Northwestern, 8-0 and 4-2. After looking to rebound off a tough weekend against Michigan, Illinois adds to its five-game losing streak.

During the first matchup of the day, the Illini were shut out following a frustrating offensive performance. The NCAA run rule was enforced after the Wildcats managed to score eight runs before the fifth inning. The Illini struck out nine times, compared with only one from a Northwestern batter. Freshman pitcher Danielle Williams notched her 24th win in 30 starts, while senior Illini pitcher Taylor Edwards gave up five runs in as many innings, alongside three hits.

The Wildcats offense flowed as they scored three runs in the opening inning, two of which were unearned due to an error. Two homers in the third and three more in the fourth inning helped extend the lead to eight before the Illini could blink.

The Illini weren’t far behind the Wildcats in hits, but the team couldn’t capitalize with runners on base. They had a chance to cut the Wildcat lead to one at the top of the third when senior Annie Fleming hit a single to right field, followed up by a double by senior Kiana Sherlund. With two outs and two runners in scoring position, senior Carly Thomas struck out at the plate, ending the Illini’s hopes of putting points on the board.

After that sequence, six Illini batters failed to get on base, ending the game.

While the Illini were able to get on the board and tighten up their defense in the second game, it wasn’t enough to knock off their in-state rival. The Illini started out at the plate to kick the game off, but they failed to draw first blood as three batters turned into three outs.

Freshman pitcher Sydney Sickels and the Illini defense showcased their grit by holding strong during Northwestern’s initial outing at the plate. After two quick outs, the Wildcats got two runners on base and were poised to end the second outing like the first. But head coach Tyra Perry’s trust in her team’s resilience was proven as Illinois stopped Northwestern from scoring.

Both teams were held scoreless for the first two innings of the game, but when the third inning rolled around, the flood gates broke open. The Wildcat’s first three batters of the inning successfully made it on base, which set up freshman Jordyn Rudd to convert on the grand slam.

The Illini joined the scoring party when Veronica Ruelius homered to right field, scoring herself and Bella Loya. The game became a defensive matchup afterward as both teams failed to score a single run for the remainder of the game.

The Illini had an opportunity to tie the game on their last offensive possession. With two runners in scoring position and a full count, it was on Annie Fleming to bring the runners home but struck out instead.

The Illini have had a tough last five games, and this marks the first time this season they’ve had more than a two-game losing streak. But Perry firmly believes in the team’s ability to bounce back from adversity, and she said she’ll be putting it to the test in these next few games.

“We have had a tough stretch of games against the top teams in the conference and it has been challenging,” Perry said, according to fightingillini.com. “We are learning about ourselves as players and as coaches. We will learn from our losses and come back stronger against Ohio State.”

Next up for the Illini is a trip to Columbus, Ohio, where they will face the Buckeyes in yet another Big Ten matchup. The first game will be Friday at 5 p.m. CDT.