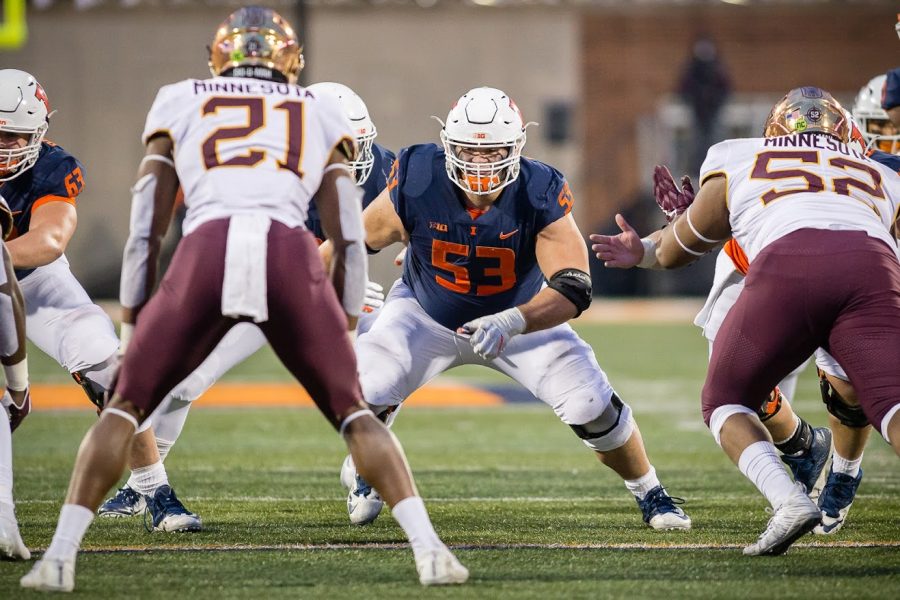 Former Illinois offensive lineman Nick Allegretti gets ready to make a block during the game against Minnesota at Memorial Stadium on Nov. 3, 2018. Allegretti is the most recent draft pick out of Illinois, though a few former players are expecting to hear their names called at the 2021 NFL Draft this weekend.

Former Illinois offensive guard Nick Allegretti became just the second Illini player drafted in the last three years on Saturday when the Kansas City Chiefs selected him with the 216th pick in seventh round of the NFL Draft.

Allegretti captained Illinois in each of the past two seasons and anchored the offensive line, starting 36-straight games while hardly missing a snap during head coach Lovie Smith’s first three seasons at Illinois.

Although the Illini didn’t have much success during Allegretti’s time with the team, the Frankfort, Illinois, native was rated as the third-best offensive guard in the country in 2018 by Pro Football Focus.

He gave up just one quarterback hit and didn’t allow any sacks on Illinois quarterbacks AJ Bush and M.J. Rivers, while the Illini offensive line helped Reggie Corbin power the No. 12 rushing offense in the country.

Pro Football Focus also rates Allegretti as the No. 6 guard in run-blocking and the No. 11 guard in pass protection.

The Chiefs, who made the AFC Championship game in 2019, are no strangers to Illinois offensive line products. Kansas City selected Allen in the second round of the NFL Draft in 2012, and since then, he has made 66 NFL starts in 80 appearances for the Chiefs and Houston Texans.

Allegretti is the second player to have played under Lovie Smith at Illinois to be taken in the NFL Draft. Defensive end Dawuane Smoot was taken in the third round by the Jacksonville Jaguars in 2017.

News of his selection was met with pride from Smith and Illinois athletic director Josh Whitman, who each shared their congratulations through Twitter on Saturday.

Smith tweeted, “Congrats @Chiefs on gaining an incredible player and an even better man. You’re very lucky to have him. Proud of you @Gretti_53! #ILL.”

Whitman shared his thoughts about 40 minutes later, tweeting a picture of him and Allegretti hugging each other.

“Congrats to our guy @Gretti_53! @Illinois_Alma graduate, Big Ten Medal of Honor recipient, and now NFL draft pick. Keep climbing, my friend. You’ve got a big, loyal (Illinois) family behind you every step of the way! #ILLINI.”

During his time at Illinois, Allegretti was a prominent figure in community service.

As president of Uplifting Athletes at Illinois, Allegretti helped raise over $88,000 in funding for rare disease research and treatment in the program’s yearly Lift for Life event.

After graduating from Illinois with a bachelor’s degree in Business in December 2017, he is set to obtain his master’s degree in AHS at graduation the weekend of May 11-12.