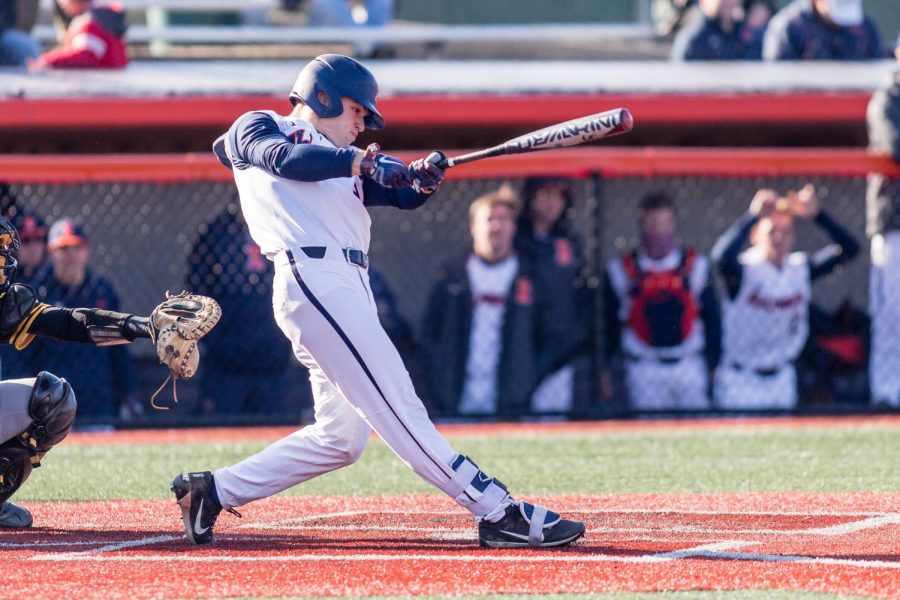 Senior outfielder Jack Yalowitz swings at a pitch during Illinois’ game against Milwaukee at Illinois Field on Wednesday March 14, 2018.

There may not be a more critical factor to a baseball player’s success than his equipment. Having the optimal weight and length bat, a glove that breaks in perfectly to fit the hand and a comfortable uniform are paramount for feeling good and playing well.

Unfortunately for Illini senior outfielder Jack Yalowitz, none of those things were afforded to him for the first two games of Illinois’ series at Nebraska. Upon touching down in Lincoln, Nebraska, each Illini player retrieved his equipment bag from the airport, but Yalowitz’s never appeared.

“We were all sitting there at baggage claim waiting,” Yalowitz said. “We were the last flight to land in that airport, and someone from baggage claim came out and said, ‘That’s all the bags that are coming out,’ and it was really frustrating. We all have the same bag and mine didn’t make it.”

It was later revealed United Airlines misplaced and lost Yalowitz’s bag despite it being the exact same style and color as each of his teammates’ bags.

Yalowitz said he was frustrated by the incident. In a game where the smallest margins separate failure from success, having equipment that gives a player the most comfort possible is critical.

“Honestly at first, I thought it was just a joke. Sometimes we play pranks on each other like take each other’s bags,” Yalowitz said. “It got to the point where we’re all just standing there, and no one knows where my bag is. (Only) one of 35 bags that (was) missing, so it turned out to be pretty frustrating.”

Although missing his bat, glove and uniform, Yalowitz’s presence in the lineup was still essential. In the midst of a resurgent season, the senior has carried the Illini offense through multiple stretches this year.

When Illinois released its lineup for Friday’s game, Yalowitz’s name remained in the sixth spot where it normally is, but there was a number 22 listed for his jersey rather than the usual number three. Yalowitz was forced to borrow junior teammate Cyrillo Watson’s uniform, but the new number didn’t seem to affect him at the plate.

Using junior Michael Massey’s bat and holding up his pants with assistant coach Adam Christ’s belt, Yalowitz went 2-4 with a double and a single in Illinois’ 8-1 Friday victory.

“Everybody had stuff that I fit into fine. That wasn’t an issue,” Yalowitz said. “Once the game started, I didn’t even think about it.”

Still without his equipment at the start of Saturday’s game, Yalowitz continued to rake in the number 22 shirt, going 1-3 in Illinois’ close 4-3 loss.

When the bag was finally returned to the Illini clubhouse, it was greeted with applause from players and coaches. Yalowitz even let out a rejoicing fist pump upon finally seeing his bag again.

Although Yalowitz’s things were finally returned to him, he may have opted not to use them right away and for good reason. Baseball is traditionally regarded as an extremely superstitious sport, and many great players have admitted they keep doing the same small things in their daily routines or use the same equipment if they’ve continued success over a series of games.

After collecting three hits with other players’ gear, Yalowitz could have tried to continue using their things until his bat cooled down, but the senior is simply happy to have his equipment back.

“I’m not really superstitious, and most of the guys on the team swing the same model bat and mine’s the same as the one I was swinging for the last two days, so I’m not really worried about it,” Yalowitz said. “I don’t think about that stuff very much.”