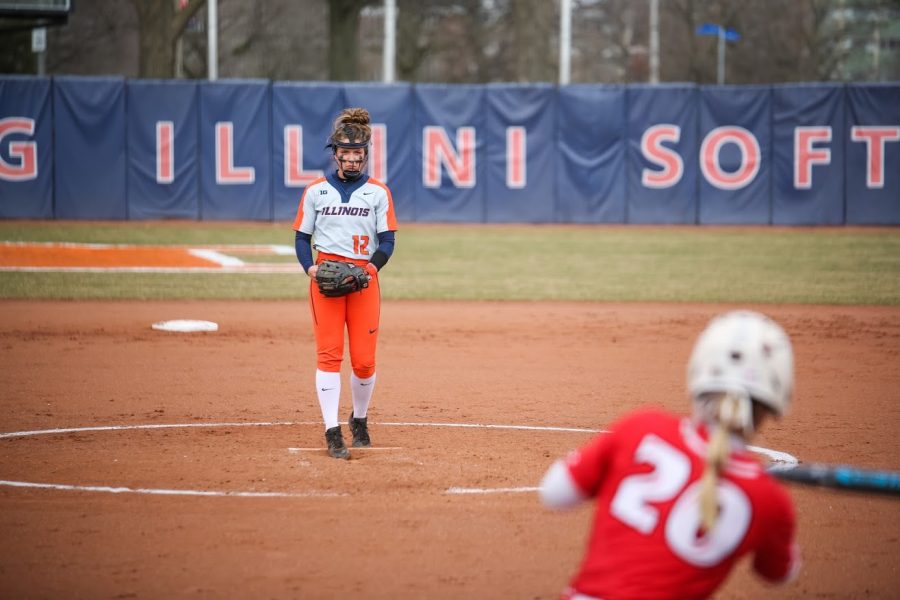 Taylor Edwards pitches at Eichelberger Field versus ISU on April 3.

With just three regular season games left, the Illinois softball team is looking to earn its third Big Ten series win this weekend. The Purdue Boilermakers will travel to Champaign this weekend for a three-game series, which will also mark their last regular-season series.

Illinois will come into the series off a mid-week 7-0 win against non conference opponent DePaul, which snapped its previous seven-game losing streak. With a recent stretch against nationally-ranked teams, the Illini have shown signs of struggle against Big Ten competition.

Illinois was most recently swept at Ohio State last weekend, and got swept at home the weekend before by No. 22 Michigan. Between the Ohio State and Michigan series’ the Illini also dropped two games against No. 19 Northwestern in a double header.

While the Illini have dropped to a 28-22 record with recent losses, Tuesday’s rain-shortened game showed some positives for the Illini as they head into their weekend series.

The seven-run victory was led by three home runs and a shutout performance from senior pitcher Taylor Edwards, who allowed just two hits and struck out five batters.

Redshirt senior Annie Fleming got the ball rolling quickly with a solo homer in the first inning. The Illini extended their one-run lead in the fourth inning with a six-run showing.

Freshman Kailee Powell gave the Illini an early base runner after reaching on a fielding error. Sophomore Katie Wingerter doubled to right center before sophomore Shelby Stauffenberg recorded her career-first home run with a three-run shot.

Fleming kept the action going with a double and quickly scored after redshirt senior Carly Thomas hit her eighth home run of the season. Senior Stephanie Abello contributes the last run, hitting her first triple of the season to score sophomore Bella Loya.

Illinois needs to bring the same offensive strength into the weekend series, as the Boilermakers will be looking to attack the Illini and earn a spot back in the win column.

Purdue will come to Eichelberger Field on a six-game losing streak, most recently being swept by Wisconsin and Northwestern. Both Illinois and Purdue have a 6-14 Big Ten record and are tied with Penn State for ninth in the conference standings.

The Illini will be looking to grab a couple last-chance wins this weekend while also celebrating their class of 2019 as nine seniors will play on Eichelberger Field for the final time.