Illinois eliminated from Big Ten Tournament in loss to Michigan 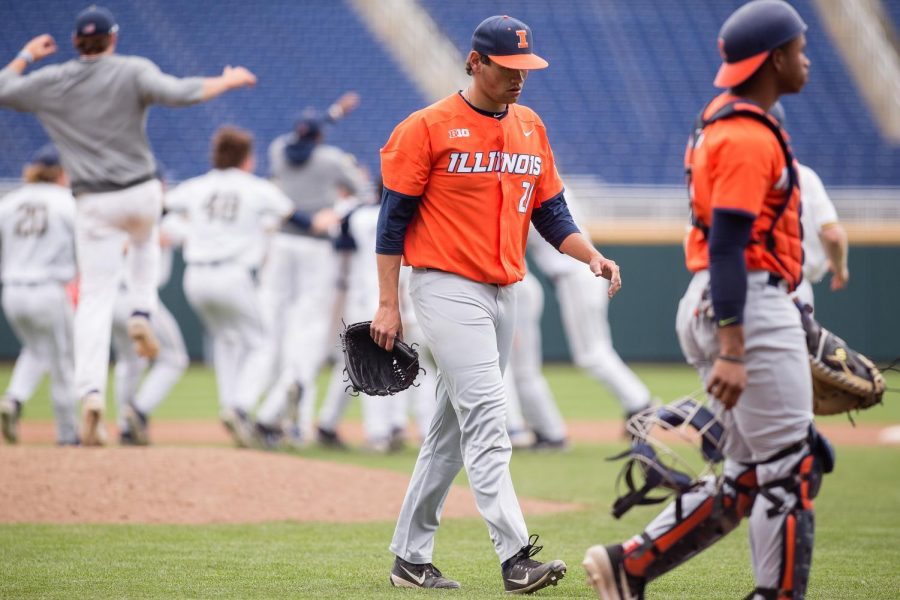 Illinois closing pitcher Garrett Acton (26) walks off the field after giving up a walk-off two-run double the game against Michigan in the Big Ten Tournament at TD Ameritrade Park on Thursday, May 23, 2019. The Illini lost 5-4. Photo by Austin Yattoni of The Daily Illini.

After a heartbreaking loss in the Big Ten tournament opener against Maryland, the Illinois baseball team was handed another bitter loss, this time at the hands of the Michigan Wolverines by a score of 5-4.

It’s the second time in as many days the Illini have let a tight game get away from them in crunch time. Heading into the bottom of the ninth, Illinois had a 4-3 lead with Garrett Acton — the nation’s leader in saves — stepping onto the mound.

The inning started out simple enough with an infield pop-fly and a base hit by Michigan’s Miles Lewis. Acton then tried to pickoff Lewis at first but missed the mark, allowing Lewis to advance into scoring position. To make matters worse, with two outs, Acton walked Wolverine senior Ako Thomas on a full count, putting Michigan in position to steal the game. Soon after, Michigan’s Jordan Nwogu delivered the knockout blow as he hit a walk-off double that brought the two winning runs home.

“(This was) obviously a tough loss for us,” said head coach Dan Hartleb via fightingillini.com. “(It) takes us out of the tournament, and you always want to play for a championship. We had a lot of guys do things well today. I thought we played to win, but ultimately we just made too many mistakes.”

Thursday’s loss might be even tougher to get over as they held a 3-0 lead in the seventh inning and looked to continue the shutout into the eighth inning, until an Illinois double play which would’ve ended the inning was reversed, resulting in a Michigan score.

Illinois continued to swing at Michigan in the ninth, adding one more run to their total but failed to bring three runners which would’ve given the team a comfortable lead.

Despite the loss, the Illini offense seemed miles better than they did in their tournament opener, with three players notching at least two hits: Kellen Sarver with two, Cam McDonald with two and Grant Van Scoy with three.

Acton (2-3) was charged with the loss while Jack Weisenburger (2-0) was given the win, marking the first time Illinois has lost back-to-back losses since April 15-16.

Now that the team’s Big Ten Tournament hopes are dashed, the Illini have the NCAA Tournament in their sights.

“In the NCAA Tournament, we’re going to play good teams like we played today,” said Van Scoy via fightingillini.com. “If we keep fighting and battling, I think we are going to come out on the other side.”

With the NCAA Selection Show set for Monday, the Illini feel good about their chances on making the tournament for the first time since 2015 even after their early exit in the Big Ten Tournament.

The Illini have accomplished plenty this season for there to be much doubt about being selected. They’re ranked 29th in the RPI — the best in the Big Ten — and had six straight Big Ten series wins to end the regular season (at Minnesota, Penn State, at Nebraska, Indiana, Purdue, at Michigan State), in addition to being ranked first and second in the Big Ten in fielding percentage and batting average during the regular season, respectively.