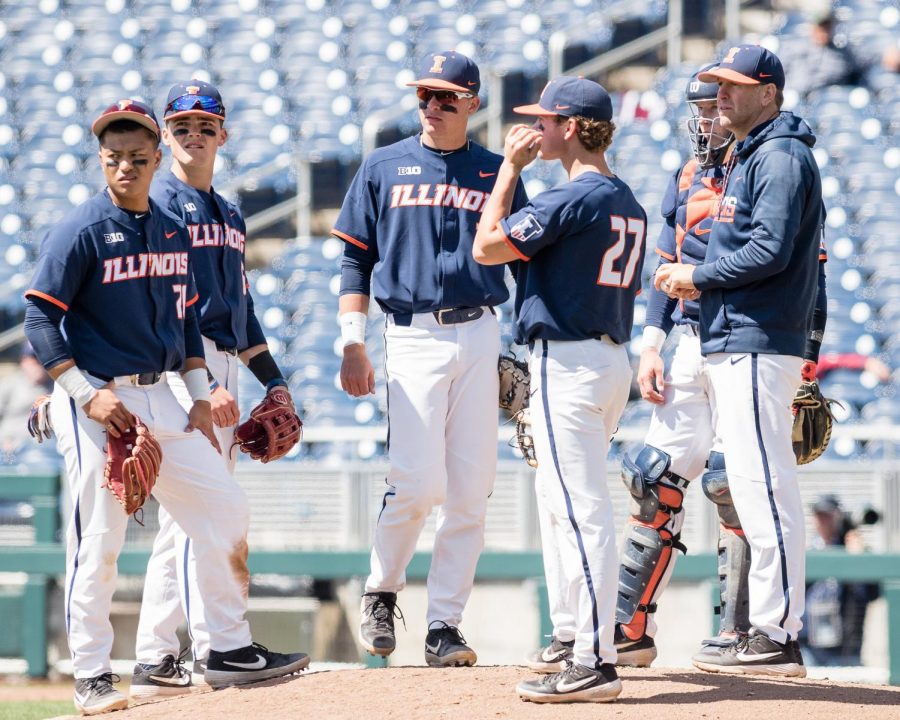 Members of the Illinois infield look to the bullpen for the next pitcher during the game against Maryland in the Big Ten Tournament at TD Ameritrade Park on Wednesday, May 22, 2019. The Illini lost 6-2. Austin Yattoni of The Daily Illini.

The 20th-ranked Illinois baseball team suffered a 6-2 loss to the Maryland Terrapins in their Big Ten tournament opener on Wednesday.

The Illini got the short end of the stick in a game that had a tight score all game long. In the top of the eighth inning, the Terrapins freshman infielder/outfielder Maxwell Costes and sophomore catcher Justin Vought both scored on two-run homers off of Illinois’ redshirt senior Sean Leland as Maryland closed the half-inning out with a game-high four hits and four runs.

With a 5-1 lead heading into the ninth, Maryland’s senior Taylor Wright scored from third off of a bunt by sophomore outfielder Chris Alleyne to make it a 6-1 Maryland lead.

Down five in the bottom of the ninth, and having only four hits up until that point, the Illini could only hope their bats would light up soon. A spark was lit when senior outfielder Jack Yalowitz picked up a base hit, but just like several other offensive possessions during the game, it was their only hit of the inning.

“We got outplayed in every aspect,” said head coach Dan Hartleb via fightingillini.com. “Their starting pitcher did an outstanding job against us. We gave up the big inning, and you just can’t do that in tournament play.”

While the offense struggled, the Illini defense stood rigid for most of the game. Pitcher Andy Fisher nabbed his fifth straight quality start and 12th straight start allowing three or fewer runs. On top of that, the team accomplished an error-free game for the 14th time in the last 20 games.

It wasn’t a surprise Illinois continued to play top-notch defense Wednesday as they’re tied for first in fielding percentage with .983, breaking the team record set by last year’s mark of .979.

After the loss, the Illini’s backs are against the wall, as they must win four games in three days to qualify for Sunday’s championship.

The first matchup on the road to redemption will be against the Michigan Wolverines at 9 a.m. Central Standard Time.