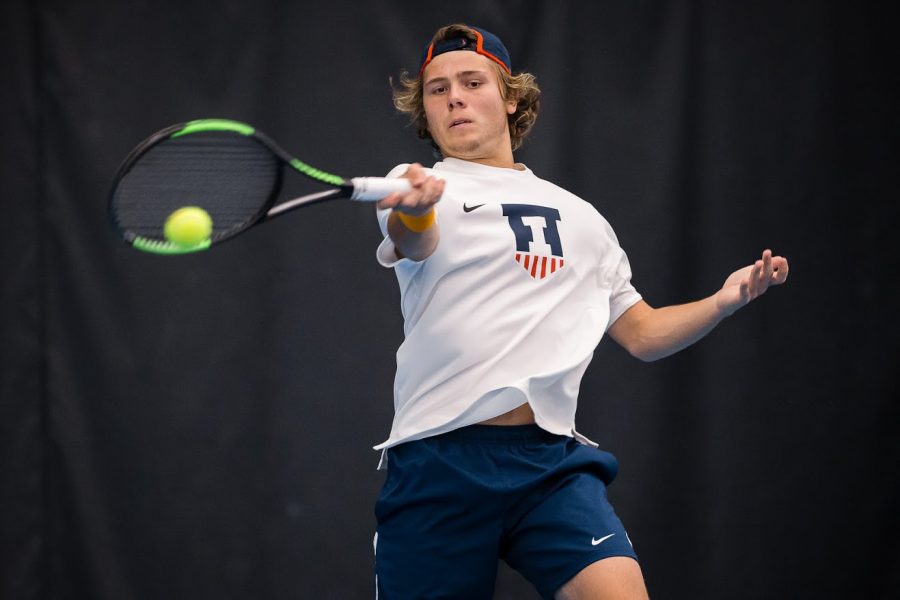 Kovacevic became an All-American Tuesday as he advanced to the Sweet 16. He defeated Guanarteme Nuez of the University of Texas-Arlington Monday and Tulane’s Ewan Moore Tuesday.

Kovacevic was scheduled to take on Bar Botzer of Wake Forest Wednesday, who ended up withdrawing from the tournament with a foot injury, so Kovacevic advanced to Thursday’s quarterfinal round.

Kovacevic defeated Sam Riffice of Florida Thursday, 6-7, 7-6, 6-3. According to Illinois men’s tennis Twitter, it’s the deepest run by an Illini men’s player since Kevin Anderson in 2007.

Kovacevic, whose Florida home is about 15 minutes from Anderson’s, said he has Anderson’s phone number, and he thought it was “cool” his tournament run emulated Anderson’s.

Though his junior season for the Illini is in the books, Kovacevic said he’s planning to play in tennis tournaments over the summer. He also said he felt he improved in all aspects of his game this season.

Brown and Kovacevic were the only Illini who competed in the singles or doubles tournament this year.

In the team tournament, Illinois was eliminated in the second round, losing 4-1 to California. Wake Forest advanced to the championship, losing 4-1 to Texas, whose coach was arrested in the fallout of the college admissions scandal that broke in March.

Illinois had a strong spring season, defeating then-No. 7 University of California, Los Angeles in February but lost twice to then-No. 2 and then-No. 1 Ohio State in the spring.

Kovacevic has had a stronger spring and picked up several accolades this season, including being an All-American.

Looking back on the season, head coach Brad Dancer thought the match at then-No. 11 Notre Dame was among his favorite memories. Illinois won the match, 4-3.

“When we went into Notre Dame and we won a really tough match at Notre Dame, and (Kovacevic) was the last match on,” Dancer said. “We had a lot of great matches, and to be honest, one of the most enjoyable matches this year was a match we lost against the national champion Texas team.”

Illinois women’s tennis also had strong spring campaign, with notable wins including the team defeating No. 11 Ohio State in April.

Head coach Evan Clark said defeating Ohio State was his favorite memory of the season, as Illinois hadn’t defeated the Buckeyes in five years, defeating them, 4-3, in 2014.

The Big Ten tournament was a strong one for the Illini, who defeated No. 2-seed Wisconsin in the semifinals, 4-0, to advance to the finals. Illinois lost to No. 1 seed Michigan, 4-1. The team lost to then-No. 17 Michigan, 4-3, in April when the Wolverines came to the Atkins Tennis Center.

For the Illini, the postseason didn’t extend much further than Lincoln. In the team NCAA tournament, Illinois lost 4-0 to Arizona State in the first round at Durham, North Carolina, ending the team’s season.

Despite the very brief NCAA tournament run, Clark thought the team played a difficult spring schedule, which prepared them for the Big Ten and NCAA tournaments. As the team gained experience over the course of the season, Clark expects them to be stronger in the fall.

In the singles and doubles tournament, the Illini had sophomore Asuka Kawai, who was the lone competitor. Kawai’s run was the furthest an Illini had advanced in the NCAA singles tournament, and Clark was very elated to have a player advance so far into the tournament.

“One of my favorite memories of coaching, just because of what she did over the four days,” Clark said. “It was fantastic. It’s never happened in program history. We haven’t even been close to having someone in the final eight in the NCAA tournament, which is the best players in the country, and so it was a delight.”

The singles tournament went a bit smoother for the Illini. Kawai advanced to the quarterfinals in the individual tournament. She defeated Maria Mateas of Duke in the first round, and Michigan’s Brienne Minor on Tuesday in the second round. She defeated No. 7 seed Alexa Graham of North Carolina on Wednesday.

Kawai came to the United States from Japan when she was 15 years old, and her story was recently profiled on Illini Tennis twitter.

This season, Kawai has also gained experience playing Graham and Somarriba, matchups that may seem daunting to some, but Kawai embraced the chance to play some of the very best individuals in the NCAA.

“Just knowing that I’m playing the No. 1 seed was definitely something that excited me more than what made me nervous, so I was pumped that I get another opportunity to play a quality player,” Kawai said.

Kawai also enjoyed the Orlando weather, which sharply contrasted with the Illinois weather during the tournament. Despite being excited to play strong competition, Kawai found the quarterfinal match to be quite grueling.

“It was hard,” Kawai said. “I was up by a break for both sets at one point, and I was excited about it, but the other girl was definitely much tougher than I thought that she did a really good job coming back and being tough at the moment.”

The Illini have enjoyed successes as of late, though weathered many close matches, like the 3-4 loss to Michigan. Kawai picked up several accolades, including All-American. Clark also was named ITA Midwest Regional Coach of the Year.

“We’ve been consistent, making the NCAA tournament twice,” Clark said. “Obviously we want more, and we want to be up at the top of the Big Ten and making a push for Sweet 16 next year as a team and stuff like that.”