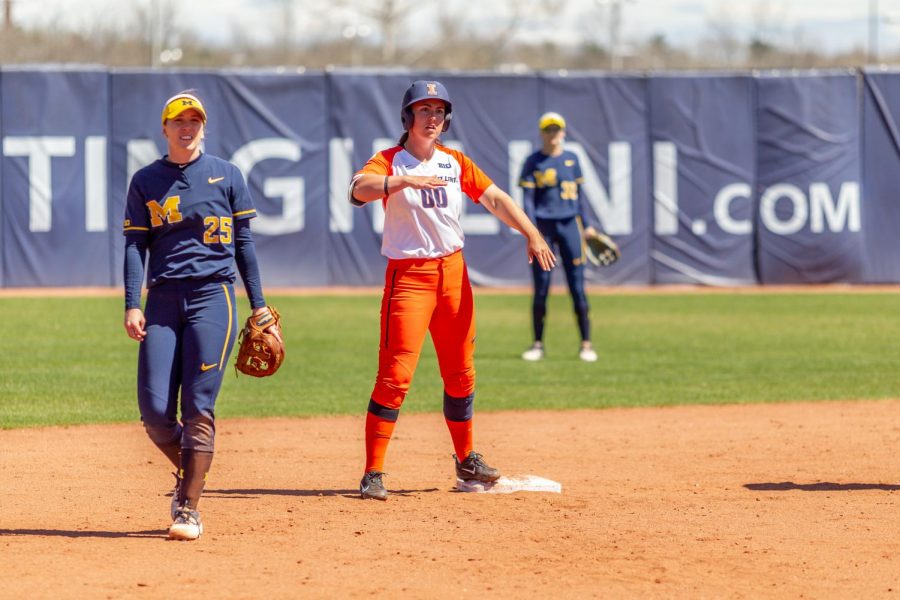 Veronica Ruelius stands at second base during a game against Michigan at Eichelberger Field on April 20. The Illini lost 8-9.

Following its second loss to No. 22 Virginia Tech Hokies in the NCAA tournament, the Illinois softball team finished its 20th season with a 33-25 record including a 9-14 conference record.

Illinois was selected for the Lexington Regional, hosted by No. 14 Kentucky. After dropping their first game to the Virginia Tech 6-2, the Illini beat the Toledo Rockets 2-0 before being eliminated by Hokies in a 5-1 loss.

Senior Kiana Sherlund created the Illini’s most memorable moment in the 2019 NCAA tournament with a walk-off two-run homer against the Rockets. Freshman pitcher Sydney Sickels battled with Toledo as well, throwing a shutout and allowing just three hits.

Before their stint in the NCAA tournament, the Illini competed in the Big Ten tournament as the No. 9 seed.

Illinois faced off against No. 8 Nebraska in the first round, earning a 6-4 victory with a three-run seventh inning. Sickels earned the win against Nebraska pitching 6 1/3 innings and allowing three earned runs on seven hits while striking out six.

Illinois went on to face No. 1 Michigan but fell 1-0 in extra innings. Senior Taylor Edwards pitched a scoreless seven innings against the Wolverines before allowing a walk-off solo home run in the eighth inning. Edwards gave up just seven hits in the complete-game effort.

Illinois has also made the NCAA tournament three times in the last four seasons, just missing the field in the 2018 season.

“(Head coach Tyra Perry) has been awesome and the whole coaching staff has been amazing,” said senior Annie Fleming per fightingillini.com. “The competitiveness that they bring and the expertise, the trust I have in them is something I can’t explain. This is just going to keep growing and growing, and I cannot wait to come back and watch this team in the next few years.”

With the end of the 2019 season comes the loss of nine seniors. The Illini will head into the offseason without three of their best hitters and defensemen which includes Fleming, Kiana Sherlund and Carly Thomas.

Sherlund led the Illini this season with a .367 batting average, 72 hits and four triples. Sherlund was also selected for the Big Ten All-First Team for the second season in a row.

Fleming and Thomas also fueled the Illini at the plate, hitting .361 and .351, respectively. Fleming registered 69 hits and earned an on-base percentage of .438.

Thomas had a record-setting final season as an Illini, becoming the career doubles leader for the Illinois program with 68. Thomas also led the NCAA this season with 24 doubles.

Starting every game this season in left field, Thomas committed just one error, earning herself a spot on the Big Ten All-Defensive Team for the third time in her career. Thomas was also selected to the Big Ten All-Second Team.

“We had a great senior class who has shown a lot of leadership throughout our entire season,” Perry said via fightingillini.com. “In situations like this, all you can ask for are opportunities, and we had those. So we talked a lot to our returners about taking the cues that our nine seniors have left us with and expounding on those to make us better and stronger for next season.”

While the Illini will miss the talents of the nine seniors, several underclassmen showed potential this season.

After having a breakout freshman season, sophomore Bella Loya continued to be a leader for the Illini offense. Loya finished the season batting .366 and led the Illini with 12 home runs and 48 RBIs. Loya was also selected to the Big Ten All-First Team alongside Sherlund.

Sickels and freshman infielders Avrey Steiner and Kailee Powell also left their mark on the 2019 season.

Sickels was the ace for the Illini this year with a 19-13 record and a 3.41 ERA. Sickels also broke the program record for the most saves in a single season with five. The Indianola, Iowa, native started 28 games while appearing in 44, pitching a total of 172.1 innings.

While Sickels dominated in the circle, Steiner and Powell were usually right behind her, each appearing in at least 51 games. While Steiner solidified her position at second base early in the season, Powell jumped around before settling in at first base.

Powell showed her strength at the plate this season, hitting six doubles and three home runs on 29 hits. The freshman had 24 RBIs and 13 runs. Steiner worked in the nine-spot most of the season and hit .276 on 27 hits and added 15 runs.

Although the team is losing nine players, the Illini will add seven freshmen this fall, ranking as the No. 35 recruiting class according to Extra Inning Softball. Several of the incoming Illini are utility players and may have an immediate impact for 2020 season.