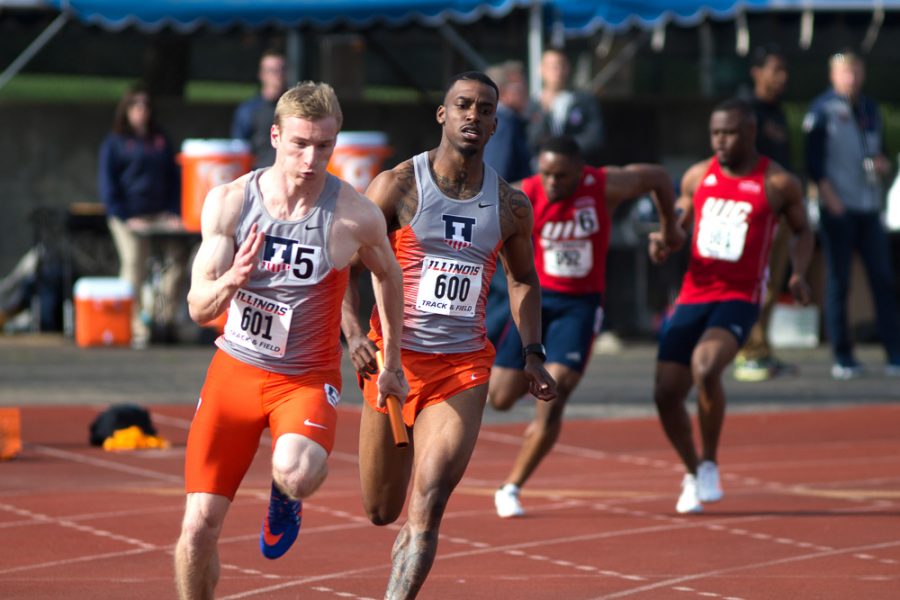 Mo Maat sprints up behind Devin Quinn to hand off the baton for the last dash in the 4x100 Meter Relay at Illinois Twilight at the Illinois Track Field on April 22. Quinn completed his senior campaign after multiple successes, taking away records like the fastest men's 100-meter in the Big Ten conference and Illinois history.

The Illinois men’s and women’s outdoor track and field teams wrapped up their spring campaign this week in Austin, Texas.

Senior sprinter Devin Quinn finished seventh in the 100-meter dash Friday at the NCAA Championships, completing his final collegiate race with a time of 10.12 seconds. Texas Tech’s Divine Oduduru won the race, and the national title, with a time of 9.86 seconds.

“My warm up was smooth. Everything was working properly,” Quinn said. “After the (starting) gun went off, my hamstring just tightened up a little bit, and I had to pull up just a little bit through my acceleration, which overall kind of weakened my race, which kind of sucked but at the end of the day, still taking seventh place at the NCAA Finals probably being one of the fastest NCAA Finals in the history of the NCAA, I am very pleased and very honored to be in a heat like that.”

Quinn also competed in the 200-meter dash Wednesday, finishing with a time of 20.31, but he didn’t advance to Friday’s final. However, his performance was the second-best time in the Big Ten this season.

The Illini also had a near-miss in the 4×100-meter relay made up of sophomore Jason Shannon, freshman Declan Rustay, senior Joe Haight and Quinn. After finishing with a time of 39.01 seconds, the Illini missed the qualifying cut and didn’t move on to Friday’s races. The last qualifying spot was 39 seconds flat.

Although a handful of athletes concluded their season with NCAA berths, the Illini a slew of highlights off the track as well.

This April, Illinois had its final home meet at the Soccer and Track Stadium. The Illini will compete at Demirjian Park, a new soccer and track facility currently under construction; however, the men and women won’t be able to host any track meets until the completion of the track spaces  in 2021.

Despite the changes happening off the track, Illinois highlighted its spring campaign both men’s and women’s relays.  The 4×100-meter relays would often be among the strongest performances for either team, including the Illini men third place finish out of seventeen teams and the women’s second place conclusion of eighteen teams at the Drake Relays.

At Drake, scoring is based on relay performance alone, which differs from other meets where all team entries are scored.

Since Illinois has a long-standing history of success at the Drake Relays, head coach Michael Turk was inducted into the event’s Hall of Fame this spring, although the celebration was a quiet affair.

The team also competed across the nation this spring, including a trip to Auburn, Alabama, between meets in Illinois and Iowa. The team also traveled to Mississippi, California and Texas over the course of its spring campaign.

For many Illini, it was the Big Ten Championship meet that marked the end of their seasons. But for Quinn, college racing ended at the NCAA Finals. Although he didn’t leave Austin, Texas, a national champion, his senior campaign was sprinkled with individual accolades.

After his last home meet at Illinois in April, Quinn said he would like to come back and run unattached at future meets.

Although he’s no longer running for Illinois, Quinn is staying in Champaign to finish his degree and complete an internship this fall while taking steps towards becoming a professional runner. He’ll also be training for the 2020 Olympic Trials in the coming months.

Quinn has a plethora of good memories from his time at Illinois as well. He said one of his favorite memories was during his freshman season at the Big Ten Indoor meet where he placed within the top-five in two events: a meet he said was instrumental in his career going forward.

“I placed, I think, fourth in the 60-(meter dash) and fifth in the 200-(meter dash), if I’m not mistaken,” Quinn said. “It was just one of the greatest experiences of my track career.”

“Watching Devin over his career and knowing the work that he’s put in, and watching him develop as a competitor over the years, I felt quite a bit of confidence about him making the final,” Turk said. “I felt like he was very well-prepared and ready to go.”

Although the men’s and women’s rosters were heavy with underclassmen, the teams showcased their abilities to function as a unit.

Turk said one of his favorite moments was when the team worked together at Texas A&M.

“One of my favorite moments of the year was down at Texas A&M,” Turk said. “When we had been through a long rain delay and it was late in the evening, and we were getting ready to run the 5K, and our team, both men and women really kind of rallied together, and went out, and all sat together and were putting a lot of effort into cheering for Dan Lathrop, and they were chanting his name. That was the first time, I think I saw kind of all the groups, the men and women all really kind of charging on the same page together. Without anybody organizing them, they just kind of did it on their own, and that might be my favorite moment of the year.”