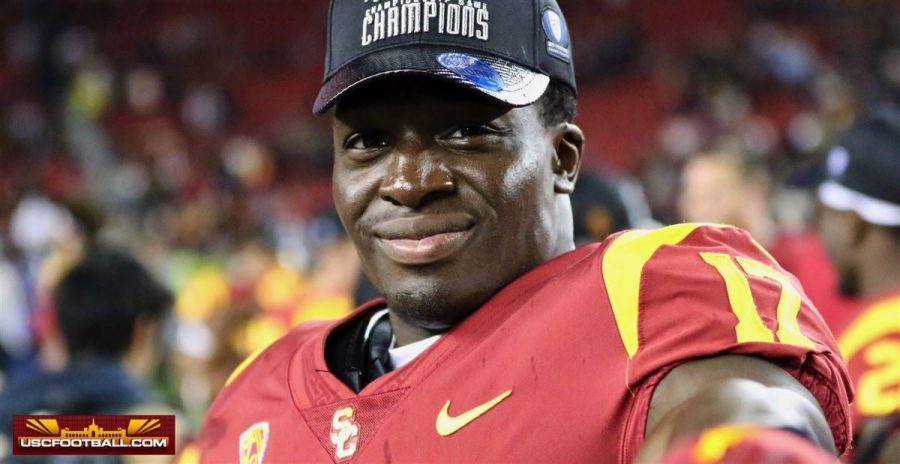 The Illinois football team continued to add pieces to its roster as they added Josh Imatorbhebhe, a grad transfer wide receiver from the University of Southern California and Michigan transfer quarterback Brandon Peters within the past few days.

Imatorbhebhe, a 6-foot-2-inch, 215-pound receiver, committed on Monday allowing the Illini to let out a sigh of relief after three recent transfer commits either stayed at their original schools or de-committed and joined another program.

Like his former USC teammate and now current Illinois teammate, Oluwole Betiku Jr., Imatorbhebhe’s collegiate career has been marred by injury thus far, as he’s only racked up two catches for 11 yards in the past three years.

Betiku Jr. and Imatorbhebhe were roommates at USC during their freshman year according to the Illini Inquirer, which played a role in him committing to the blue and orange.

Fortunately for the former top-200 recruit, he’ll have the opportunity to make an instant impact on the field this fall with two years of eligibility left and a wide receiver room in dire need of more playmakers.

For Imatorbhebhe, having two former USC coaches in Keynodo Hudson and Austin Clark at Illinois, made him feel more at home and comfortable in Champaign, according to an interview with the Illini Inquirer.

On the other side of the ball, Illinois added former Michigan quarterback Brandon Peters to the program as he announced on Tuesday via Instagram that he had committed to the Illini.

The former No. 61 overall prospect gets a clean slate and will most likely be the number one contender for the starting spot alongside incoming four-star athlete Isaiah Williams, after former starter MJ Rivers II entered the transfer portal this spring.

In his two seasons in Michigan, the 6-foot-5-inch, 230-pound pocket passer completed 58 of 110 passes for 680 yards, four touchdowns and three interceptions.

Lovie Smith and his staff have stepped up in terms of collecting talent for the team as Peters’ commitment bring the total number of four-star or five-star recruits to 15 since 2018. In the past seven years prior to that, there were only four.

On paper, the Illini have some serious toys to tinker with this fall, but everyone knows football isn’t played on paper.