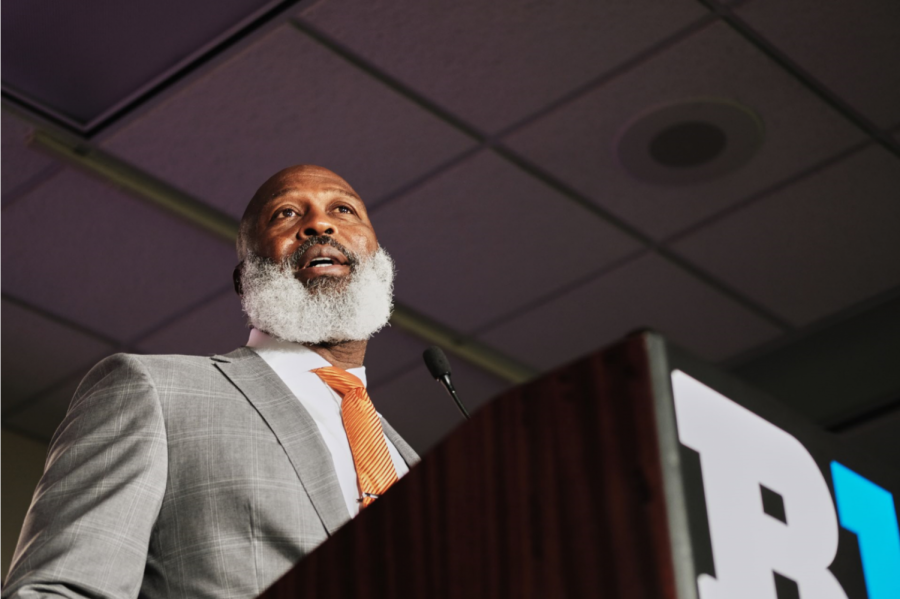 Although some Illini fans are losing patience with the Lovie Smith regime, the Illinois head coach said this year’s roster is his strongest yet, and around the conference, Illinois’ improvements haven’t gone unnoticed.

“(Last season) their o-line was young,” said Nebraska defensive lineman Khalil Davis. “I know now that they have a veteran o-line, so they’re gonna be pretty good (upfront).”

Line play was the strong component of the team, evidenced by senior running back Reggie Corbin’s career season.

Uncertainty at the quarterback position reiterates the Illini’s need for security at the line. Both starting quarterback frontrunners bring radically different styles, as pocket-passer, and graduate transfer from Michigan, Brandon Peters will compete against dual-threat true freshman Isaiah Williams.

No matter who wins the job, steady line play will certainly smooth the transition.

On defense, Lovie will take over as defensive coordinator for a group among the worst in FBS.

The unit, which was made up of a young roster last year, returns most of its key players from, except linebacker Del’Shawn Phillips to graduation and defensive lineman Bobby Roundtree to injury. Additionally, highly-recruited linebacker Shammond Cooper and Washington transfer Milo Eifler will provide new talent in the middle of Smith’s defense.

Despite its struggles in 2018, the defense’s potential caught the attention of Minnesota receiver Tyler Johnson, who registered five catches for 68 yards in a 55-31 loss at Illinois last season.

“Illinois has a great defense,” Johnson said. “A lot of young guys (were) out there on the field; they were very athletic on defense. They’re fast, they’re strong and I have to give a hat’s off to their coaching staff.”

Lovie’s impact on improving the defense and the team’s overall record may be criticized this season. The Illini are 9-27 in heading into Lovie’s fourth season. But despite Illinois’ lack of on-field success, Minnesota head coach P.J. Fleck offered an inspirational quote for Illini fans to consider as the program goes through its rebuild.

“Greg Schiano gave me the best advice in coaching I ever got: Never sacrifice what you really want down the road for what you want right now,” Fleck said. “Everybody wants to be on step four before you’re on step one.  You can’t skip any steps, you can’t skip ’em. Even if that means going backward and down a dark and ugly corridor, you go down it if you have to go down it, and that’s what’s hard.”

Illinois granted Lovie a contract extension this winter, which emphasizes the existing belief he can turn things around. The 2019 season will be a litmus test as to whether or not he actually can.