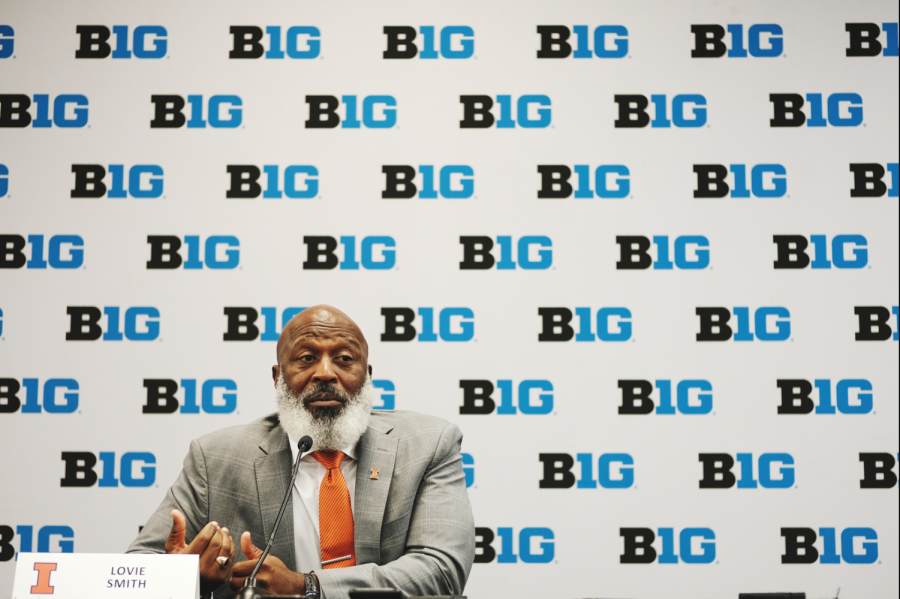 As training camp quickly approaches, Illinois still has a big question mark at the game’s most important position.

As of July 18, head coach Lovie Smith and his staff have four competitors fighting for the starting quarterback job: Brandon Peters, Isaiah Williams, Matt Robinson and Coran Taylor. According to Smith, Peters and Williams are emerging as front runners for the job.

“We have Matt Robinson, Coran Taylor went through spring ball. (It) felt like we needed more — simple as that. Really excited about Isaiah Williams coming in,” Lovie said. “He’s going to bring a lot of excitement eventually to our team. But I wanted a guy with some experience, too. It just worked out that way. Brandon became available late, and we got together and it felt like a good marriage. We’re excited what he’s going to do for our program.”

On paper, the two players are polar opposites. Brandon Peters is a 6-foot 5-inch, pocket-passer who transferred from the University of Michigan, while Isaiah Williams is a 5-foot 10-inch athlete who comes to Champaign as a four-star recruit.

“Last year, offensively, we did some good things. We had a new offensive attack that we brought in led by Rod Smith, guys had career years, especially Reggie Corbin,” Lovie said. “So offensively, I feel like we did enough to win more football games.”

Lovie is aware of these physical discrepancies and likes the way his quarterbacks are shaking out so far.

“We were looking for the best available, best possible guys we could add to the mix. When you have four scholarship quarterbacks, you don’t want a guy with the same skill set. But eventually, you have to be able to throw the football, so that was a big part of that. I think Brandon will end up being a better runner than he is given credit for, and a player that has a running reputation a little bit, I think he’ll end up being a better passer than he’s given credit for. I feel like our quarterback position in time is going to be in pretty good shape,” Lovie said.

In terms of experience, Peters has the advantage over Williams after playing six games in 2017 and two in 2018 for the Wolverines. Williams comes to campus as a freshman.

“We wanted a player with experience and a guy that had played at a high level,” Lovie said. “He started at one of the top programs in the country. Eventually, quarterbacks have to be able to throw the football. Brandon can throw it. First thing he said (was) ‘Coach, I’m a better athlete than I’m given credit for.’ I just like talking ball with him, what little I’ve had the chance to do. I just think he can bring something different to the team. He looked around, and he chose us.”

At Michigan, Peters completed 58 of 110 career passes for 680 yards, four touchdowns and three picks good for a 111.2 quarterback rating.

Williams was ranked as the No. 6 athlete in the 2019 recruiting class and the No. 2 recruit out of Missouri.

Both quarterbacks will look to build chemistry with their new receivers as soon as possible. A new name in the quarterback slot could present challenges for Illinois, but adding a new receiver tacts on another level of adjustment. The transfer of former USC wide receiver Josh Imatorbhebhe and a need for more playmakers on offense adds pressure on the starting quarterback to take command of the offense quickly.

There’s still time to add more quarterbacks to the roster, with four-star recruit CJ Dixon expected to visit the Illini in late July, according to his personal Twitter account.

The Illini, and whomever their starting quarterback will be, kick off the 2019 season against Akron August 31 at 11 a.m. in Champaign.