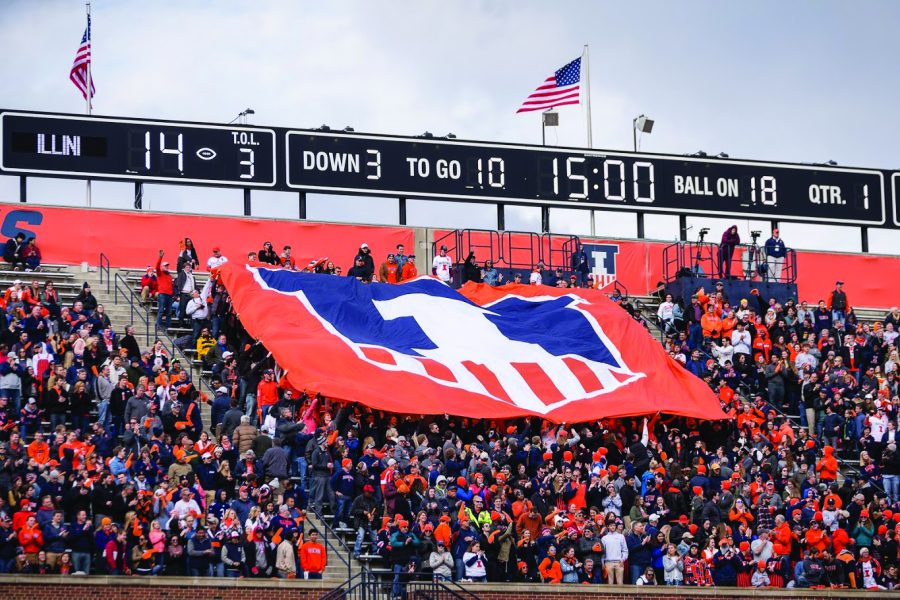 The Block I student section holds up a banner with the Illinois shield logo during the game against Minnesota at Memorial Stadium on Saturday, Nov. 3, 2018. The Illini won 55-31.

A New Face at Quarterback

Lovie Smith answered one of Illini Football’s biggest offseason questions by naming redshirt junior Brandon Peters as the starting quarterback for week one. Both redshirt freshman Matt Robinson and true freshman Isaiah Williams showed flashes of brilliance, but it became a clear choice to name the Michigan transfer for the starting spot. In four games at Michigan, Peters proved capable of guiding the Wolverines to some Big Ten wins, and the Illini are anticipating even more success as their starter.

Peters comes in with a much more talented supporting cast than last year’s starting QB AJ Bush. The Illini sport a veteran offensive line as well as six running backs, giving Peters plenty of room to rely on the running game and take advantage of one-on-one situations in the passing game.

As for Williams, although Rod Smith remains committed to him being Illinois’ quarterback of the future and he showed plenty of promise during training camp, he still has room to grow as a passer. Both Peters and Robinson had better training camps, and for now, it’s likely that Robinson will be Illinois’ primary backup, but Williams may see playing time very soon. For now, the starting spot belongs to Peters, but the rotation at quarterback can very well change throughout the course of Big Ten play.

It shouldn’t come as a surprise that the players were elated to check out their new facility. Illini Football’s social media channels were full of happy faces Sunday. For Lovie and the rest of the coaching staff, it was a “different day for Illinois football.”

The timing of the facility opening and the symbolism behind it wasn’t lost either. Despite the team’s struggles over the last few seasons, there’s optimism in the Illinois locker room that the future is getting brighter. Having alumni and fans standing behind the team and donating money towards the new facility sends a clear message from the Illini faithful. They feel the tides are changing too and were willing to put the money where their mouths are.

Freshman cornerback Marquez Beason was carted off the practice field near the end of training camp. He’s had a brace on his right knee and has been getting around on crutches ever since. Last Monday, Smith announced that Beason, a four-star recruit from Duncanville, Texas, will undergo season-ending knee surgery in the near future.

He was the No. 91 recruit in the nation by ESPN, and the No. 108 recruit by both 247Sports and Rivals when he committed to Illinois back in December 2018. Beason was considered to be Illinois’ best recruit since 2009, and he received offers from other programs such as Texas A&M, LSU and Ohio State. As a senior last year, he led Duncanville to a runner-up finish in the 2018 6A Division state title game after the team earned a 14-1 record.

Coming into the season, Beason was expected to be a key piece in the depth chart for the cornerbacks, and was projected to play behind starters Nate Hobbs and Quan Martin. Now with Beason out for the season, the Illini will look to fill that spot by leaning on players like junior Nick Walker and freshman Devon Witherspoon, the latter of whom was a late addition that arrived during training camp.