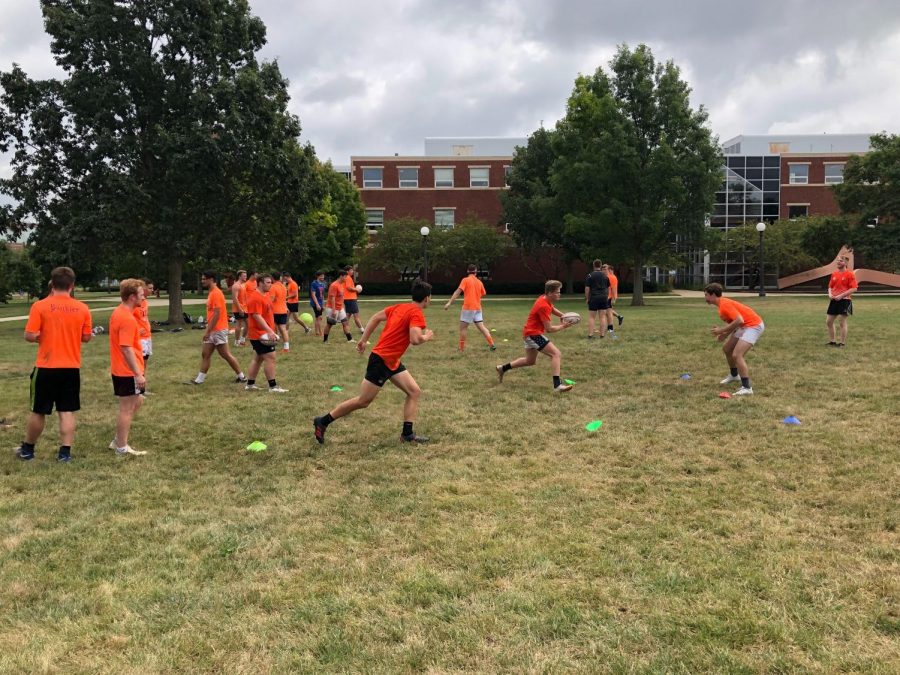 The Illinois Rugby team running two-on-one drills on the South Quad on Thursday.

As the clock strikes noon, chimes of the McFarland Memorial Bell Tower in the South Quad ring to signal the end of the first preseason training session of the day for the Illinois rugby team.

It’s still a new process to adjust to, as the team experiences its first year having a preseason training schedule, run by a first-year head coach. But the goal always remains the same: solidifying themselves as a top-three team in the Big Ten.

With conflicting schedules and a shortage of players in years past, organizing a consistent practice schedule before the season never worked out. This year, however, things took a turn for the better.

“I was expecting fully to get 15-20 people out here this preseason,” said team President Max Spiritos. “We have 30 people who are rotating in and out because they have to move-in or have jobs; but we’re having a good 30-35 people coming to practice and that is awesome. We usually don’t get those numbers during the season, especially toward the end.”

“In the past, the team hasn’t always been this committed,” Spiritos said. “It was more of a social commitment to playing rugby on the side. Since I’ve been here with our old coach David Petty and then now Joey Rasmus, they’ve definitely been drilling to get to this more competitive nature. We’re all taking it in stride and really wanting to be that better team we can be.”

Joey Rasmus, a former rugby player himself, is tasked with maintaining the upward trend the team has been experiencing recently. He has plenty to work on as the team added an influx of new players with varying levels of experience. Rasmus credits the steady rise in numbers to the mounting popularity of the sport and Illinois’s prestige in the rugby world.

“Well, it’s the fastest growing team sport in the country,” Rasmus said. “Since the professional era, and since D1-A became a thing, we actually just became ranked for the first time in the country this past spring at 39th in the country.”

“We’re the only D1-A university program in the state of Illinois,” Rasmus said. “So for kids in the Midwest, we’re one of the only options they have if they want to go after a professional contract. I think we had seven or eight guys come in this year and have been out at camp specifically looking to play rugby who played in high school and are looking to play at a higher level.”

As the second full-time head coach in the team’s history, Rasmus focuses solely on the tactics of the game and getting the team ready for game day. He coaches players that have their eyes set on professional rugby and those who have never even played the sport before. Additionally, Rasmus inherits a young roster who require both mentoring and time for development.

Either way, Rasmus is excited to lay the foundations of what he and the team hopes is the beginning of a long era of conference supremacy.

“It’s just laying the groundwork for a really successful program that hopefully turns into a dynasty,” Rasmus said.

The team will rely on the handful of veterans to answer the call for a leader and continue to build on the steady progress made during the preseason.

Senior players like Chris Royer, are already taking measures to counteract the excess youth on the team.

“Right now I feel like the team is really young, and that’s a challenge for us,” Royer said. “But obviously, that’s going to change in the future, the more guys that stick with it, the better we’re going to be in the future … there’s not too many seniors because we didn’t have that strong culture that kept guys in the past. Over the past couple of years we’ve built [the culture], and now we’re pretty strong with it.”

The executive board, made up of players like Spiritos, handle the logistical side for the team such as traveling, lodging and schedules. The majority of the team’s capital comes from dues paid by the players, but with a growing team comes more obstacles.

Since rugby isn’t an official Illinois sport, meeting basic necessities like having a field to practice on is an uphill battle.

“Obviously we don’t have access to our own field due to the football team practicing there during the offseason,” Spiritos said. “That’s kind of tough on morale because we can’t go out and play until the second week of school.”

Such is the life of a non-funded University team. With their first game on Sept. 7 at Lindenwood Belleville, followed by six Big Ten games, the team’s ability to face adversity will be tested early, but the players aren’t worried.

“We have really high expectations for this season. In the past it’s sort of been a lackadaisical, but we’ve turned that around in the past couple of years. This is our first time doing preseason, and we have more numbers than we would at a first practice.” Royer said.

Both the players and coaches continue to rely on the brotherhood that has developed over the past few years.

“I think we’ve got one of the tightest knit groups, one of the best cultures in the Big Ten. That’s something that the other coaches in the Big Ten seem to harp on is that our guys seem close as they push themselves for each other a lot harder than other clubs.” Coach Rasmus said.

It seems that several non-funded Illinois teams such as the rugby team, the men’s club volleyball team and the esports teams on campus are highly successful organizations, yet they don’t receive the same pomp and circumstance as official school sports do. A common theme among them is a desire for the opportunity to show how entertaining their sports can be compared to the major varsity sports.

“We’d love to have more support from the students. If any of them can make it to a game, these boys work hard day in and day out. They train at the same levels that varsity athletes do, and it’s a really fun game to watch. I think students would really enjoy it,” Rasmus said.