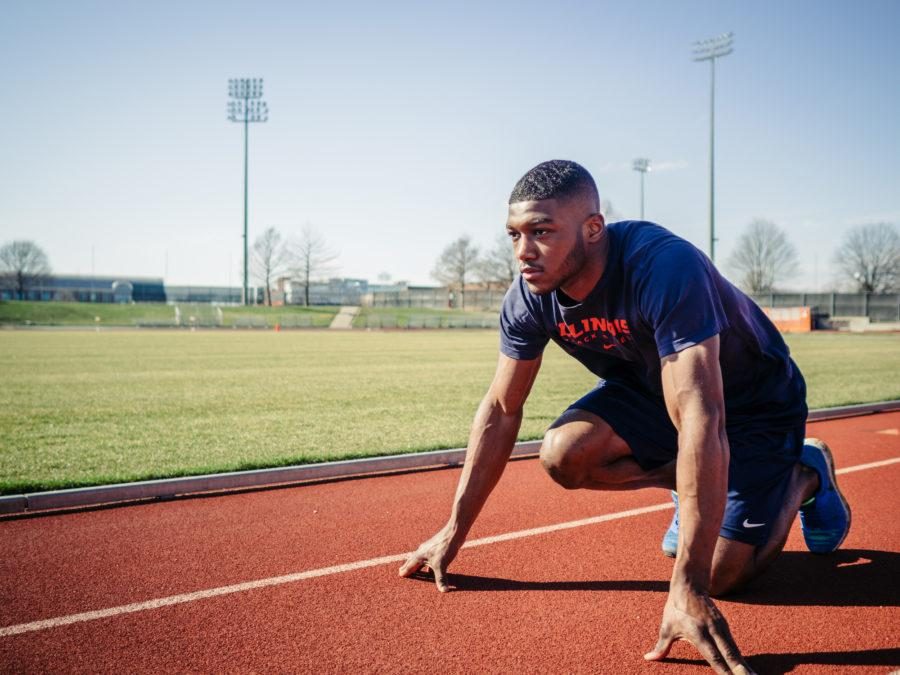 Former Illini sprinter Jonathan Wells kneels in a starting position during practice. Wells and fellow graduate sprinter Devin Quinn concluded their spring seasons at the USA Track and Field Outdoor Championships in July. Quinn graduated from Illinois in May while Wells has one year left of eligibility.

He’s one of the fastest Illini in the history of Illinois men’s track and field program, and over the summer sprinter, Devin Quinn competed against some of the best sprinters in the nation at the U.S. Outdoor Track and Field Championships.

Last spring, Quinn finished up his time as an Illini by dashing his way into the record-books; during the outdoor season, he both set and reset the school record in the 200-meter dash and broke both the Illinois and Big Ten record in the 100-meter dash with a time of 10.0, edging out former Illini Andrew Riley’s record time of 10.02. Quinn ended his outdoor season at the NCAA Track and Field Championships, where he placed seventh in the 100-meter and earned First-Team All-American honors.

This season set Quinn up for his first USATF appearance on July 25, as he ran in the 100-meter preliminary heat. Clocking in a time of 10.56, Quinn missed the cut to advance to the next qualifier and later ran in a 200-meter preliminary on Saturday where he finished with a time of 21.10. Quinn’s performance at the U.S. Championships followed his first professional meet, which took place in Lausanne, Switzerland, on July 5, where Quinn competed in the 100-meter dash.

While Quinn didn’t walk away from the U.S. Championships with a medal, redshirt senior and fellow Illini Jonathan Wells took home third place in high jump. Wells previously finished in sixth at the 2018 U.S. Championships and had the highest finish of any current or former Illini in any event final — former Illini Gia Lewis-Smallwood and David Kendziera both took fifth place in the discus final and 400-meter hurdles, respectively.

Wells cleared each of his attempts in the High Jump final at 2.11, 2.16, 2.21 and 2.24 meters without a miss — a performance track and field head coach Mike Turk complimented.

“I was extremely impressed that he was clear with no misses up through 2.24 meters,” Turk said per FightingIllini.com. “It was amazing because he was so calm, so focused. It’s really a sign of maturity.”

Although Quinn is finished wearing orange and blue, Wells will be returning to Illinois to continue his track and field career this school year. The Illini will be back in action in 2020 with the start of indoor season.