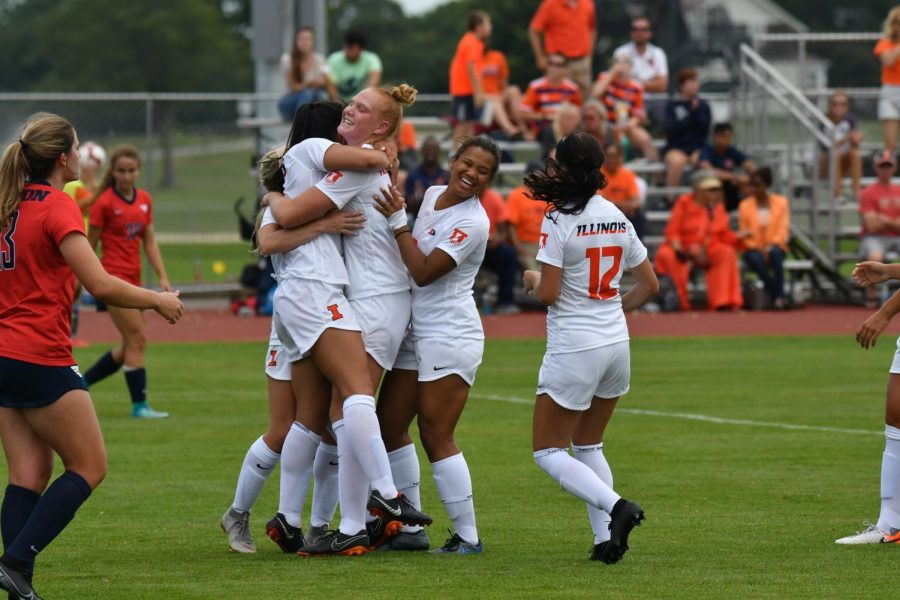 The Illinois soccer team celebrating their win against Dayton over the weekend. The Illini won 3-2.

Illinois soccer defeated Dayton, 3-2, Sunday in Champaign. The Illini had a balanced effort scoring as all the goals came from different players.

The first half was relatively quiet scoring-wise, ending in a 0-0 tie. Dayton’s offense got more shot opportunities than Illinois’ with five in the first half in contrast to the Illini’s three shots.

Cunningham got two saves in the first half and ended the day with seven total.

The Illini also took an early hit when junior midfielder Hope Breslin left the game with an ankle injury within the opening minutes of the game. Breslin returned immediately after halftime.

The second half was much livelier, as the Illini got three goals in the first fifteen minutes.

In the second half, Illinois got a corner kick within the first minute but was unable to capitalize on it — similar to the first half corner kicks.

Several minutes later, Illinois got another corner kick, and the offense picked up. At 48:44, Breslin put one in the net.

Following a Dayton foul at 52:20, Veland scored on a penalty kick to make it 2-0. She was the only senior to score Sunday.

At 60:14, freshman midfielder Eileen Murphy scored her first collegiate goal for Illinois to make it 3-0 for Illinois.

At 74:37, No. 28 Audrey Steiert from Dayton got a yellow card. Veland missed the penalty kick, keeping it a 3-2 game, and there were no more goals for the rest of the game.

Despite the win, head coach Janet Rayfield felt there was room for improvement.

“I think we just had too many unforced errors today, and that caused us not to be able to do what we really wanted to do,” Rayfield said. “We’ll address our movement off the ball. We’ll address our technical ability in terms of connecting passes, and (sometimes), it’s just our composure.”

The Illini play at Pepperdine on Friday and won’t return to Champaign until Sept. 15.