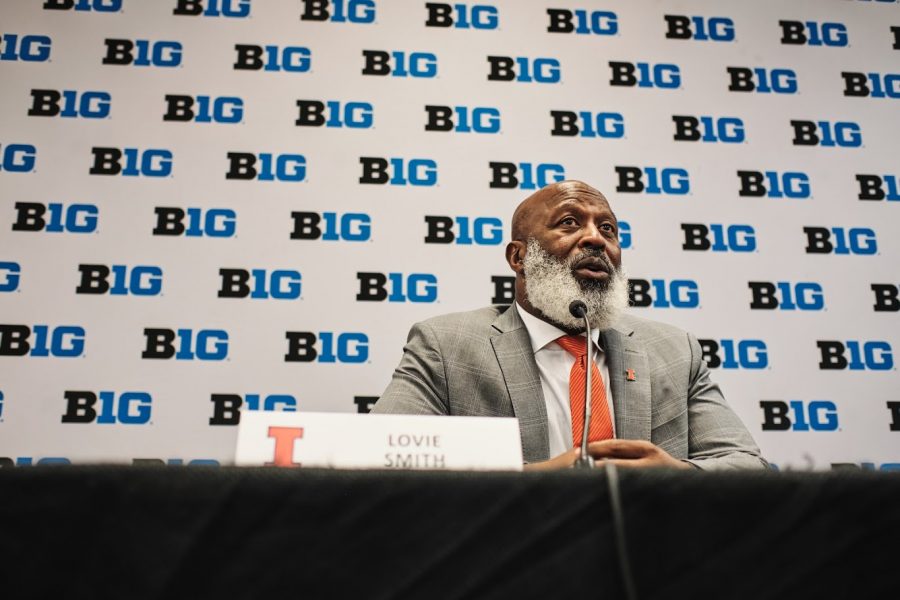 Lovie Smith talks at a press conference. Smith will begin his fourth season with Illinois on Saturday when Illinois hosts Akron at Memorial Stadium.

Saturday morning marks the beginning of Lovie Smith’s fourth season in Champaign as Illinois prepares to host Akron. Expectations are a notch higher than previous seasons in Smith’s tenure since the roster is more talented and suited to the scheme than ever before. The Illini will be led on offense with Brandon Peters as quarterback; the graduate transfer from Michigan won the starting job in camp. One of the standout players from camp on offense was sophomore tight end Daniel Barker, whose production will be critical at a position of need for the Illini. While Akron didn’t have the most successful 2018 campaign, the Zips made a habit of playing Big Ten teams close, making Saturday’s contest far from chalk.

At the conclusion of fall camp, Smith announced Brandon Peters would start the Illini’s opening game as quarterback. The graduate transfer, who has two years of eligibility remaining, passed for 672 yards and four touchdowns in six games at Michigan as a redshirt freshman in 2017. The Wolverines went 2-2 in Peters’ four starts in 2017 before Shea Patterson transferred in from Ole Miss and took the starting job.

Though his tape at Michigan would suggest Peters is mainly a pocket passer, Smith is excited to see him show off his versatility.

“Our quarterback, Brandon Peters, (will) lead our team,” Smith said. “Love everything about him. (He) can throw it, he can run, and he’s moving into a leadership role quickly.”

Peters is coming from a run-heavy scheme during his time at Michigan, which may help him adapt to a system that will prioritize feeding its talented backfield, one Illini offensive coordinator Rod Smith said has “about five” starting caliber tailbacks at his weekly press conference.

Peters picked up the Illinois system as quickly as he could. Given the deficit in time he had with the playbook coupled with having to complete the necessary coursework to get eligible is what has impressed Lovie the most.

“Brandon knew he needed to get a lot of hours to be a graduate (transfer) from the University of Michigan, and that is an awful lot to get it done in that amount of time,” Smith said. “He’s also picked up our offense quickly.”

Illinois was dealt a major blow in April when Georgia-transfer tight end Luke Ford was ruled ineligible for the 2019 season. For a group with low production in 2018, the loss of a player with the caliber of Ford looked to be a sign that struggles would continue.

However, sophomore Daniel Barker turned heads during camp, displaying good speed and sure hands to go along with a body built to block.

“What (Barker) brings is he’s a big body,” Smith said. “He’s a physical guy. He can block. He could be a good endline tight end to block defensive ends. You could (also) spread him out, and he can run all the routes, (and) he can catch the football.”

Throwing to tight ends is something Peters is accustomed to coming from Jim Harbaugh’s system. Of his four touchdown passes at Michigan, three went to tight ends, and Barker certainly fits the profile of the type of tight ends Michigan has had over the past few years: tall, bulky, a skilled blocker and possessing quality speed for his size.

A look at the Zips

Akron finished 2018 4-8 but did knock off eventual West Division Champion Northwestern in Evanston early in the season.

“Wide open offense coming at us, I think they have seven offensive starters returning and a couple on the defensive side of the football,” Smith said. “Last year, of course, they beat our rival up north in purple, and they also played Iowa State hard.”

The Zips are led by first year coach Tom Arth, who at 38 years old will be making his debut at the FBS level, having previously served as a head coach at Division III John Carroll University and most recently in the FCS at University of Tennessee Chattanooga.

Kato Nelson will start at quarterback for the Zips. The junior is coming off of a 2,339-passing-yard 15-passing-touchdown season. He also ran for 303 yards and 1 additional score.

While the Illini have long to go before the rebuild is complete, Saturday’s contest will serve as a barometer for how much progress they’ve made after a full offseason of preparation.