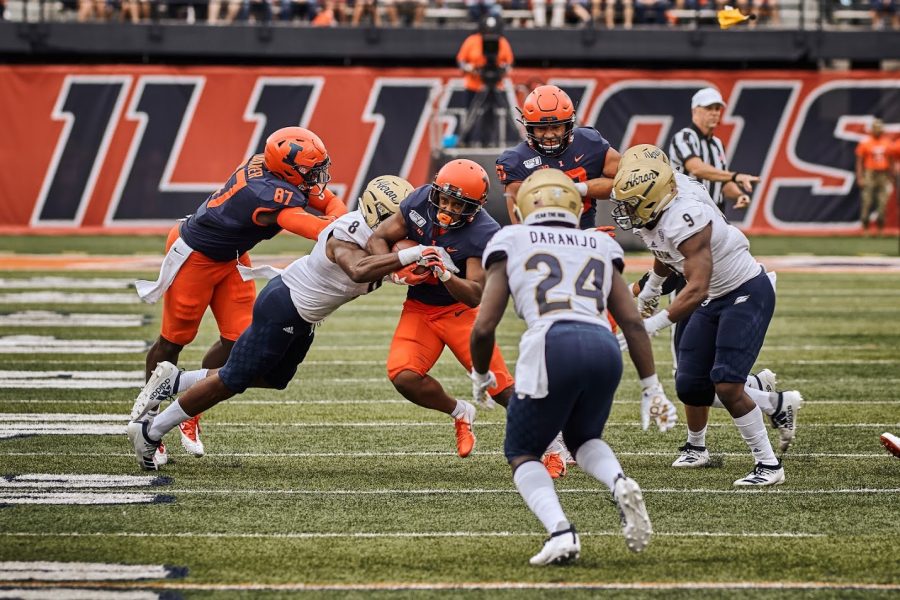 After much anticipation, the 2019 Illinois football team finally took the field Saturday, hosting Akron. Although the competition wasn’t the most challenging, head coach Lovie Smith’s team took care of business in convincing fashion, rolling to a 42-3 victory. For the Illini offense, the execution wasn’t always spot-on, but the gap in talent proved too much for the Zips regardless. Defensively, Illinois completely shut down an albeit poor Akron offense, but the performance featured multiple standout individual performances nonetheless.

42 points are about as good a start as the Illini could have hoped for. Transfer quarterback Brandon Peters took care of the football, each of the Illini’s standout running backs got positive touches and the new additions at receiver made their mark.

The offense came out of the gate humming, and Peters led them down the field on a 63-yard drive capped off by a 9-yard touchdown pass to senior tight end Justice Williams.

“It was a good momentum swing,” Peters said. “Just to start off strong and get in the endzone, really prove a point that that’s what we’re gonna do all day.”

It was a welcome sight for Smith to see Mike Epstein back on the field after an injury ended his 2018 season abruptly. The junior ran for 45 yards on 8 carries, but he did leave the game with an unspecified injury.

“We’re a running football team,” Smith said. “Of course (for) Mike Epstein it was good to get him back out there. We spread the ball around.”

Peters covered the basics to be successful as a quarterback; he took care of the football, and he avoided sacks as best he could (taking just one).

“That’s what we’ve seen from (Peters), under control, making good decisions,” Smith said. “I thought he made great decisions out there, timely runs also.”

Indeed Peters was better than advertised in terms of rushing as he picked up chunk plays and even found the endzone, darting through the path his blockers opened up for him from 20 yards out.

While his timing with the receivers was not in harmony yet, he still tossed three touchdowns, including one to USC transfer Trevon Sidney. Sidney and fellow Trojan transfer Josh Imatorbhebhe totaled 60 yards receiving combined. Fall camp standout Daniel Barker also notched a touchdown reception, proving that his strong camp performance was a sign of things to come.

Giving up just three points and taking the ball away twice is about as good as it gets. For a unit that was among the worst in the country a season ago, it was a welcome sight.

“Offense has played good football for (a) long period of time, defense needed to step up and I thought they did,” Smith said. “Not pleased with the first drive, (Akron) had a couple of big plays in there. After that first series, took care of business, played the run well.”

Junior Jake Hansen led the way with a forced fumble, a recovery, an interception, a half-sack and seven tackles.

While the unit underperformed to say the least in 2018, Lovie Smith is a defensive-specialized coach and wanted to make forcing turnovers a priority as he took over as the team’s defensive coordinator this offseason.

“That’s Coach Smith ball right there,” Hansen said. “Getting after the ball and getting takeaways that’s what we pride ourselves on.”

USC transfer Oluwole Betiku added 1.5 sacks and he was not alone as Tymir Oliver, Owen Carney, Lere Oladipo and Ayo Shogbonyo also joined in on the sack parade.

“Talked a lot about Milo Eifler and the type of impact player he can be. That’s about as good of a hit as you’ll see from a linebacker,” Smith said.

Though the season is far from over, the Illini had about as good a start as they could have hoped for. Next week, Illinois heads on the road to take on UCONN, which had one of the worst programs in the FBS a season ago.