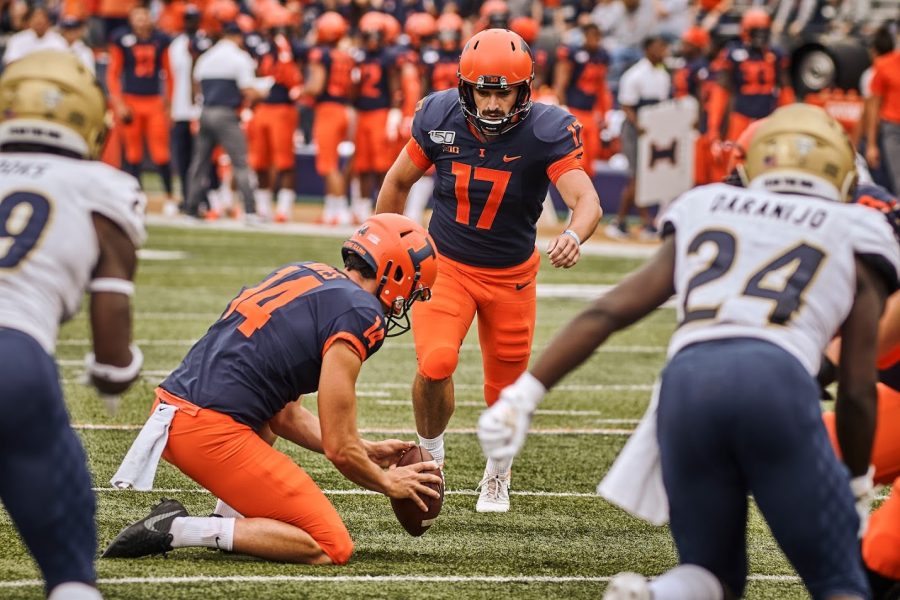 Captured at Memorial Stadium on 31 Aug, 2019 by Jonathan Bonaguro.

I hate to be that person, but are the Illini the best team in the country?

I know, I know. That sounds completely ludicrous.

All they did was defeat a lackluster MAC team, but they looked good doing it. I don’t think it’s too far of a leap to believe that they are better than Alabama and Clemson.

Who cares about The Ohio State when Illinois is literally right here?

You smell that? The sweet scent of the 2019 NCAA Championship?

But the hope that a win like Saturday’s allows those things to be pondered rather than completely dismissed.

The Illini started off pretty hot in the first half.

“We knew we didn’t want it to be close,” Kendrick Green said. We have been talking about that all week, so we wanted to get points on the board pretty quickly.”

Though after its initial rush of points in the first half, the team did their classic fizzle out in the second.

The difference between then and now? Illinois didn’t give up points in the second half.

And yes, I know, it was just Akron, but we still saw what it could be capable of for a tougher competitor.

Giving up points in the back half was the ultimate downfall of the 2018 Illini. Even the team can admit: The defense was simply lacking.

It wasoften confused and both literally and figuratively dropping the ball.

Now the guys are making hits they are proud of while being thirsty for more.

When asked if his game-shaking hit in the third quarter was the best of his career, Milo Eifler responded: “Oh no, we still have 11 more games to play. ”

This kind of confidence is what has been seriously missing. Oftentimes in the post-game conferences, the team talked about its confusion on the field that led to a lack of confidence in its game play (though it didn’t explicitly say it).

After tying up some loose ends and Hardy Nickerson leaving the team, defense development began to rapidly take place in the same fashion the offense made a turnaround in the previous year.

And though the defensive side of the ball has much improvement, we can’t ignore that with yet another quarterback, the offense has continued to thrive.

Brandon Peters went in trusting his offensive line and asked them to do the same in return.

“He just told us ‘if you don’t see the ball, just keep blocking. I’m trying to make something happen,’” Green said.

I realize some of the claims I opened with were quite ridiculous and there is still a way to go, but Saturday’s game allowed us to see a concrete foundation to build from.

Last year, saying those wild claims would have been met with hysterical laughter. Now, merely a giggle.

You know what that is? Growth.

Or maybe Eifler said it better: “a new swagger for the team.”