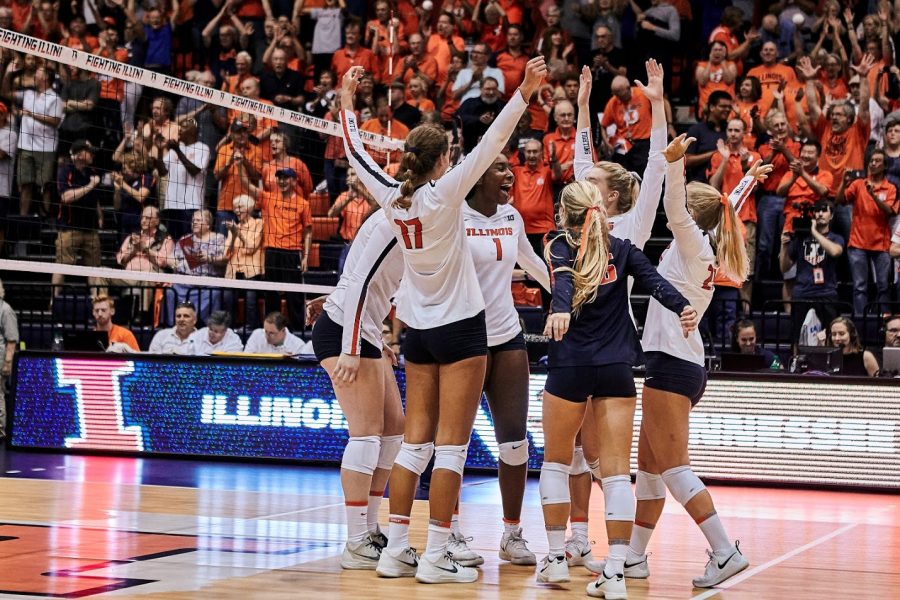 The Illini celebrate at Huff Hall on Sunday after scoring a point.

The No. 6-ranked Illinois volleyball team opened up its season with an intense come-from-behind win against No. 19-ranked Tennessee in Knoxville, Tennessee, Friday night.

The Illini were down two sets to zero against the Volunteers and had even lost their lead late in the third set. However, the team was able to rally in the last three sets behind the double-double performance of senior outside hitter Jacqueline Quade.

Quade made a large impact on the offensive and defensive sides of the court, putting up a career-high 31 kills on 85 swings to go along with 15 digs. This was Quade’s 14th career double-double.

“I think every first game of the year, it’s just exciting to get to play against someone other than ourselves,” Quade said. “Just coming out and seeing what the team is like now and (showing) people all that we’ve worked on in the preseason.”

The Illini were facing a loss while down 18-16 in the third set, but, behind a block late in the third by freshman middle blocker Kennedy Collins, the team was able to win the set and extend the match.

Senior middle blocker Ashlyn Fleming discussed how the Illini overcame the strong defense by the Volunteers.

“I think with just being smart as we played and then just talking to one another it helps so much with our defense behind us. Telling us what’s open and what we can see, and that also just starts with the pass,” Fleming said. “We were passing really well tonight.”

The second half of the fourth set belonged to the Illini. After a Tennessee challenge replay, Illinois went on an eight-point run, led by Quade, to get up 17-11 on the Volunteers. Because of the run, the Illini were able to tie up the match at two sets each.

The last set, which saw nine match points between the two teams, might have been the most intense of the night. The winning kill came from the 6-foot-4-inch California-native Fleming.

Two freshmen made big impacts during their first game for the Illini. Collins and middle blocker Kyla Swanson both had multiple blocks and kills in crucial moments for the team, helping overcome the deficit.

“It’s awesome,” Fleming said. “I think we all just love to see moments like that, and it’s just kind of exciting for the future because we know that we can all just compete and come in and work each day.”