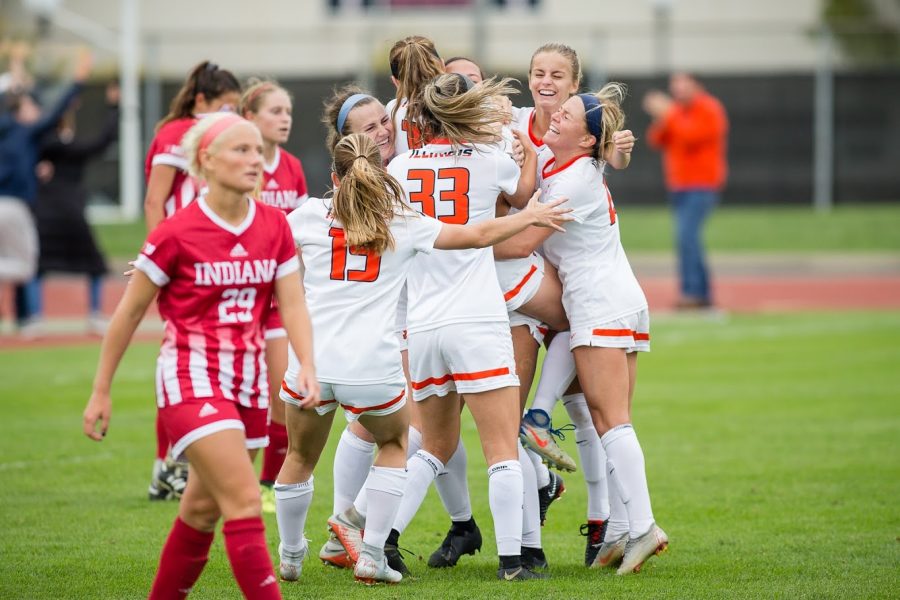 Illinois celebrates after winning the game against Indiana at the Illinois Soccer Stadium on Oct. 14. Illinois hopes to improve their current record of 7-1 when facing off against Iowa and Nebraska this week.

For Illinois soccer senior defender Lexi Carrier setting goals, long-term and short-term, is important. The Cincinnati native has set goals for herself and her team this year, and she’s hoping to achieve most, if not all, of them. Her main goal: to be better than yesterday.

Illinois is currently at a 3-1 record for the season with no conference games yet. In the 2018 season, the Illini made it to the Big Ten semifinals, their first time back in six years. In the quarterfinals, Illinois went up against fourth-seeded Wisconsin and came out with a 2-2 score but advanced to the semifinals with 3-0 in penalties.

“That was the first year we had made it to the semifinals in my three years that I’ve been here,” Carrier said. “Being able to travel with my team for such an important tournament was incredible and beating a ranked team like Wisconsin made it even better.”

While the Illini were mainly focused on the competing, Carrier said they were also focused on the little things, like their individual selves and the material things.

“We got to choose a Big Ten gift which was really cool,” Carter said. “The little things from making it that far definitely mean the most,”

Carrier credits a lot of her success to her family and the fans as well. Her mom is an Illinois alum, so when she was looking at schools, Illinois was on the list of the ones she wanted to attend.

“You know, when your parent goes to college, they definitely want you to at least consider touring where they went to hopefully get you to go there as well,” Carrier said. “I came to visit and fell in love with campus immediately. From the athletics to the academics, everything I wanted to get out of college, Illinois had. I could really see myself thriving here and that Illinois would help me be better than yesterday.”

Illini Pride’s soccer fan section, Hot Shots, and the other fans in the stands fill the team with such gratitude and pride, the team looks forward to playing at home so they can feed off the energy.

“The energy that Hot Shots and our fanbase brings to our games add so much more momentum,” Carrier said. “It’s just a great reminder of what we represent and that we’re playing for so much more than ourselves.”

Senior Lindsey Kelso, an adviser in Illini pride, shared why Illini Pride is so important to the University.

“We get so involved because we know the athletes love the energy we bring to all the games we’re at,” Kelso said. “We do this for them.”

Carrier is in the Gies College of Business with a dual degree in Marketing and Supply Chain Management. When she graduates, she hopes to work in procurement with either Stern Pinball, Nike or Athleta. She said playing professional soccer isn’t in the cards right now, but if the opportunity presented itself to play professionally, she’d consider it.

“I’m very passionate about what I’m studying,” Carrier said. “But if someone from the USA Women’s team came to me asking if I’d want to play for them, I don’t think I’d say no. In all honesty, though, my dream is to work for Disney and create new characters.”

This may be her senior year, but Carrier isn’t planning on calling it quits until she knows she put her all into this last year and she knows she and her team were better than yesterday.

“This is probably my last year playing,” Carrier said. “I just want to leave it all out on the field.”