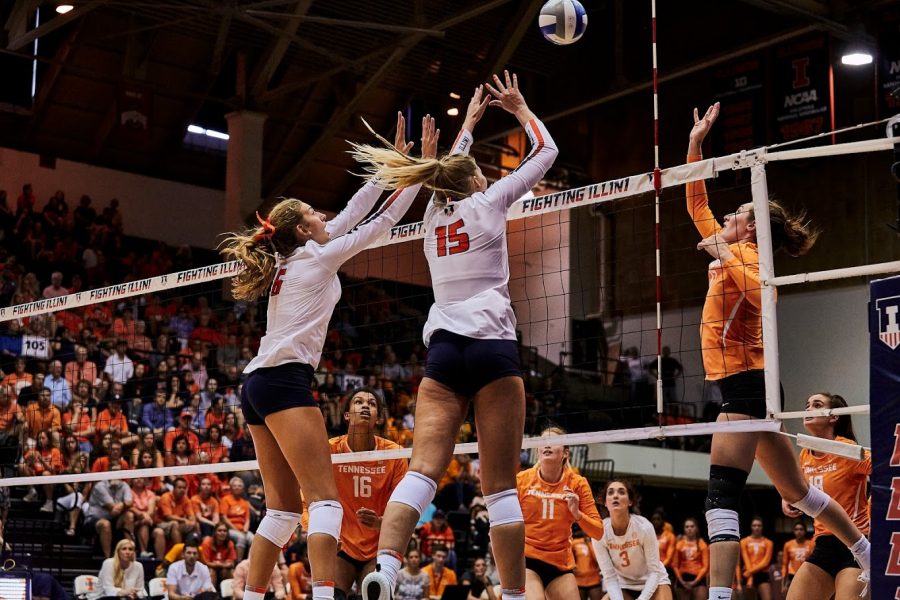 After a 14-0 start last season, the Illinois volleyball team suffered its first two losses of the season — in the same weekend — when the team competed in the Big Ten/Pac-12 Challenge this weekend.

The first team the Illini faced in the Big Ten/Pac-12 challenge was No.16 Washington. The Illini split the first four sets, forcing a fifth set in which the Illini lost 15-10 after being tied 7-7 midway through the set.

This was the third time in the first three games the Illini had to play the fifth set, and unlike the first two, it didn’t end in their favor.

Senior Jaqueline Quade led the team in the first outing with 23 kills and junior setter Diana Brown had 51 assists and 12 digs to earn a double-double. Right behind Quade was senior Beth Prince totaling 14 kills in her first match for the Illini this year. Prince is one of the Illini who’s seen injury trouble at the beginning of the season.

“It’s always really nice to contribute in whatever way,” Prince said. “It was nice just to be able to get back in the gym and practice with the girls last week.”

The team had only one day to try to bounce back from its first loss and prepare to play Colorado in the second game of the Big Ten/Pac-12 challenge.

Colorado applied pressure to the Illini, quickly winning the first set 30-28. The team didn’t stop the pressure as they continued to win the next two sets, completing the sweep against the Illini. This was the first time the Illini have failed to win at least one set in a match since they were swept by Wisconsin last October.

Quade put up 15 kills in the game with a 34.6 hit percentage while Brown assisted 30 times throughout the three sets the Illini played.

As for areas of improvement for the Illini, Quade thinks the team, as a whole, can step up their game.

“At times we let the other team take control of the match instead of asserting ourselves on them,” Quade said. “You hate to lose like that. It’s easier to take when you lose and you kind of know you’ve done everything you could. I think right now we need to get back to that.”

The team has some bright spots to look at coming out of this weekend. Three Illini who’ve been injured to start the season all made appearances on the court this weekend. Prince was the first of the three to make her appearance, playing against Washington on Friday.

Mica Allison, sophomore setter, transferred from Auburn and made her first appearance of the season on Saturday against Colorado, scoring two kills on six attempts.

The Illini are looking forward to Allison building on the season she had at Auburn, when she made the All-SEC freshman team. Allison had a on the court this successful summer, where she was a member of the 2018 USA Volleyball Women’s Junior National Team.

The redshirt freshman Bruna Vrankovic also made her first appearance for the Illini on Saturday, scoring one kill on a single attempt.

This weekend Illinois will participate in the Redbird Classic, hosted by Illinois State. There the team will play Illinois State, Central Florida and Marquette. Quade looks to get back into the gym to prepare for this coming weekend.

“I would say just getting back in the gym and working on the things that we know went wrong (is crucial),” Quade said. “Losing early on stinks; it’s not fun. But also, it kind of brings out what you need to work on and the team weaknesses. I think for us, going into this week, it’s just time to get to work on those things.”