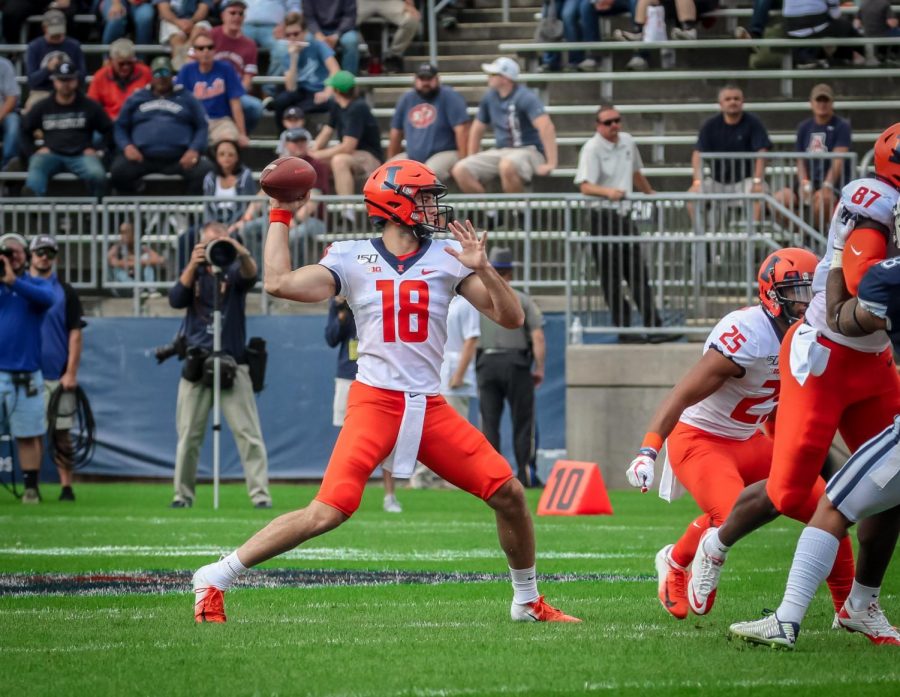 It wasn’t pretty at times, but in the end, it was enough to secure a victory. Recapping his team’s 31-23 win at Connecticut, Lovie Smith didn’t want to lose sight of a win despite not everything going his team’s way.

“When you win, you’re disappointed a little in your play, that was the case,” Smith said. “We didn’t start off the way we wanted to, but good football teams are gonna have to fight through adversity and get themselves (out of) a hole, and it’s really tough when you’re on the road and you get in the hole the way we did, but we fought back through it.”

It was certainly not the start Illinois wanted, as Brandon Peters stared down a slanting Reggie Corbin on wide to his right, allowing Connecticut’s Tyler Coyle to step in front and return the interception 52 yards for a touchdown.

The Huskies would add on, and by the time the Illini possessed the ball for the first time in the second quarter, they were trailing 13-0.

Luckily for Illinois, Peters rallied the troops and led the Illini on an 8-play 75-yard drive, capped off by a touchdown pass to junior running back Ra’von Bonner, as the running back followed Alabama graduate-transfer Richie Petitbon’s lead block before accelerating into the endzone.

After forcing a quick three and out, Peters led Illinois on another long touchdown drive, this time culminating in a 9-yard jump ball that Southern California grad transfer Josh Imatorbhebhe came down with.

“(Imatorbhebhe) as a receiver did some good things,” Smith said. “When teams are committed to stopping the run the way they were, I thought he showed up really well.”

The following Husky possession yielded yet another three and out, and it was followed by another Illini touchdown drive. This time, it was fall camp standout Daniel Barker, who simply slipped away from the Connecticut linebacker covering him to put Illinois up 21-13.

The next Connecticut possession resulted in quite an unexpected outcome. The Illini were down to walk-on defensive back Michael Marchese at safety, as Kirby Joseph was serving a first-half suspension for targeting and his backup, Stanley Green, had already been ejected for the same reason earlier in the first half.

Marchese proceeded to intercept a pass from Connecticut’s Jack Zergiotis, returning it 29 yards to put Illinois in position to kick a late field goal and go up 24-13 at the half.

In the second half, Peters tossed his fourth touchdown of the game, to Imatorbhebhe again, and despite a touchdown and field goal late from the Huskies, the Illini came out with a 31-23 victory, capped by a late interception from senior linebacker Dele Harding as Connecticut was driving to possibly tie the game.

While there weren’t many eye-catching numbers in terms of yardage, Peters’ four touchdown passes and Imatorbhebhe’s two touchdown catches were the standout performances. For an Illini program that hadn’t won outside its conference on the road since 2007, the win was a major step in the right direction regardless of how it happened. Illinois (2-0), hosts 1-1 Eastern Michigan next Saturday.

“You always celebrate a win,” Smith said. “It’s too hard to get a win.”