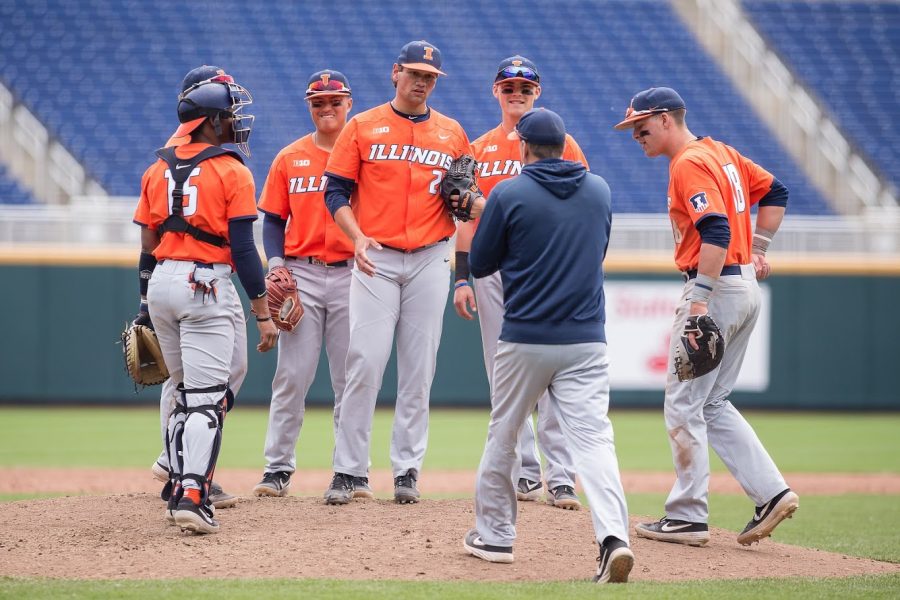 Illinois closing pitcher Garrett Acton (26) gets a mound visit from assistant coach Drew Dickinson during the game against Michigan in the Big Ten Tournament at TD Ameritrade Park on Thursday, May 23, 2019. The Illini lost 5-4.

After a disappointing end to the best season since 2015, Illinois baseball has taken the summer to reflect on the four straight postseason losses in the spring. With a chip on their shoulder and unfinished business, the Illini have used the off months as a catalyst for growth.

Nine Illini played in either the Cape Cod League or the Northwoods League over the summer in hopes of improving their individual games before coming back to Champaign for the fall season.

Among those players was pitcher Aidan Maldonado, who appeared in 13 games as a freshman, starting five of them with a 6.58 ERA. The sophomore played for the Falmouth Commodores this summer in the Cape Cod League where he proved his potential, ranking third in the league for strikeouts per nine innings.

“I went to Falmouth, figured out some stuff mechanically,” Maldonado said. “The people were awesome there, coaching staff, teammates really helped me get back on track where I need to be. I’m just working really hard on mechanics and figuring out what I did wrong my freshman year.”

“Going from not being able to control the ball to being able to throw multiple pitches for a strike. That was a confidence boost for me, and I really found my love for the game again.”

Without star pitcher Andy Fisher and frequent starter Cyrillo Watson, Maldonado’s improvements could earn him more action on the mound in his second season.

At the same, junior pitcher Jimmy Burnette also made some noise during the summer on the Rockford Rivets of the Northwoods League. Burnette only appeared in 12 games between his freshman and sophomore seasons, all in relief.

For the Rivets, Burnette posted a 3.07 ERA over 34 innings pitched. The junior had 43 strikeouts and was selected to the Great Lakes All-Star Team in July.

“I got a lot better this summer,” Burnette said. “Coming back this season, I’m going to feel a lot more confident in myself being out there. I never really had the confidence in myself, which now, I finally have, and now, I think everything else is catching up.”

Sophomores Branden Comia and Cam McDonald also played for the Rivets this summer. Both Illini proved to be impact freshmen last season; McDonald started all 57 games and posted a .281 batting average while Comia started in 42 and hit .255.

McDonald, who was an All-Big Ten freshman team outfielder, said he took the summer to “learn how to use (his) body better while hitting and get reps at third base”.

Head coach Dan Hartleb agreed the summer highlighted the potential of several returning Illini. Hartleb, entering his 15th season with the Illini, is more excited to see that offseason work be put to the test in the team’s fall season.

With 12 freshmen on the 2020 roster, the already young Illini team have a lot of technicalities to learn. However, Hartleb said the leadership of the upperclassmen adds great confidence to the team.

“This group is coming back with a very good outlook and energy,” Hartleb said. “Our returners have done a tremendous job of being good role models for the new players. They’ve done a good job of helping us teach and letting the young guys know what is expected in the program.”

While the upperclassmen have provided the freshmen with guidance and leadership, the young group has created a new sense of healthy competition as the players fight for their starting spots.

“It’s positive having all the young guys because everybody has a chip on their shoulder, everybody wants to play,” McDonald said. “There’s no spots that are taken. Nobody has a spot, and everyone is working to earn their spot.”

After an abrupt ending to the season in the spring, Hartleb is using the fall season as a learning period for both the players and coaches and looking to see what adjustments need to be made before the regular season.

Illinois will begin their quick fall stint on the road at Butler this Saturday before hosting Indiana State and Great Lakes Canadians on Sept. 28 and Sept. 30, respectively.

The Illini are looking forward to playing good competition early but are more excited to be back in Champaign and return to the field.

“You come back, all your close friends are here, you’re just ready to get after it,” Maldonado said. “We have a really young team, but we’re all determined for one goal … I’m just excited to be back with my friends. We’re working really hard, and we’re ready to get after it.”