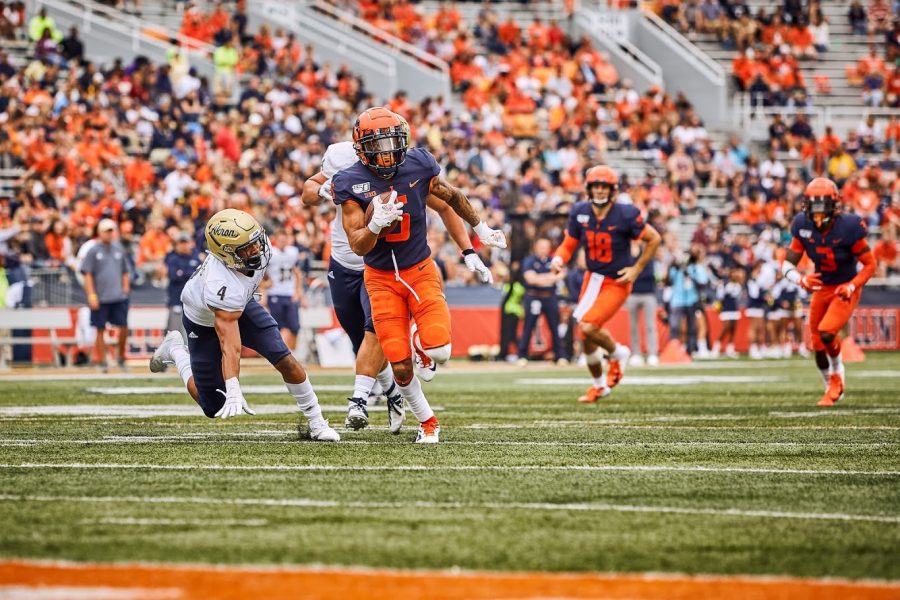 This offseason, Illinois dipped into the graduate transfer market on several occasions – none bigger than the additions of quarterback Brandon Peters from Michigan and defensive end Oluwole Betiku from Southern California. Both have been key contributors thus far, leading Illinois to victory at Connecticut Saturday. Next up for the Illini is Eastern Michigan.

Consistent production in the passing game is an element that hasn’t been there during the Lovie Smith era. On Saturday, Brandon Peters demonstrated the Illini aerial threat may be more potent this season.

After a slow start, including a pick-6 on the first drive, Peters threw three second-quarter touchdown passes and added a fourth in the third quarter.

Labeled a slow, stationary pocket passer coming in, Peters has quickly disproven that narrative with an impressive rushing touchdown week one against Akron, as well as a scramble, before finding Josh Imatorbhebhe on the opposite side of the field for a touchdown at Connecticut, Saturday.

“I told you he’s sneaky athletic. He’s got (something) to him,” said offensive coordinator Rod Smith. “He’s not (an) oak tree back there. He can move when he needs to. You don’t (get) division one basketball offers out of high school if you’re not a little bit athletic.”

In 2018, then-Illini quarterback AJ Bush had a single-game record of only two passing touchdowns, but as is the case with nearly all facets of the team, Lovie Smith wants to forget about last season completely and focus on the games ahead.

Take a quick look at the NCAA leaderboard in sacks, and the name that sits at the top may be surprising. After two weeks of play, Betiku has more sacks than any player in the country with 5.0.

“(Betiku) has been outstanding with his play, and everybody is gonna talk a lot about him,” Lovie said. “When (he’s) leading the country in sacks, you should talk about him.”

Betiku picked up 3.5 sacks at Connecticut Saturday, as his combination of size and speed was simply too tough for the Huskies’ offensive line to handle.

Rated as a five-star recruit by all major recruiting services coming out of high school, Betiku was unable to break into a talented defensive line early on at Southern California and couldn’t stay healthy once he’d gained enough experience to start.

However, the physical gifts of the fourth year junior have never been in question.

“He’s a physical guy playing the run, Smith said. “He’s playing a six-technique (as) a guy that’s over the tight end most of the time. We knew that he could play there. If you just look at his athletic ability, you’d assume he can rush the passer, too –  had a couple of good pass rushes, good spin move. I’m anxious to see him take another step this week.”

Betiku gets his final shot against undersized group-of-five lineman Saturday and will look to pad his sack total before Big Ten play begins.

Thus far in Lovie’s tenure, the Illini have yet to leave conference play with an undefeated record but have an opportunity to do so Saturday. The win won’t be handed to them, however, as Eastern Michigan is a solid team with a knack for pulling off upsets over Big Ten opponents recently.

In 2018, the Eagles knocked off Purdue, 20-19, en route to a 7-6 record that included an appearance in the Raycom Media Camellia Bowl.

Mike Glass III leads the Eastern Michigan offense as quarterback. Through just two games, Glass has picked up more than half of his season total for passing yards in 2018.

The Eagles are coached by Chris Creighton, who is arguably the most successful head coach in program history, being the only coach to lead the team to multiple bowl games. Under Creighton last season, the Eastern Michigan defense was third-best in the country in terms of passing, holding opposing quarterbacks to just 150.2 yards per game.

“This will be the toughest team on our schedule to date,” Rod said. “That’s not coach-talk. That’s not laying anything down. This team is legit. They beat Purdue last year. They’ve been in multiple bowl games. Just watch the film, (and) watch how hard they play and how sound they are fundamentally.”

Since fall camp, Lovie has consistently preached focusing on one game at a time. While there are bigger opponents on the horizon, Illinois will need to handle its business against Eastern Michigan before conference play opens up.