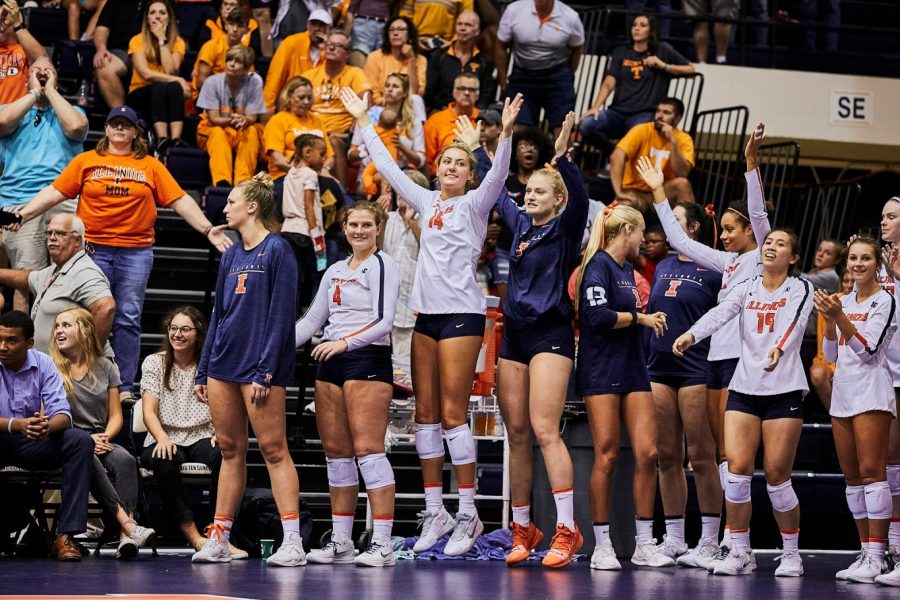 The Illini celebrate after scoring a point at Huff Hall on Sept. 1. Illinois defeated Tennessee 3-2.

The Illinois volleyball team (3-4) headed west to compete in the Redbird Classic over the weekend facing the host Illinois State (7-1), University of Central Florida (6-3) and Marquette (6-2). The team finished the weekend 1-2, only picking up a win against No. 7 Marquette.

The Illini were able to fight back after losing the first set of the match by taking the second set. But, after strong starts by the Redbirds in both the third and fourth sets, the Illini could not secure another set.

The Illinois offense was led by Jacqueline Quade, putting up 17 kills through the four sets. Redshirt freshman Diana Brown recorded her fourth-career double-double on Friday, putting up 25 assists and 14 digs.

Freshman Rylee Hinton had her first action for the Illini in this match and led the defense by putting up eight blocks.

“I knew we were up against some big hitters,” said Hinton. “And I know it’s definitely harder to get the ball through the middle sometimes. The way I’d be most effective is on the block, so I made that my main focus and expected that was what would help my team the most.”

Senior defensive specialist Caroline Welsh led the defense by putting up 20 digs in the match, and the offense was again led by Quade, who earned a double-double with 21 kills and 13 digs.

Other standouts were Hinton, who totaled three blocks in the match, and Brown who reached 51 assists through the four sets.

“I don’t think there was necessarily an issue,” said Quade about the first two matches. “I think collectively ,we weren’t very clean in those two matches, and I think it was things that we know we can do and we knew that we could fix.”

The final game was against the highest-ranked team in the tournament, No. 7 ranked Marquette. Illinois started slow in the match, losing the first two sets. However, after the second set, the Illini won three straight to get their first win of the weekend.

Quade recorded her second double-double of the weekend scoring 21 kills and 11 digs, leading the offense, as she usually does. Junior Megan Cooney contributed 16 kills to the offense and redshirt freshman Bruna Vrankovic chipped in 10.

“Even though we were down, no game is ever over until the last point is played,” said Quade. “I think prior (to the third set) we were doing some really good things. I think we could all feel that things were kind of coming together. Especially the first set, it was super close, it really could have gone either way … I think just having the confidence that we weren’t going to go away, regardless of if we were down or not.”

Illinois will be competing in its final tournament next week before entering Big Ten conference play. It will compete in the Bulldog Brawl in Indianapolis, playing Pacific on Friday and Loyola Marymount on Saturday.