Illini look to win against Cornhuskers 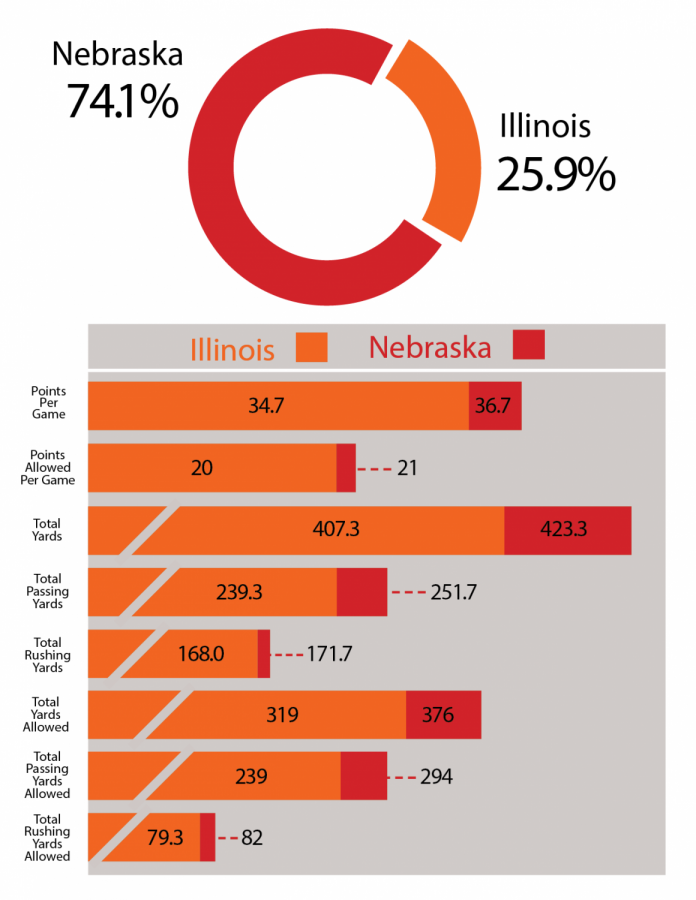 On the heels of a disappointing home loss to Eastern Michigan, Illinois opens up Big Ten play hosting Nebraska under the lights Saturday night. Though the end result was less than ideal, senior running back Reggie Corbin returned from injury and made a splash. Though the Illini offense surpassed the 30-point mark again, the defense simply could not get stops when it mattered most, something head coach Lovie Smith is looking to correct. As for Nebraska, the Cornhuskers have an exciting offensive unit and proved so against the Illini a season ago.

It was a wonderful sight for the Illini on Saturday as Reggie Corbin started after sitting out at Connecticut on Sept. 7, taking little time to reassert himself. The tailback gained chunk plays each time he was handed the ball, and although his workload was slightly less than it will be at full health, Corbin made the most of his touches.

With the Illini trailing 31-17 with 11 minutes remaining, Corbin proceeded to run for 47 yards as Illinois drove down the field, capped off by a 28-yard touchdown scamper. The Upper Marlboro, Maryland native finished the game with 145 yards rushing to go along with the touchdown.

“You saw it,” said Rod Smith, offensive coordinator. “He gives us the element of being an athlete out in space that can make people miss. Reggie has big play ability, so it was good to have him back full speed. We’re gonna need him this week.”

The Huskers high-powered offense will put pressure on the Illini to match them, and having Corbin back gives the unit its best opportunity to do so.

While it’s hard to imagine the Illinois defense being worse than it was last year, Saturday’s performance against Eastern Michigan was not an indication that things are changing.

“Thirty-one points should give you enough, which leads (me) to the defense,” Smith said. “Defensively, (it’s) simple as that, we gave up too many points. Too many big plays in particular.”

Eastern Michigan opened the game fast, scoring two long touchdowns in the first quarter. The offense continued to put points on the board as the game progressed, and just when the Illinois offense thought they had done enough to force overtime, Mike Glass led the Eagles down the field for a game-winning field goal as time expired.

Possibly the most alarming part of Saturday’s performance was Eastern Michigan’s success at throwing deep passes over the top of Illinois’ defensive backs, particularly on its two first-quarter touchdowns

“Eventually it comes down to a one-on-one game, you need to be able to cover,” said head coach Lovie Smith. “We’ve covered better than we covered this past week. We’ll do things a lot better than we did (Saturday).”

Along with their success over the top, the Eagles were generally able to move the ball with ease, outgaining the Illini in total offensive yards 480-464.

Veteran defensive backs Tony Adams and Stanley Green missed the game due to injury along with defensive-tackle Jamal Woods, as the depleted Illini unit just couldn’t get enough stops. The challenge will only get greater from here on out, as Big Ten play opens up Saturday.

A quick look at the Huskers

Quarterback Adrian Martinez has earned praise around the nation as a true dual-threat quarterback.

“Of course, as a runner, he presents a lot of problems,” Lovie said. “When you have a guy that can do both the way he can, he’s a physical runner (and) he’ll make you miss in the open field, just as a ball carrier that’s tough to deal with. What makes him a special player is he can throw the football, too, and he’s athletic enough to buy time.”

The sophomore, who became the first true freshman to start a season-opening game in program history, threw for 2,617 yards and 17 touchdowns last season, adding 629 rushing yards and another eight touchdowns on the ground. Martinez will be heavily targeting junior wide receiver JD Spielman, an 800-yard receiver in both of his first two seasons.

Defensively, the front seven is a strength for the Huskers, led by senior defensive tackle Khalil Davis, an All-Big Ten honorable mention in 2018.

“They’re huge — I mean huge and massive upfront,” Rod said. “They got some new guys inside, 340 pounds and the big man can run (and) move. He’s strong, he’s athletic, and they’ve got a couple big guys, not just him.”

The player Rod could be referring to is sophomore defensive tackle Damion Daniels, who has taken on more snaps than he did as a true freshman.

In 2018, Nebraska’s offense was simply unstoppable in its Nov. 10 meeting with Illinois, as Martinez accounted for over 300 total yards and four touchdowns in a 54-35 victory.

While the glitz and glam of having Frost at head coach and Martinez at quarterback are enviable, Nebraska has not lived up to the hype on the field thus far in Frost’s tenure, finishing 4-8 last season. After losing at Colorado on Sept. 7, the program is still searching for its first road win in the Frost era, a streak Illinois will be hoping to continue.