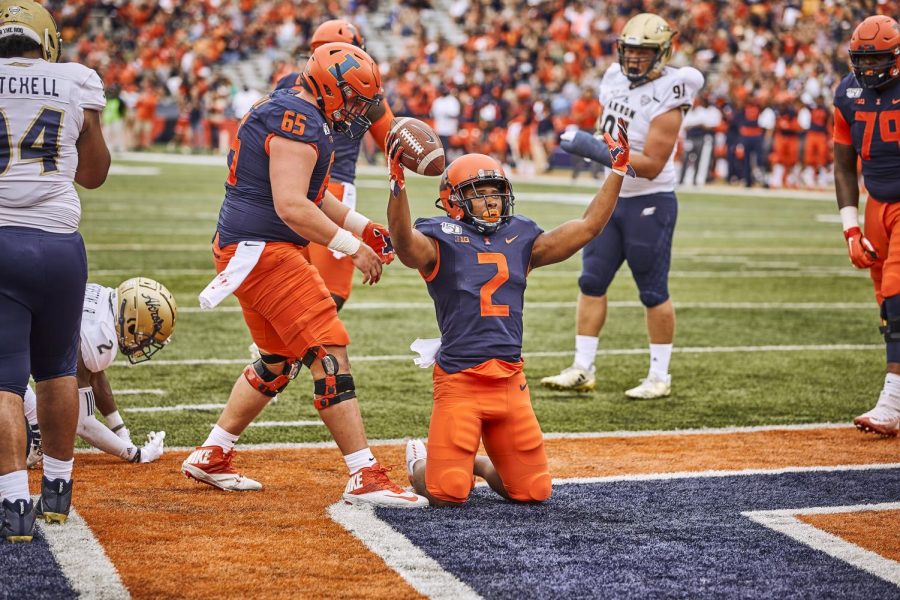 Senior Reggie Corbin celebrates in the end zone after scoringe a touchdown during the Illini’s game against the Akron Zips. Corbin feels pressure in his publicized position, and writing provides an escape.

During the season, he bounces around the backfield, breaks through tackles and rushes for touchdowns. In the offseason, he’s listening to spoken word and putting pen to paper. For Reggie Corbin, it’s about poetry on and off the field.

It’s the way people use words that attracts Corbin to poetry. The same way a song triggers a certain emotion or feeling, poetry does, too. He finds inspiration to write about anything, and the second he does, he quickly jots it down.

“Someone could say the same sentence, and it would mean something completely different based on how they spoke, how their tone was, etc.” Corbin said. “It can be spoke in a room of hundred people, and it can be taken a thousand different ways. That’s what’s powerful to me.”

Corbin has been writing poetry since he was in high school. He took a class for poetry where he began writing his first pieces.

”It all started because it was either take poetry or some other literature class,” Corbin said. “And in my head I was like ‘Alright, my friends and I jokingly rap all the time, might as well try poetry.’ It was probably easier than whatever other courses I would’ve had to take anyway.”

Corbin ended up sticking with it. He’ll listen to Def Poetry Jam, get into a zone and start writing about whatever is on his mind. At least, except for football.

“I have enough of that already,” Corbin joked. “Usually I’ll write about my personal life and things that I feel I don’t need to share with other people. Usually, it’ll be how I truly feel about something.”

Unless it’s for a class or with a close friend, it’s unlikely he’ll share his most personal writing. Usually, there’s a camera in his face or somebody listening. Naturally, as an athlete, he has to be careful about what he says around people. When writing, Corbin feels as though he’s communicating and getting his true ideas across.

“It’s like my therapy,” said Corbin. “That and (NBA) 2k. I feel like when I’m doing it, the world stops, and I can just be myself and say what I want. I feel like that’s a time where even if I mess up or say the wrong thing, god forbid, it’s just on my phone.”

When that world stops, poetry gives Corbin an avenue to write his most personal work. Sometimes he’ll find inspiration and use poetry to write to his mother, who passed away when Corbin was young.

“Of course, it’s an outlet, and I’ll always be able to go back and read it when I need,” Corbin said. “But I’ll write to her. In a sense, it’s my way of talking to her. It’s nice to be able to sit down and write. I can talk to her whenever I want to.”

The most writing Corbin will share could be found on his Instagram page. Each caption is actually a snippet of something else he wrote.

Corbin feels great about the life he has. He deals with more stress than the average student, but he also knows that he’s in a better situation than a lot of other people. He doesn’t see poetry as a way of escaping as much as he does a balance beam.

“When I feel like I’m tipping off, this is what keeps me level,” Corbin said. “A song can really determine someone’s day or mood, can really make them happy. Poetry can do the same thing. I think it’s just a different way to express myself. For me, that’s always a way to relieve stress or get back to being who you truly are.”