Illini served second loss of the season to Cornhuskers 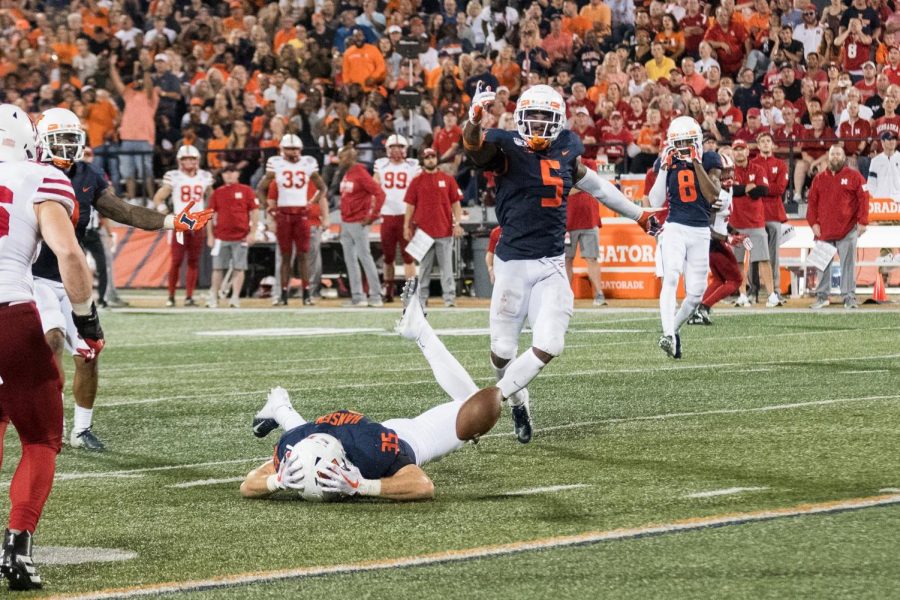 Illinois linebacker Jake Hansen reacts to a missed interception of a pass later ruled as a fumble. Illinois lost to Nebraska 38-42.

Once again. So close, yet so far.

Illini Football fans had every reason to feel good about this game against Nebraska. It was theirs to lose. The Illini comfortably sat with a two-touchdown lead for most of the game. But in the end, mistakes, miscues and mental errors proved to be too fatal. There are positive takeaways for both the offense and the defense amidst the second loss at Memorial Stadium Saturday night, but one bad quarter and a takeover performance by Nebraska’s quarterback Adrian Martinez sealed the deal.

Barring the last second, almost game-tying drive against Eastern Michigan last week, the offense looked noticeably better against Nebraska. The Illini left last week’s heartbreaker with several highs and lows, the latter being nine penalties where the offense effectively shot itself in the foot.

Early on, the Illini made last week’s performance seem like a fluke by comparison. Senior wide receiver Reggie Corbin got the offense off to a great start, escaping the clutches of Nebraska’s defense and capping off a 66-yard run with the first touchdown of the evening. The offense was rewarded handsomely by some big fumble recoveries (more on that later) and capitalized on both in the first half. Aside from one ill-advised pass that turned into a pick from Peters and two unsuccessful snaps from redshirt freshman Isaiah Williams, the Illini had a productive first half offensively.

“We looked really good running the ball,” said head coach Lovie Smith. “Passing game-wise, we have to have more production. We only threw for 78 yards. On nights like this, we have to do some things better. I thought we had some favorable matchups, but it didn’t end up that way.”

Illinois quickly picked up where they left off in the first half. After an unproductive drive by Nebraska, transfer quarterback Brandon Peters looked extremely comfortable on the opening possession of the half. The offense advanced quickly downfield and capped off with a 36-yard touchdown.

The offense continued to capitalize off of major stops by the defense. A forced fumble recovery by senior defensive end Oluwole Betiku gave Peters the opportunity to run the football into the end zone himself towards the second half of the third quarter.

Containing Nebraska’s quarterback Adrian Martinez is a tall task, but Illinois’ defense effectively dictated the outcome of the first half. The defense benefited tremendously from Nebraska’s lack of natural kickers on the field, twice forcing the turnover on downs when the Cornhuskers opted to go for the remaining yardage on the drive.

Senior linebacker Dele Harding forced the first fumble of the evening with just under ten minutes to go in the first, which culminated in an Illini touchdown after transfer receiver Josh Imatorbhebhe caught a 26-yard pass from Peters into the end zone.

Junior running back Ra’Von Bonner had an even easier time getting another touchdown for the Illini after a breakdown on offense led to junior linebacker Jake Hansen recovering the second fumble of the game. Recovering the fumble at Nebraska’s 3-yard line, good defense turned into some very-quick offense.

Martinez began to wake up towards the end of the first half, and as he found holes, he began to start seriously punishing the Illini defense. An impressive drive turned into a big Nebraska touchdown to bring them back within striking distance, and the possession itself seemed like a serious momentum swinger.

After looking poised to tie things back up going into the half, the Illini pushed Nebraska from field goal range to the midfield, stopping a potentially rattling sequence going into the break.

After opening the half with a quick stop, the Illini were at Adrian Martinez’ mercy on their second drive. One big defensive breakdown led to an easy carry into the end zone by Wan’Dale Robinson.

Adrian Martinez looked poised to work his magic and push Nebraska out of their own end zone. He managed to get as far as the 40, but after a 20-yard pass to JD Spielman, Tony Adams knocked the ball out of the receiver’s hands to force the third fumble of the game.

Finally back in their groove by the middle of the third, junior defensive lineman Ayo Shogbonyo forced another fumble that was recovered by Betiku, giving the offense another first and goal that led to a Peters touchdown.

“Defensively, whenever you take the ball that many times you normally have a chance to win,” Smith said. “That’s what gave us an opportunity to win. But we have to tackle better. We had them in favorable situations, but just not being able to complete plays really hurt us.”

It’s just a shame that an otherwise solid display from the defense was effectively undercut by Adrian Martinez. Finishing the game with 327 yards and three touchdowns, Martinez came alive in the fourth quarter.

Nebraska opened up the quarter scoring after getting to the Illini end zone to close the third. An Illini team that at one point looked like it was going to run away with a Big Ten opening win started the quarter tied all. They only managed a field goal in the fourth quarter, a 47-yarder by kicker James McCourt.

By now, the Illini defense was entirely worn down. It appeared as though the Illini would have an outside shot at escaping Memorial Stadium victorious after a Parkey-esque field goal attempt clanked off the upright. But the offense was clearly out of rhythm on its final drive.

After suffering four forced fumbles, Nebraska sealed the game by forcing a fumble of their own. Although the ball was recovered by the Illini, the subsequent turnover-on-downs meant a second consecutive heartbreaker at home.

The first three quarters were far from flawless, but any game a team comes into the third with 35 points, forced fumbles, several turnovers, the lead for as many as two touchdowns the entire game and a favorable penalty situation, is a game one would expect to win. But once again, it was an inability to close the night out that cost the Illini their first Big Ten win.

“We had 14-point leads throughout.” Smith said. “Those are games that you need to win.”