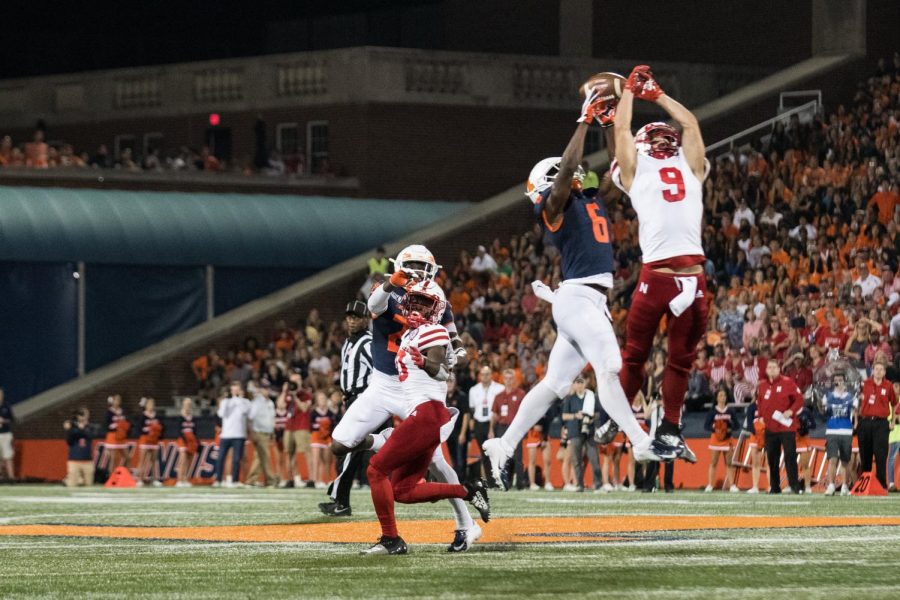 Illinois defense breaks up a pass on Saturday. The Illini led 21-14 at halftime against the Cornhuskers before choking in the fourth quarter.

Ahead of Saturday night’s matchup, it was clear Illinois’ offense was going to have to generate points to keep pace with Nebraska. However, just as critically, the Illini defense was going to have to get stops on key situations as well for a victory to be in the cards. Ultimately, head coach Lovie Smith’s defense just could not stop Scott Frost’s offense, as Illinois fell 42-38.

The prospect of an Illini victory looked strong early on. Senior running back Reggie Corbin took the second play of the game 66 yards for a touchdown to give Illinois an early 7-0 lead.

A common theme of the night was turnovers, and Illinois forced its first of the game as Nebraska fell short attempting to convert on fourth down on their first possession

After regaining possession, the Cornhuskers turned the ball over again when quarterback Adrian Martinez fumbled in his own territory, and Illini linebacker Jake Hansen fell on the loose ball.

Illinois then capitalized, and Brandon Peters found receiver Josh Imatorbhebhe for a 26-yard touchdown to put the Illini up 14-0.

Despite falling behind, Nebraska would not let the game slip away. Martinez led the Cornhuskers down the field and capped off the drive with a Patrick Mahomes-esque side-arm throw to tight end Jack Stoll for a 6-yard touchdown.

In the second quarter, yet another Nebraska fumble set up a Ra’Von Bonner walk-in touchdown, but Nebraska again responded with a Martinez touchdown pass to freshman Wan’Dale Robinson, who took a majority of the reps at tailback despite being a receiver.

A Dre Brown 36-yard touchdown run restored Illinois’ two-touchdown lead to open the third quarter, but the combination of Martinez and Robinson connected again for a 3-yard score to keep the Huskers close.

Another fumble gifted possession back to the Illini as the Cornhuskers were threatening to tie, and the offense took advantage of the short field. Peters flashed fancy juke moves to reach paydirt from 10 yards away to give Illinois a 35-21 lead.

Though the lead may have felt safe to some, missed tackles and assignments by the Illini defense allowed the Cornhuskers to hang around all night.

“(We) have to tackle better,” Smith said. “We had them in favorable third-down situations and missed tackles, and not being able to make some plays really hurt us.”

Nebraska answered Peters’ run with a drive of its own culminating in a 14-yard touchdown scamper for Dedrick Mills, though the extra point was blocked by tackle Calvin Avery.

The Illini could not pad the lead, and the Cornhuskers reached the endzone courtesy of Mills again to put them within two, and a Martinez run on the two-point attempt tied the game at 35.

A 47-yard field goal from James McCourt restored the Illinois lead for a brief period, but the Nebraska offense was simply too potent, taking the ball and moving down the field as Robinson’s 1-yard run made the score 42-38 Huskers.

With Nebraska set up to score one final touchdown to put the game out of reach, the Illinois defense came together and miraculously forced a field goal attempt, which Nebraska kicker Lane McCallum clanked off the left post.

The stage was set for Peters to lead the offense on a game-winning touchdown drive, but as was the case most of the night, the passing attack just could not get going. The Illini threw four incompletions, although Peters missed one snap due to losing his helmet.

“We did some good things running the ball, but passing game-wise, we have to have more production,” Smith said. “(There’s) no other way to put it.”

On the night, the Illini rushed for 251 yards, but Peters could only muster up 78 yards passing.

Defensively, the Illini could not keep Martinez and his teammates. from doing whatever they wanted as the Cornhusker quarterback threw for 327 yards and three scores will run for an additional 126 yards.

“We gotta wrap up tackles. We gotta try to get that ball out every time we can,” said defensive-back Tony Adams. “When we get (the other team) down, we gotta put our foot on (their) throat. We gotta finish.”

Receiver-turned back for the night Robinson finished with 95 yards and a score rushing to go along with 79 yards and two touchdowns receiving. JD Spielman added 159 yards receiving, despite taking multiple major hits in the air.

In total, the Cornhuskers earned 32 first downs and 690 yards of total offense, a number that did not leave defensive captain Jake Hansen too pleased.

The Illini (2-2) now head into their bye week on a two-game losing skid and will next be in action at Minnesota on Oct. 5.