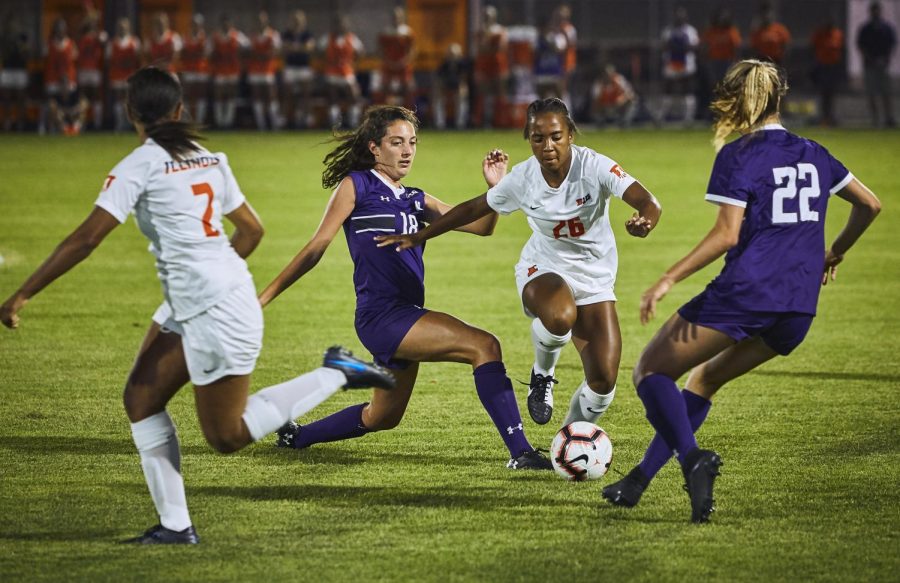 The Illinois soccer team defeated Northwestern 3-1 Friday in the Big Ten season opener at Demirjian Park. The match marked the 24th time both programs have met and head coach Janet Rayfield’s 200th career win at the helm of the program.

Since beginning her coaching career with the Illini in 2002, Rayfield has risen as the Illinois coach with the most overall victories, conference wins, single-season wins and NCAA Tournament appearances in lieu of her 200th career W.

During Rayfield’s tenure, she has led the Illini to two Big Ten Championships in 2003 and 2001, one NCAA Elite Eight appearance and received accolades including 2011 Big Ten Coach of the Year and the 2015 NSCAA Award of Excellence. The decorated coach was also a two-time national champion during her playing career at North Carolina.

But to celebrate her new coaching milestone, Rayfield was doused in a postgame Gatorade shower, courtesy of seniors Jaelyn Cunningham and Lexi Carrier.

Rayfield said she was unaware of the 200-win milestone and directed her focus toward the match and Illinois’ performance.

“We played our best soccer tonight,” Rayfield said. “That’s what we’ve been talking about is just continuing to be better versions of (ourselves), and I’m really proud of the way that we played tonight and fortunate that that exclamation point of 200 happened alongside that.”

In their last meeting, the Illini lost to the Wildcats 2-1 in Evanston, but the Illini holds a 13-8-3 edge in the series after Friday’s contest.

Illinois Athletics also had a World Cup promotion, although it wasn’t mentioned during the game.

But despite the promotion, Illinois soccer has strong ties to the World Cup. Rayfield coached the U-20 and U-23 U.S. National teams and worked as a scout for the 2011 and 2015 World Cups. She applies those skills to her coaching career at Illinois.

“Any time you go to an event like that, especially on the world stage, the team of people working on that is tremendous,” Rayfield said. “You play one small role, but you really start to understand that every role that everyone plays in something like that is important. And you really can bring that back and share that story.”

Friday night’s match got off to a quick start but tapered off after Illinois’ first goal. In the first half, senior forward Kelly Maday scored at 12:13. However, the rest of the half featured no scoring, despite both teams taking four shots apiece, each with one shot on goal, in the first period. Illinois also closed out the first half with one save.

The wildcats showcased scrappy play with six fouls compared to the Illini’s two in the first half.

The second half of the game saw three times the number of goals than the first, with the Illini scoring two within the first 15 minutes.

At 47:53, Illini junior midfielder Hope Breslin scored to make it 2-0. Breslin is tied with sophomore forward Makena Silber for most goals scored this season with four and leads the Illini despite a position change to center midfield.

“Last year, I played a different position,” Breslin said. “Playing center (midfielder) just means a different role for me. So being more involved, helping out the forwards defensively and attacking-wise going forward, just trying to be as active as I can.”

Senior midfielder Arianna Veland scored for the Illini at 59:18 to give Illinois a 3-0 advantage on their home turf.

“It definitely felt really good,” Veland said. “We’ve definitely been preparing for this for the last few weeks, and I’ve made it a point to try to get into the attack more, so just being able to do something positive and be able to get it into the back of the net just really felt good.”

Northwestern finally answered back at 79:46, when Illinois had a handball penalty, and the Wildcats’ Regan Steigleder scored on a penalty kick.

The Illini move to 7-1-0 on the season with a 1-0 record in the Big Ten. Illinois will play at Iowa Thursday.