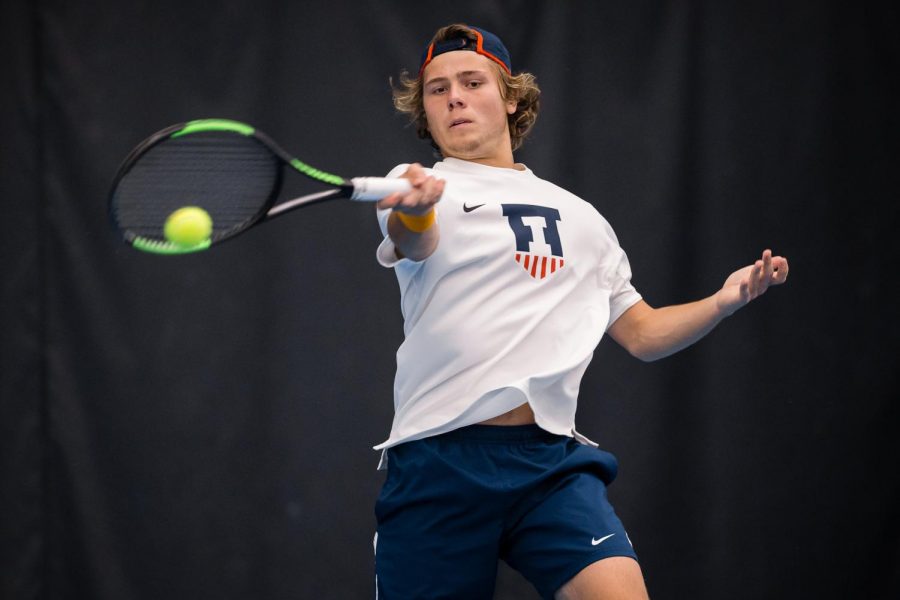 This past weekend, five Illinois tennis players competed in two different meets in Milwaukee, Wisconsin and in South Bend, Indiana, to open up the fall season. The players played a combined 21 games and racked up a total of nine wins over three days of competition.

Redshirt freshman Alex Bancila made his debut for the team at the Bobby Bayliss Invitational at the University of Notre Dame. After losing his first four matches, Bancila battled back to defeat Western Michigan’s Arjun Honnappa, 8-5, in his final match of the weekend.

In doubles competition, Horve and Bancila struggled, as they fell to Nebraska’s duo of Cacciatore and Albert Sprlak Puk, 6-4, and Louisville’s Sergio Hernandez and Fabien Salle, 6-4, before narrowly losing to Louisville’s Tin Chen and Randy Wilson, 7-5, on the final day of the meet.

Senior Zeke Clark, sophomore Siphosothando Montsi and senior Vuk Budic made their season debuts at the Milwaukee Tennis Classic, racking up five total wins over the course of the tournament.

Clark entered the tournament with the first overall seed and emerged victorious in his opening round match, defeating Mississippi State’s Nicolas Ocana Lavoie in straight sets, 6-4, 6-0. Clark won his second-round match against North Carolina State’s Rafael Izquierdo Luque (6-2, 6-2) before falling to ninth-seeded Axel Nefve (Notre Dame) 6-4, 4-6, 6-3, in the round of 16.

Montsi also triumphed in his first-round matchup, emerging victorious over Saint Mary’s College of California’s James Watt in straight sets, 6-3, 6-1, before University of Southern California’s Mor Bulis, the seven seed in the tournament, eliminated him from the competition, 6-7(6), 7-5, 6-2.
Budic started his fourth year with a win, squeaking past University of Kentucky’s Millen Hurrion 7-6(4), 5-7, 6-4. Following his first-round victory, Budic fell to University of California, Berkeley, junior Jack Molloy, the tournament’s fourth overall seed. After dropping the first set, 6-1, Budic fought back and won the second set, 6-4, before eventually narrowly suffering defeat in the third set, 7-6(5).

In doubles competition, Illinois’ duo consisting of Montsi and Budic, barely took down Florida Atlantic University pair made up of Jason Legall and Maxime Lapraille, 9-8(6), in the opening round of the competition. Illinois’ tandem went on to lose their second-round match to Tennessee’s Mark Wallner and Pat Harper, 8-4, ending their hopes of making a deep tournament run.

Junior Alex Brown will make his season debut on Thursday at the Oracle ITA Masters in Malibu, California, as the 21st overall seed, representing the University of Illinois and the Big Ten at the competition. Brown will compete in both singles and doubles. He will also team up with Illini junior Asuka Kawai in the mixed doubles tournament.