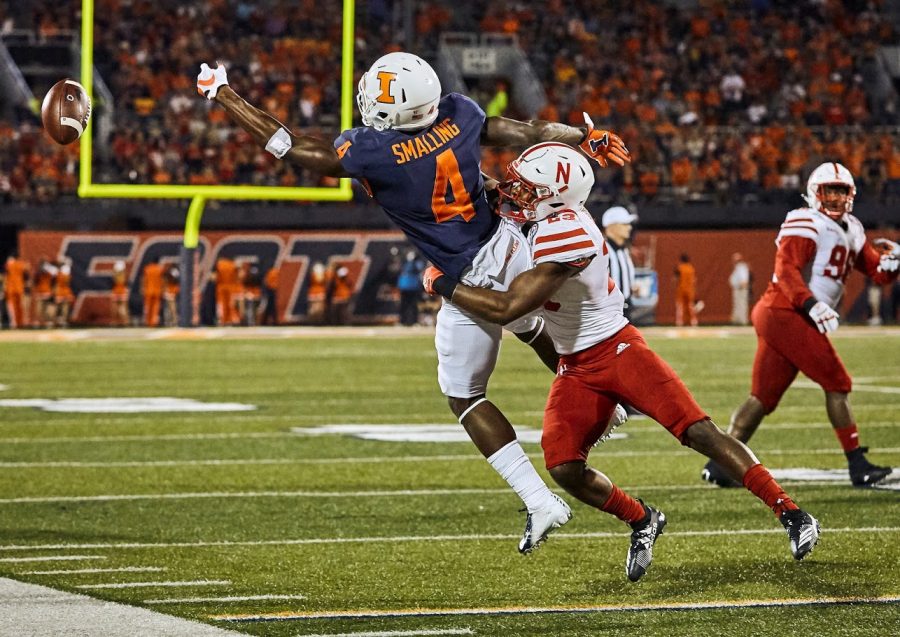 Ricky Smalling attempts to receive a pass vs Nebraska on Sep. 21.

Coming off a second consecutive loss in which the offense put up over 30 points, all eyes have been on Illinois’ defense.

Despite being coordinated by a defensive specialist with NFL experience, the unit is almost exactly the same as it was last season, statistically. Head coach Lovie Smith took the defensive reins during the offseason, showing intent that the defense would improve, however, opponents are still ripping the Illini with relative ease this season, gaining 407 yards of total offense per game on average.

One of the main issues the team faces is giving up chunk plays in the passing game due to both missed tackles and poor coverage.

Smith is known for being committed to cover-two defense, also known as the Tampa-two, a system he found success with during his time in the NFL. The main staples of the system include pressuring the quarterback with just four rushers while dropping linebackers into coverage and playing safeties deep to take away the vertical passing game and force check-down throws.

Thus far in 2019, only one level of the defense is doing its part. The Illini defensive line has found plenty of success this season, evidenced by junior Oluwole Betiku leading the nation in sacks. However, it’s when quarterbacks escape the line’s grasp where Illinois gets into trouble.

One way the cover-two defense falters is with linebackers who are dropped into coverage and can’t make tackles on short throws, a problem which plagued Illinois against Nebraska.

“We give up way to many yards of offense,” said junior linebacker Jake Hanson said. “We force some takeaways but (it’s) not good enough.”

The 42-38 loss was filled with moments Illinois looked to have Nebraska’s Wan’Dale Robinson and Maurice Washington stopped, only for the playmakers to break tackles and pick up first downs.

Another area where the cover-two can be broken is if deep-sitting defensive-backs get beat over the top, an issue which was exposed by Nebraska’s J.D. Spielman, who went for 160 yards receiving against Illinois. While a talented receiver like Spielman having success may be understandable, it’s highly concerning that Eastern Michigan’s receivers were able to expose those same flaws in their victory over Illinois.

Aside from schematics, Illinois’ defense also suffered from being overworked in both losses thus far, as the offense has had long spells of consecutive empty possessions in both games.

Against Nebraska, the Huskers possessed the ball for over 14 minutes more than the Illini, running 36 more plays as well.

Another contributing factor to the defense staying on the field is its inability to get off the field on the third down.

“(When) you get worn down, you miss tackles,” Smith said. “You don’t finish a play a play when you’re exhausted, but we can control that too by getting off on third down.”

Nebraska was able to convert 11-19 third downs during the Sept. 21 matchup, compared Illinois’ 1-12, a contrast that certainly does not bode well for success.

With a week to prepare, Smith’s unit may have some tricks up its sleeve heading up to Minnesota, but the Gopher passing game is on fire.  Quarterback Tanner Morgan threw for 396 yards and four touchdowns on Saturday, and receiver Tyler Johnson is widely considered one of the upper-echelon receivers in the conference.

Defense, and coverage and tackling in particular, are going to be the difference between another sub-par season and a possible bowl berth, and Saturday’s matchup with Minnesota is likely to be the game that will determine which of the two outcomes Illinois will endure in 2019.