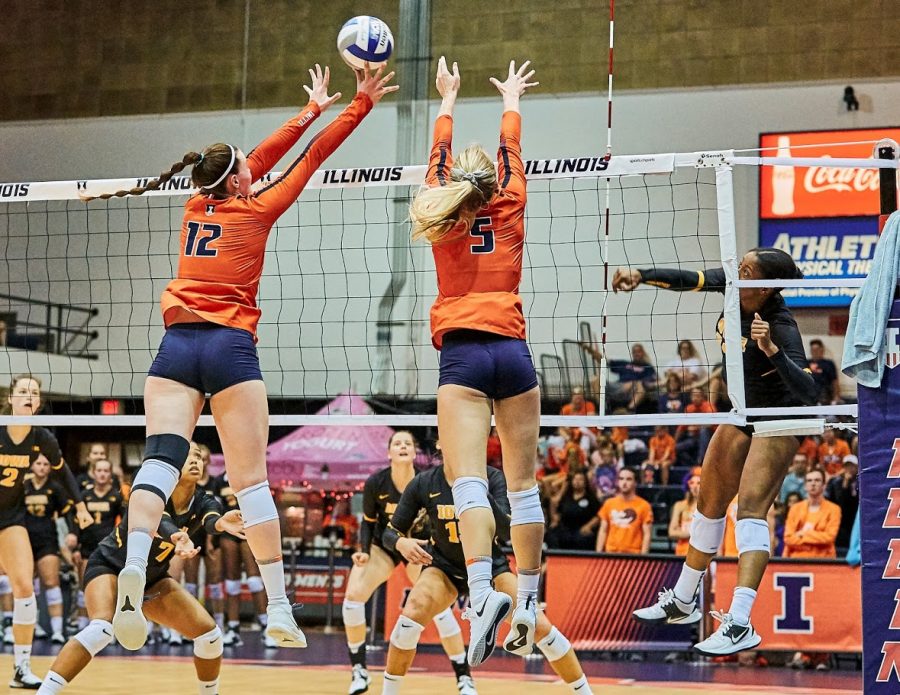 Ashlyn Fleming (12) and Diana Brown (5) jump to block a ball at Huff Hall vs Iowa on Saturday.

Approximately 4,152 fans stuffed Huff Hall Friday night to watch No. 20-ranked Illinois’ Big Ten home against No. 3 Nebraska. The last time the Illini and Cornhuskers met was during last year’s NCAA Final Four when Illinois fell to Nebraska 2-3 so upsetting one of the best teams in the country was the main focus for Illinois as it kicked off its Big Ten season following a 5-4 nonconference stretch.

But, the Illini fell short of the upset, as they lost to the Cornhuskers 3-2.

The Illini faced the Iowa Hawkeyes in their second game of the weekend at home Saturday. Illinois came out strong, didn’t look back and swept its first conference opponent of the season.

Against Nebraska, Illinois struggled with attack errors in the first set as it recorded 10 errors with only nine kills. Through the first set, Illinois hit a -.030% on 33 attempts. In comparison, Nebraska had a hitting percentage of .321% and only had three errors to go along with 12 kills.

“I thought we were taking good swings throughout the match,” said head coach Chris Tamas. “Even in the beginning when we were erring a lot, I felt like the swings were there we were just missing by an inch, pretty much. That’s just the margin that we play with.”

The Illini dropped the fourth set, forcing a fifth set for the fifth time this season. The Illinois offense stalled in the set, only picking up six kills compared to Nebraska’s 11, handing Illinois the 15-10 set loss.

“I feel like we all fought collectively,” said freshman Kennedy Collins, who scored six kills and three block assists in the match. “I have no regrets from that game, we all don’t. It’s just the little things that we need to fix, but I think we played great.”

The Illini revered their first set struggles against Iowa, winning the first set 25-21. This was only the second time in 11 games the team has won their first set. The Illini hit .243% while limiting the Hawkeyes to .071%.

The team was able to carry that momentum to the second set where they won 25-18, with the set sealing kill coming from senior Ashlyn Flemming off an assist by redshirt-freshman Diana Brown. The Illini had 17 kills in the second set compared to the Hawkeye’s seven. These kills along with the four blocks the Illini scored in the set helped them push past Iowa.

The Illini fought off the Hawkeyes one last time in the third set, by going on a 4-1 run to close it out after being tied at 21. The Illini’s four aces in the last set, compared to the Hawkeye’s zero, might have been the difference in the match.

“This was actually a big game,” Brown said, who had six kills along with 38 assists. “Last night we could’ve said, ‘Oh it was a tough five-setter coming in here, you know our legs are tired or whatever,’ but I thought we came out ready to go right out of the gates.”

The Illini’s aggressive serving style has resulted in more aces this season, but their serving also comes with its downside. The Illini totaled 16 service errors in this game alone, coming up with only five aces to show for it.

“Not great from the aspect of I thought we got a little rushed tonight,” Tamas said. “I just think that’s more mental stuff than anything … It’s just a reminder to take the time and go through the routine.”

Illinois will have a week to recover from this weekend before the team travels to Indiana and No. 15 Purdue on Friday and Sunday, respectively.