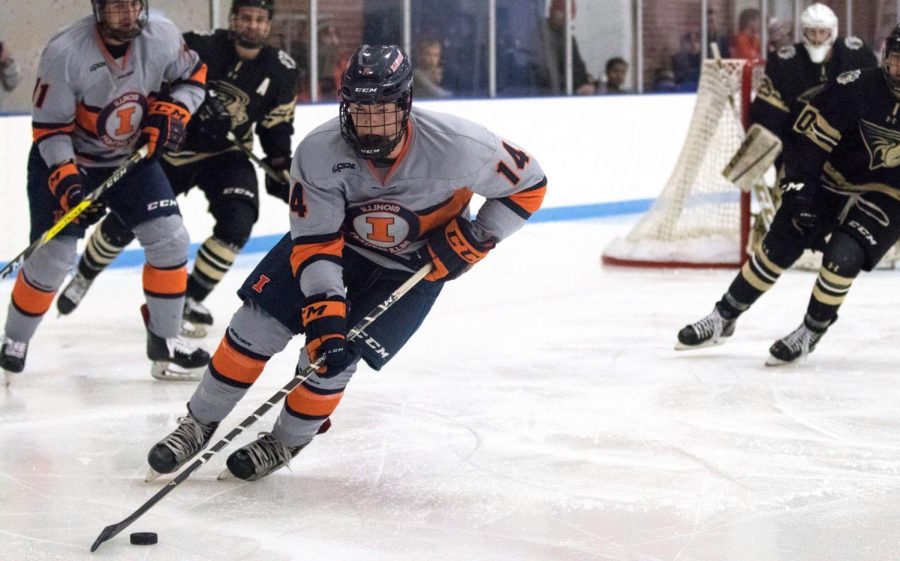 Although the team made it harder than it had to be, in the end, the result Illinois hockey wanted still came: a season-opening victory over Illinois State.

Behind an incredibly strong defensive performance and a clutch goal from junior forward Thomas Kolaz in overtime, the Illini (1-0) were able to hold off in-state foe Redbirds (2-2) in overtime 3-2.

The first period started off quietly for both teams offensively, with each goalie being able to make big stops to keep the game deadlocked at 0-0. Eventually, after a physical defensive start, Illinois was able to crack the scoreboard first with a wrist shot from their returning leading scorer, senior forward Bobby Ernstring.

Less than one minute after Ernstring tie-breaking goal, a mini fight broke out that resulted in freshman forwards Zach Hayes and Braden Stewart facing penalty time, giving the Redbirds a power-play opportunity, a common occurrence of the night. However, the Illini defense was able to lock down the Redbirds and head into the 2nd period with 1-0 lead and the momentum.

“It took us a little while to get to it in the first period,” head coach Nick Fabbrini said. “But in the last five minutes of the 1st period, we really got into our game and scored our first goal.”

The Illini wasted no time carrying that momentum into the second period, extending the lead to 2-0 a minute in the period with a goal from Kolaz.

Illinois would continue to control much more of the 2nd period, finishing the second period with 16 shots on goal compared to just four for Illinois State. The Redbirds, despite having six power plays, were not able to get a lot of shots for most of the game.

“We did a good pressuring the puck,” Coach Fabbrini said. “We did a really good job of that, and [Illinois goalie] Barney did a good job, too.”

Despite Illinois dominating the 2nd period statistically, Illinois State was finally able to score on Illinois senior goalie Jake Barnhart with 9:23 left, with forward Nate Viberg taking advantage of a turnover to score a breakaway goal.

Much of the third period was a stalemate, with the Illini successfully clearing out the puck and playing prevent defense. With 6:37 left in the third period, Barnhart was able to make back-to-back stops while on the ground, preventing the Redbirds from tying the game momentarily.

With just a 1:51 left in the third period, Illinois State was finally able to cash in on their sixth power play when Brandon Hay scored unassisted with a goal that snuck in on the bottom right. Illinois was unable to respond with their own goal in regulation, forcing overtime.

Despite now being tied, coach Fabbrini didn’t panic, and all he did was tell his team how he felt.

“I told them we were the better team,” he said. “As long as we stayed man on man defensively, we got a chance to win.”

With just five minutes of overtime before going to a shootout, both teams came over physical and desperate, making big plays to keep their team’s chances alive.

With just seven seconds left before a shootout, Kolaz was able to step up and slap in his second goal of the game, this time unassisted, allowing the Illini to escape with a 3-2 victory.

With the victory, Illinois improves to 1-0 on the season and will hold on to their No. 11 ranking in the nation. With so much returning talent—eight of Illinois’ 10 top scorers from last year returned—Coach Fabbrini expects huge things from this team and doesn’t view just a tournament bid as a success.

“If we don’t put a number on a banner, a tournament championship or national championship, I think it’ll be a big disappointment,” Fabbrini said.