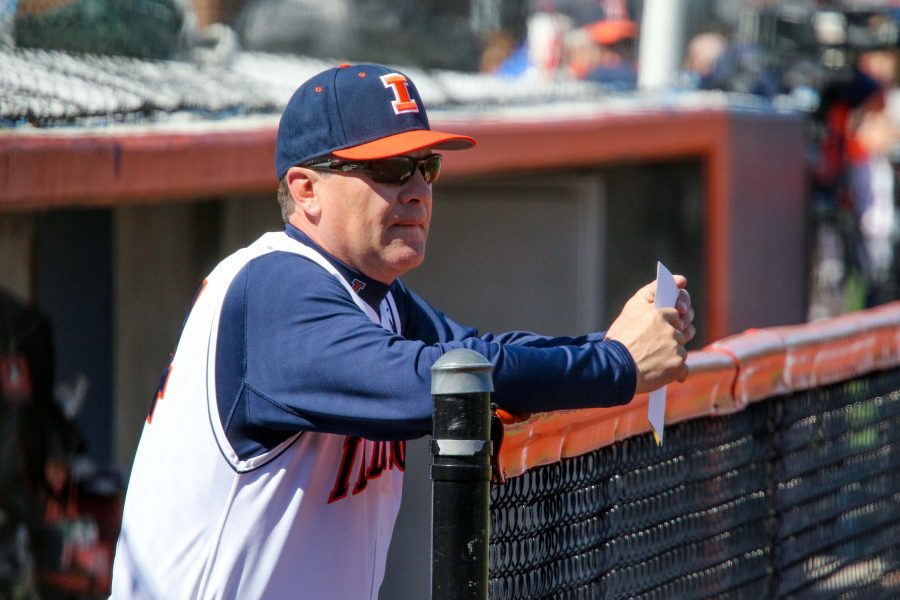 Baseball head coach Dan Hartleb (24) looks on to the field before the baseball game against Purdue at Illinois Field on Saturday, April 11, 2015. Illinois won 10-5.

Our friendly neighbors to the north are best known for maple syrup, universal health care, hockey legend Wayne Gretzky and for being home to the 2019 NBA champions, the Toronto Raptors.

Canadian athletic programs often venture down past their southern border to compete against American teams — and this week, the Illinois baseball team will welcome the Great Lakes Canadians to Illinois Field for an international exhibition.

Monday’s matchup between the two programs marks the first meeting of the teams, but the game is not the Illini’s first experience with international competition. Last fall, Illinois traveled to Curaçao and Aruba, playing six games against both countries’ national teams.

A driving factor behind the Great Lakes Canadians exhibition is the program’s Illini connection. Illinois baseball alumnus Chris Robinson currently serves as Director of Baseball Operations for the Great Lakes Canadians. During his time in the orange and blue, Robinson was First-Team Big Ten Conference in 2004 and 2005 and well-decorated for his performance behind the plate. Robinson went on to be drafted in 2005 and made his MLB debut with the San Diego Padres in 2013 before retiring from the game.

Head coach Dan Hartleb served as an assistant coach while Robinson was a player at Illinois, giving him a unique perspective on inviting the Great Lakes Canadians to Illinois.

“Chris Robinson has been one of the players that has been a great representative of Illinois baseball,” Hartleb said. “He’s a great human being and did a great job academically and athletically while he was here. (He’s) a guy that really stays in touch with the program, so I’m looking forward to spending time with him.”

For returning members of the team, this fall schedule could not be more different from the previous year’s. Being home instead of on the road for most of the fall gives veteran players the chance to help new teammates get used to playing at home at the college level.

This also presents them with opportunities to prepare for the spring, such as developing a home game routine now rather than during the spring season.

“It’s always good people out here seeing what they have in the new guys, (letting) the young guys see people in the stands,” said junior left-handed pitcher Jimmy Burnette.

Monday also closes out the Illini’s fall ball schedule. Hartleb and his team will be back in action in the new year, as they open their spring schedule in February with a tournament in Tempe, Arizona.